LONDON, United Kingdom — The fashion industry’s “see now, buy now” experiment is underway. Over the last few weeks, brands including Tom Ford, Burberry, Tommy Hilfiger and Ralph Lauren staged their first shoppable runway shows, enabling customers to buy their collections immediately after they debut on the catwalk, with the aim to translate the interest and excitement generated by runway shows into sales.

BoF spoke to key brands and retailers to gauge the impact of the “see now, buy now” shows in the hours, days and weeks that followed, with some reporting sales spikes immediately after the runway shows.

“We had our largest Tom Ford day of the year immediately following his New York show,” revealed Joshua Schulman, president of Bergdorf Goodman and Neiman Marcus Group International. “Typically, these sales would be spread over many weeks as the deliveries arrive piecemeal. The immediacy of being able to buy immediately after the show, combined with the impact of seeing the whole collection on the floor at once, gave our customers a sense of urgency to buy now.”

In turn, the new Burberry collection — which showed at London Fashion Week on Monday — sparked “an instant uplift in sales,” according to Michael Kliger, president of MyTheresa.com. 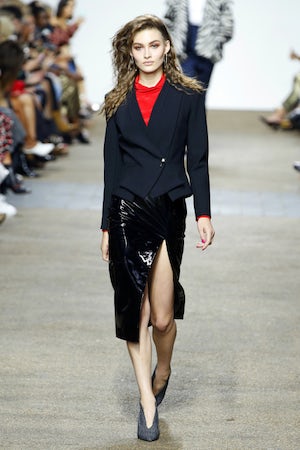 Data provided to BoF by retail analytics platform Edited, which tracked global sales on the e-commerce sites of Burberry, Ralph Lauren and Topshop Unique, which all staged shoppable shows, showed that three items from Burberry’s 175-piece “see now, buy now” womenswear collection have sold out since the show (a cashmere sweater, a cashmere top and a bowling shirt).

At the time of publication, Topshop had also sold out of three fresh-off-the-runway items. Ralph Lauren’s collection was all still in stock, but the $14,998 Western-inspired Houston suede coat had only one of nine SKUs left and the Quincey tailored jacket ($2,290) had two of nine SKUs left.

Contemporary label Rebecca Minkoff recorded a large sales increase after its shoppable runway show, which took place on the street outside the brand’s New York flagship on Saturday 10th September. For that weekend, sales across its stores and website increased 168 percent, compared to the weekend after its runway show last year. (Most of the uplift was driven by sales in physical stores, some of which hosted livestreaming events during the show, but online sales also saw a double-digit increase.) “We beat our best day ever by about 25 percent and we were only open for half of the day,” said co-founder and chief executive officer Uri Minkoff.

At other retailers, however, the “see now, buy now” shows did not trigger sales increases. E-commerce platform Lyst, which lets customers shop from a range of websites, did not experience a spike in orders for Burberry, Tommy Hilfiger, Tom Ford or Topshop in the days following their runway shows.

However, the shows did lead more searches on Lyst for these brands than after previous fashion shows, suggesting that the “see now, buy now” format is helping generate consumer interest, if not immediate sales.

In terms of the “see now, buy now” product categories generating the most sales, brands and retailers reported a mix of attention-grabbing runway pieces and more accessibly-priced products like cosmetics and eyewear.

People seem to be gravitating towards the very decorated, ceremonial jackets, which surprised me as they are very extravagant jackets.

“People seem to be gravitating towards the very decorated, ceremonial jackets, which surprised me as they are very extravagant jackets… I was kind of surprised how quickly those are being bought,” Christopher Bailey, chief creative officer and chief executive officer of Burberry, said in an interview on Tuesday, following Monday’s show. He added that customers were also gravitating towards the pyjama- and bathrobe-style womenswear pieces, and the ruffled shirts for men.

Data from Edited confirmed that Burberry’s $5,249 Cavalry jacket — a deep red wool jacket with military-style braided regalia — and its $723 panama stripe silk shirt are among the best-selling items since the show.

Meanwhile, Bergdorf Goodman reported “a strong halo effect across the [Tom Ford] brand including women's and men's ready-to-wear, accessories and beauty,” said Schulman. “What surprised us was how the event spurred awareness of the brand to a wider audience, including those buying beauty or eyewear for a piece of the dream.”

But while the “see now buy now” shows had an immediate impact on sales for some brands and stores — especially those like Burberry and Rebecca Minkoff, which hosted events for customers in in their physical stores during the shows — the real test will be in the coming months, to see if sales tail off, if the brands and retailers replenish items that sold well right after the show and if “see now, buy now” leads to higher sales for the full retail season.