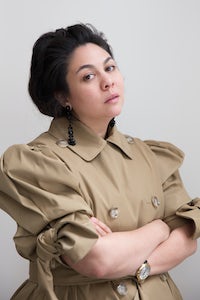 NEW YORK, United States — Inside the windows of Simone Rocha’s new store on Wooster Street, wedged between Céline and Moschino in New York’s Soho, a series of red, textured arches frame a row of mannequins. She designed them as a way to honour her Spring 2017 show venue — London’s Southwark Cathedral — and bring part of the runway show experience to shoppers. “That’s what really drives me — that creativity,” she said on Wednesday. “I want that to come into the stores. My influences, whether it’s the art or the installations or the fabrication — that’s what’s most powerful for me. That’s my superpower.”

But Rocha’s creative talent, showcased in runway shows filled with her signature sense of subversive femininity, is not the only reason she is the lone young London-based label to open retail stores on both sides of the Atlantic. The 30-year-old Irish designer is as pragmatic as she is creative. She has managed her business shrewdly, benefitting from a strong internal compass as well as the invaluable advice and support of her parents, John Rocha, the famed Irish Chinese designer, and Odette Rocha, who played the role of business partner to both her husband and daughter. 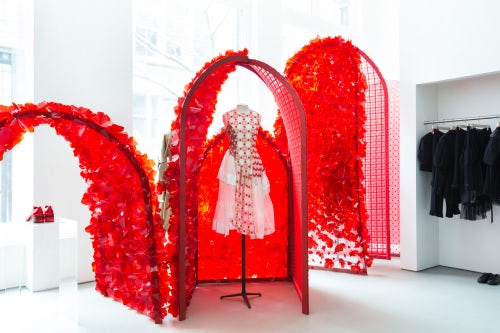 “It’s funny now, because I was always John Rocha’s daughter,” chuckled Simone Rocha. “Now people say to him, ‘Are you Simone Rocha’s father?’” In December, she won British Womenswear Designer of the Year at the newly revamped Fashion Awards, formerly the British Fashion Awards, which bestowed her father with the honour of Designer of the Year in 1993. But the shift in recognition began as Rocha opened her first store on London’s Mount Street in 2015.

It was a major turning point for her label, which has been profitable every year since its launch soon after Rocha graduated from Central Saint Martins in 2010, thanks in large part to a strategy spearheaded by her mother: build accounts with independent boutiques before taking on larger department stores.

“I believe it is much better to start with independent stores for a few seasons, get the profile right, prove you can deliver quality product on time and, when the collection is sufficiently developed, to then introduce department stores and online accounts,” said Odette Rocha.

Dover Street Market and Colette bought the first Simone Rocha collection and are still important partners. “What [my mother] really brought to the table with her experience was that, at the root of it, you need a good quality product,” said Rocha.

That’s been part of our power, not expanding too much and being able to say no.

Her father, for his part, provided advice culled from his own 30-year career in fashion. “From day one, when Simone wanted to start her own label, I advised her to put a good foundation in place — from financial control, sales and marketing to production — and build a good and loyal team around her,” he said, making clear that his daughter ultimately makes all the company’s decisions.

As Rocha prepared to open her Mount Street store, she realised that she needed to expand her product offering beyond her handmade runway creations. “It’s like the floodgates opened,” she recalled. “Before, I only wanted to sell things that were in the show. I was very protective and still am, but at the same time, now I want more people to be able to be a part of it.”

Rocha set herself to the task of commercialising her aesthetic, a process she has come to enjoy. “It’s a new discipline that I have been developing, which is actually something that I’ve learned from my mother,” said Rocha. “Her focus has always been on the product while I can get very suffocated with the whole vision of the show. I’m a very emotional designer.”

“Simone has built her own pillars,” said Alexandra Shulman, former editor of British Vogue. “Early on she knew the power of the accessory and has been able to make that a part of what she can offer. She merges a delicate beauty in the fabrics with something very grounded so that you can imagine wearing her clothes, not just looking at them."

Indeed, with accessibility in mind, Rocha expanded into new categories and fabrications at price points under $1000: knitwear jersey, cotton poplin, jewelry and “refined” bags and shoes. And instead of tackling them separately from her runway pieces, she decided to design each season — from $5,000 coats to $150 earrings — with a unified approach to aesthetic and materials. “They do need to connect but also, I think about it in a practical way,” she said. “It then benefited all our wholesalers, and I think they were all thrilled to see more product.”

As a result, more stores began carrying the label in the US, led by independent boutiques such as Ikram and followed by major department stores such as Nordstrom. Rocha now has 160 wholesale stockists. “Regardless of trend or fashion moment, Simone Rocha’s collections, and the women who wear them, march to their own rebellion,” said Olivia Kim, vice president of creative projects at Nordstrom. “That’s really what I love about her.” 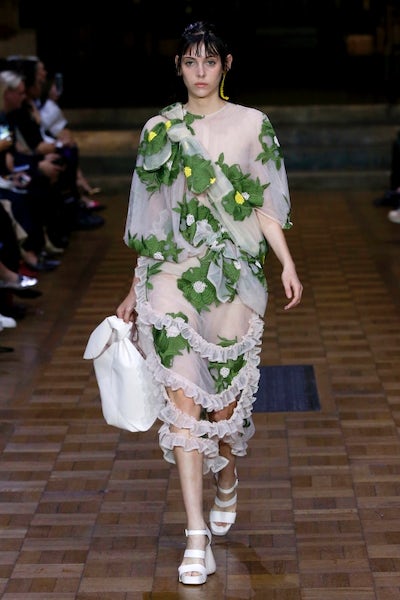 North America is now Rocha’s second-largest market after Europe (including the former Soviet Union). “America is a real growing business for us now,” said Rocha. “And because Mount Street is profitable, that allowed us to have the funds to open Wooster Street.”

The designer said the label has grown steadily, about 20 percent year-over-year in recent years, earning about $3 million in accumulated profit since launch at current exchange rate. Rocha declined to reveal sales revenue.

Today, the designer is more independent than ever before, and her mother has taken a step back from active management of the company. “We are expanding all the time and now I’m actually working with my mom in a little more of a non-executive role — just on a personal level,” said Rocha, adding that she is very close to her parents even though they live in Ireland.

The company now boasts a team of about 25 to 30 people. The designer owns 100 percent of the shares in the business and develops strategy with financial director Donal Bolger.

Rocha credits her brand's solid footing to not overextending her retail commitments, limiting collaborations and, most importantly, not producing pre-season collections. “We develop all the fabrics ourselves, all of the handknits, all of the embellishments,” she explained. “So I would rather focus on doing two really strong shows a year, and then make sure that we can be clever about it and break it down throughout the year and [that] people feel satisfied.”

Indeed, what really drives Rocha is the six months of research and textile development that go into every runway show, and the excitement of bringing to life this emotional journey for customers. At the moment, she has no intention of shortening that incubation time by adding more seasons.

“That’s been part of our power, not expanding too much and being able to say no,” said Rocha, adding that the brand has experienced no significant setbacks since inception. However, the designer knows the uncertain macro environment, especially the UK's upcoming exit from the European Union, will have negative consequences for her London-based business. “It’s such difficult and disappointing times,” she said, adding that 'Brexit' would also impact her manufacturers in the UK, Portugal and Italy. “It’s very concerning what the future will hold.”

As a result, Rocha plans to take more care not to overextend her business, even as she has sights set on a third store in Hong Kong, where her father is from. She is currently partnered with I.T. there and wants to expand her business in the region.

But all in due time. With two days to go until her New York store opening and a week to go until her Autumn 2017 show in London, the designer has more immediate concerns — and plenty to celebrate.

How Brexit Will Impact Fashion in 2017