Around the World in 81 Designers

Around the World in 81 Designers

LONDON, United Kingdom — When the Great Exhibition opened in 1851 in a specially made Crystal Palace in London’s Hyde Park, it showcased a dazzling display of design, innovation and exotica from the furthest corners of the world. A century-and-a-half later, here we are again — this time, without the imperialist bent — at the International Fashion Showcase at London’s Somerset House.

The labyrinth of high-ceilinged rooms that form the East Wing have been taken over by 27 countries, each one staging mini-exhibitions that act as a voyage into their worlds; the ambience is like that of a friendly United Nations conference. Designers and curators from around the world mingle. While anti-globalist, nativist politics are on the rise across the world, the atmosphere here indicates otherwise; which doesn’t mean to say these currents went unexplored in the clothes on display.

The International Fashion Showcase began in 2012 as part of London’s Cultural Olympiad, when the British Council launched a number of cultural programmes around the city. Now in its fifth year, the initiative began as a simple map to a collection of exhibitions held in embassies and high commissions around town. Today, the showcase has grown to become a central part of the London Fashion Week schedule and is now open to the public and sponsored, for the first time this season, by Mercedes-Benz.

“It’s about showcasing narratives from around the world that are quite different to what we see in the news and even hear from friends who have visited,” says Sarah Mann, director of the architecture, design and fashion department at the British Council. “Often fashion is spoken about as an economic exchange, especially in government circles, but there is a cultural exchange too — and we want to highlight that.”

Often fashion is spoken about as an economic exchange, but there is a cultural exchange too.

Labels must be no more than five years old to qualify and the British Council creates a shortlist of contenders by partnering with cultural bodies and partners in each participating country. The final selection is made by Sarah Mower, the influential fashion journalist and chairperson of the International Fashion Showcase’s advisory panel, along with fellow panelists including Fabio Piras of Central Saint Martins; Natalie Kingham, the womenswear buyer for MatchesFashion.com; and veteran publicist Karla Otto.

Mower says she is constantly searching for meaning in fashion and has found plenty of it here. “It’s the very youngest people from every continent who are invited here at a time of their life when they can be the freest to express their aspirations and what worries them and what they’re thinking about,” says Mower. “That frees it to be non-commercial, which doesn’t mean that [they] won’t have a future in the business.”

Every year has a different theme and this year’s was “Local/Global,” which became the starting point for the collections on display. “Something can be local and global simultaneously,” reasoned Niamh Tuft, who is in charge for cultural programming for the British Council. “We always think of fashion as very much a global industry but it does have roots in things that are far removed, like agriculture or trade routes. One of the designers traced Dutch ceramics, which are very much recognised as Dutch, back to the historic trade routes to Japan. There are always similarities and crossovers between different countries, which may not seem obvious.

“There’s space for both designers who are influenced by ethnic and traditional dress and techniques, and those interested in more personal narratives,” added Tuft. “We’ve always found the most successful designers are those that manage to make that translation of something that is a personal or local narrative to the global industry. Narrative is what’s important in showing a public audience there is a rich thought process behind clothes.”

The winners of the International Fashion Showcase’s “best in show” prize were deserving of their award. While Indian fashion is perceived as colourful, festive and highly embellished, the group of designers in this show focused on their country’s pastoral tribes and their crafts, often completed in small, slow production — shattering stereotypes of Bollywood camp.

“I hate that word fusion,” said Karishma Shahani Khan, one of the designers exhibiting. “We are trying to create something that is just as much a part of Indian heritage that will appeal to people in India, as well as a global market.” 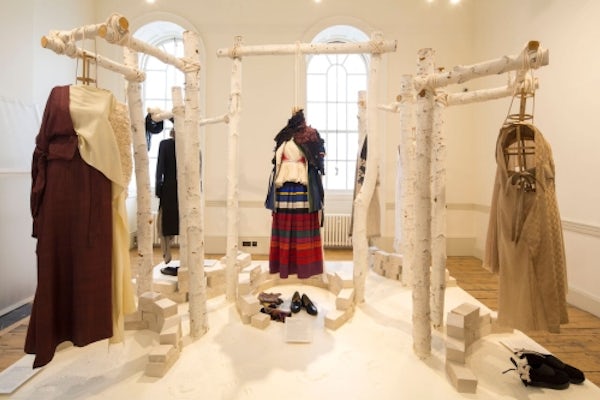 Her design, a layered style inspired by the Rabarl community in Kutch, western India, employed hand-woven indigenous fabrics and surface ornamentation such as traditional techniques of tie-dye and mirror work.

Next to her was menswear designer Alan Alexander Kaleekal, whose draped look was inspired by a pastoral tribe indigenous to the isolated Nilgiri hills of southern India and crafted from the softest Pashmina cashmere, cruelty-free Tussar silk mixed with waste silk yarns and cashmere wool. It took over 60 days to make, and he says the garments made by the tribe are so precious that they’re often offered as wedding dowries.

“65 to 70 percent of clothes shopping in India is centred around the wedding market,” said Jaspreet Chandok, an organiser of Lakmé Fashion Week. “The younger designers in India are refocusing on sustainable Indian textiles and a global aesthetic.” It helps that the government is investing in the handloom industry, which is the second biggest employer in the country, at a time when the luxury industry is struggling. The designers on show here showed alternatives to the traditional image of Indian fashion, but poetically highlighted the stories of many Indian tribes and communities that go unnoticed on a global, and domestic, scale.

“I think because of our past, the post-communist heritage, we treat waste as a resource,” said Agnieszka Jacobson, artistic director of Poznań’s School of Form, which was established in 2011. The designers on display all hailed from the college, and had a keen desire to recycle waste materials and draw on communist-era kitsch.

“The current generation grew up with parents whose childhoods was during the time of communism and had knitting and sewing classes at school. They’ve passed on their creative skills of making things to their children.” 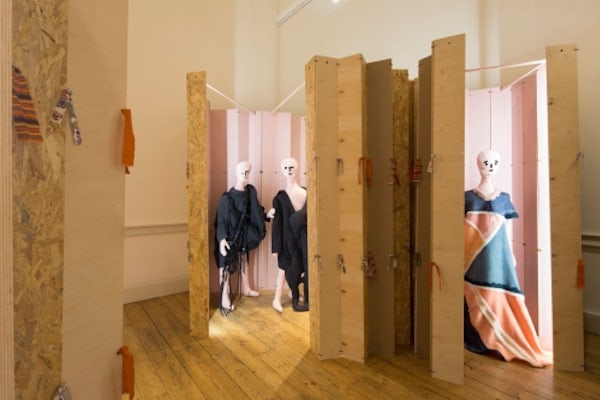 One designer, Agata Birek, transformed old woollen blankets into colour-blocked capes; another, Jagota Fryca, used fabric scraps and waste materials to update mass-produced athletic footwear, offering ideas for personal customisation of the objects that are so ubiquitous in the world.

“It’s about slowing down the fashion world which is running faster and faster,” added Jacobson. “We are constantly pushed to buy new items; maybe we should use items as a resource.”

The Korean contingent devoted their line-up to the ‘bojagi’, the traditional Korean wrapping cloths that have been used for over a thousand years. From food coverings to pouches for precious objects, embroidered or patchworked, traditional Korean bojagi wrapping cloths have been appropriated and transformed for myriad uses, becoming a metaphor for transportation, transformation, sharing and exchange. 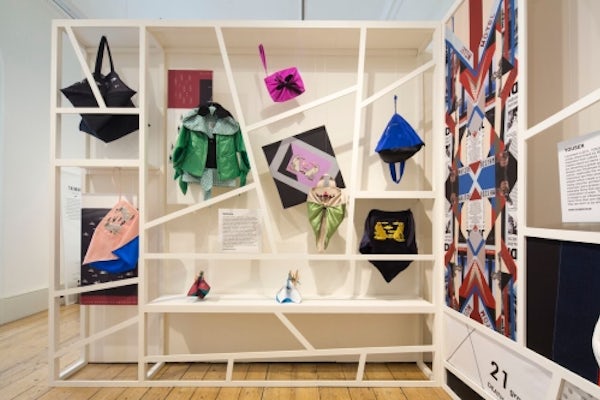 Each designer explored the unique object with verve; Softcore, a label founded in 2012, turned it into silk bags with traditional Korean prints, the artful ties acting as handles; another, Youser, used the idea of patchwork to create an original digital print that drew on pop culture references.

The shining star, however, was Younchan Chung, who launched his menswear label, The-Sirius, last year in Seoul. Chung made a giant quilted bojagi to match his architecturally-minded pieces, in a single neutral tone, with exposed stitching and zips. It was so impressive that it won him the Mercedes-Benz award for Best Designer and a spot on the Milan Fashion Week schedule.

During the era of Soviet communism, decorative bus stops were built throughout rural Ukraine. Some are covered in mosaic and others are architecturally sculptural; a sight for sore eyes in the desolate landscapes that they often sit in. For the showcase, Ukrainian artist Sasha Burlaka built a replica of one of the bus stops, with the destination atop reading ‘Europe’ in Cyrillic letters. 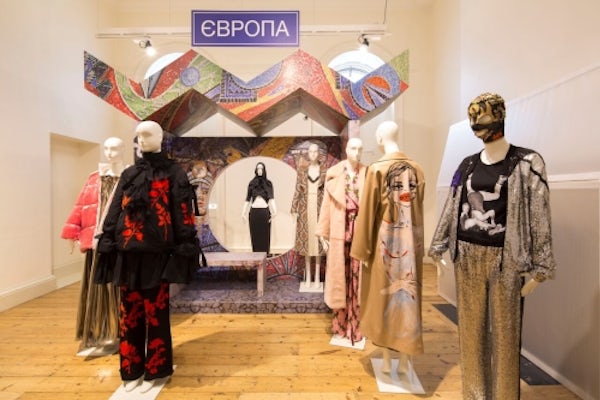 “We are trying to go somewhere, but the direction is still unknown,” explained Alexandra Dmitrievich, the exhibition’s curator. “Because the economy is not great in Ukraine at the moment, and because of all the political tensions, the fashion designers are looking to Europe to make a mark and support their businesses.”

The pieces on display did not look like traditional eastern European dress, but rather a glittering display of objectively good design, including a gold ruched gown from Frolov and a hand-painted leather coat by Alina Zamanova.

“Because of the economic situation, the younger generation are finding ways to hustle,” said Tafadzwa Mojo, the man behind Kidd Hunta, one of the labels displayed as part of the ‘Next In Line’ showcase, curated by Somerset House’s Shonagh Marshall. Established in 2015, Kidd Hunta conjures the entrepreneurial spirit of Harare’s determined street vendors in a sartorial homage to Zimbabwean resilience. “They are on the street selling lots of things and have a very streetwear aesthetic,” added Mojo. 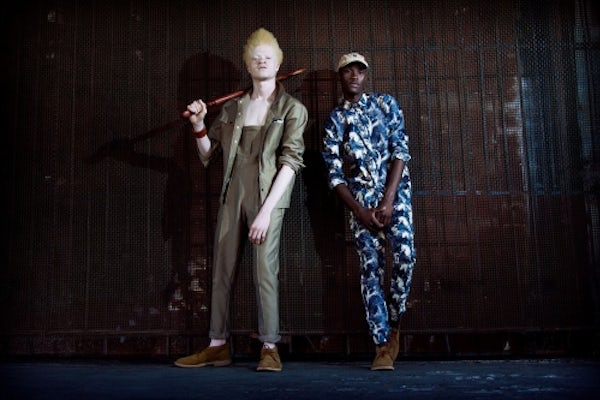 His single look features a print inspired by rock paintings at Bushman Rock in Harare depicting hunters and gatherers. It was made from fabric bought from a local supplier, made by four Zimbabweans and flew 5,148 miles to be in London.

“We used to have a vibrant textiles industry before the depression, and now we only have two factories. The guys who worked for the factories are now doing small-scale tailoring. We have a slogan for the label: ‘Brave Hearts Never Fail’, which is about not whining and going out and fighting for it.”

In London, From Emerging Designers to Emerging Businesses?