NEW YORK, United States — Ohne Titel, the New York-based label founded by Parsons School of Design graduates Alexa Adams and Flora Gill in 2007, is closing. Spring/Summer 2016 will be the last season the collection is available through a network of retailers that grew to include Isetan in Tokyo, Japan, Boon the Shop in Seoul, Korea, and Saks Fifth Avenue across the US. The Autumn/Winter 2016 collection, which was shown at New York Fashion Week in February 2016, will not be produced.

Debuting in 2007, Ohne Titel quickly amassed an international following that included top fashion editors and buyers like Francesca Burns and Carine Roitfeld. Adams and Gill were finalists for the CFDA/Vogue Fashion Fund in both 2009 and 2011, and it was during this period that the brand repositioned from a designer price point to a lower advanced contemporary price point, tripling its revenue along the way. By 2010, the label was turning a profit and managed to remain profitable until its closure. So what went wrong? 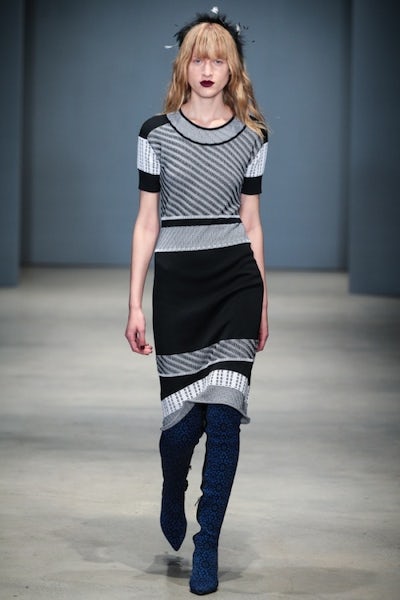 "We had gotten as far as we could get with our current structure," Gill says. "We needed a partner that could offer more strategic knowledge and experience about business, marketing, and tech. Then we could focus on the design, quality, and have time to be more visible to our customers. We needed a team member with experience who could better help weigh the advantages and disadvantages of various opportunities short- and long-term. What we needed was a strategic partner."

Unlike many of their peers, Adams and Gill did not secure external investment. This, combined with increased competition, made their business difficult to scale. Annual revenue for 2015 was $2.5 million.

“When you don’t get huge investments and you’re constantly reinvesting your own profits into the business, it’s slow growth,” remarks Tank magazine chief executive and fashion director Caroline Issa, a longtime supporter of the label, who has worked with the designers on runway shows. “It’s tough to be a small business and a small brand. It means that you are not only being creative, you also have to do so much of the administrative work — the stuff nobody thinks about.”

Working with department stores in particular creates a long list of administrative duties and fees that upstart labels may not be prepared to handle, from being EDI compliant — adding trackable barcodes to each garment — to charges for not meeting specific shipping requirements. Many stores also ask for discounts on large orders, not to mention exclusivity, which limits a brand's opportunity for growth within in a certain region or market. What’s more, larger brands often hire an employee to monitor its position on a department store floor and check with the store's sales team on a regular basis to ensure they are educated about the label, something a young company typically can't afford.

“It’s sad to hear, but at the same time they are extremely talented,” Issa continues. “To be able to create a collection for runway that is almost all sold at wholesale is such an incredible skill set, and a total advantage.”

For Adams and Gill, one of the biggest challenges of all was only having a few years of work experience before starting their business. (Although they did work under a number of top designers, including Karl Lagerfeld.) “I don’t think designers right out of school understand very well how to merchandise; what gross margin is; how to manage relationships with retailers,” investor Gary Wassner recently told BoF. “[The market] is so complicated today that unless you have a support structure around you in a new venture, you’re going to make major mistakes… I think you learn that with experience at other brands.”

“Because we started when we were in our 20’s, there was a really steep learning curve,” says Gill. “We had to learn about every single aspect of the business in ways that they don’t really prepare you for in school or even in other jobs, because it’s just so hands on,” she continues. “I think that we learned so much from that, which we can take forward into new projects.”

As for the future, Adams and Gill say that they aim to continue working together in some capacity. “We have at least 10 really interesting options in the works. Some plans involve working together and some do not,” says Gill. “In the near term, we are working on some fun and creative projects together.”

While details were scarce, it’s clear that Adams and Gill want to shift their focus away from the traditional wholesale model. “We feel like we started this in a completely different landscape when the business of fashion really evolved around retail sales,” explains Gill. “But the landscape has changed in a really exciting way. It’s a great opportunity to have a different conversation with the customer and a different way of doing fashion.”

“They have developed a following and a reputation for incredibly beautiful, wearable and inexpensive knitwear that stood the test of time," says Ikram Goldman, owner of the Chicago-based retailer Ikram, which has carried the line since 2008. "It’s important to recognise that they took their training and have mastered it into their own collection, which I hope to see [again] in the near future. Those girls are not going to go away."