PARIS, France — Parisian fashion house Balmain is getting a new logo for the first time in 70 years. To collaborate on the refresh, creative director Olivier Rousteing enlisted design studio Adulte Adulte to update the brand’s primary signifier from a traditional inline typeface to a minimalist sans-serif font.

For Balmain chief executive Massimo Piombini, the tweak represents more than a simple change in lettering. Since his arrival in April 2017 from Valentino, where he was worldwide commercial director, Piombini has observed the public’s obsession with Rousteing, whose singular, social-media-fuelled vision has given the label a new kind of status.

Rousteing, who succeeded Christophe Decarnin in 2011, proved that lukewarm-at-best reviews from critics were no match for an Instagram following of more than 5 million and plenty of celebrity clients — notably, the Kardashians. By 2015, Balmain had grown to a reported €121.5 million in sales, driven almost entirely by pricey ready-to-wear.

Secretive Qatari investment vehicle Mayhoola — which also owns Valentino, Pal Zileri and a stake in Anya Hindmarch — paid a handsome sum for Balmain in a deal that valued the business at €500 million, at a multiple around 14 times EBITDA. So far, the gamble seems to be paying off. Piombini, who was installed by Mayhoola, said that 2018 revenues are up 20 percent year on year. He said that the business will have doubled in size by 2019 from three years earlier when it was acquired, indicating that 2019 sales will be upward of €240 million. 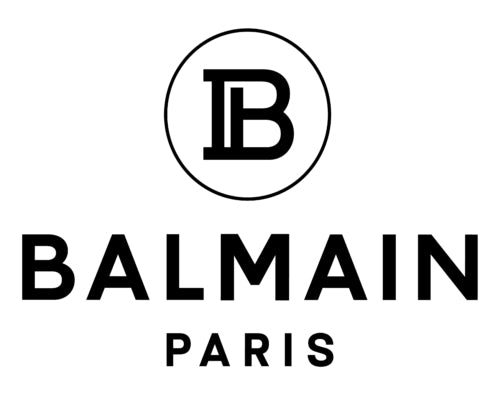 But Balmain is still a niche player compared to megabrands like Chanel, Louis Vuitton and Gucci, which each generate billions of dollars a year. And to take Balmain over the billion-plus-dollar threshold, the executive has embarked on strategy aimed at fine-tuning several elements of the business.

“Our challenge is that our audience is bigger than the size of the brand,” Piombini said.

It’s no coincidence that Balmain has introduced its new logo just as the company is ramping up on accessories, hiring an in-house team to manage sales and production for the category, which has highly favourable retail economics and is the cornerstone of the luxury fashion market yet remains radically underdeveloped at Balmain. The brand first introduced handbags in January 2017 in what Piombini characterised as a soft launch. (Production and logistics were handled by the Valentino team.) And, currently, 80 percent of the business remains high-end ready-to-wear, which has a limited audience and is far more difficult to make profitable than bags.

Now, buyers at Balmain’s showroom in Paris are getting their first taste of Rousteing’s fully-fledged vision for handbags, embossed, of course, with the new logo and a monogram harvested from the archives. Plans to launch a cosmetics range are also in the works, although the company would not comment on the beauty strategy.

Piombini said that, since his arrival, the company has also closed the lowered-priced Pierre Balmain diffusion line and rebalanced the prices of its ready-to-wear. While the label used to make headlines for its outrageous price tags — in 2010, it sold a ripped-up, hole-infested t-shirt for $1,625 — it’s now more in line with its competitors. For instance, a double-breasted wool-twill blazer is currently selling on Net-a-Porter for $2,195. A logo t-shirt is $250. “The goal is to make it more affordable without diluting the brand equity,” Piombini said.

The goal is to make it more affordable without diluting the brand equity.

The brand is also targeting wealthy fans who shop its showpieces with the formal introduction of a couture capsule collection, which will be presented to VIP customers at the brand’s new flagship at 374 rue Saint Honoré in Paris during January's haute couture Week. Piombini was quick to emphasise that this was not a return to official haute couture — which it stopped producing in 2002 — but instead an opportunity to give “a little bit more justice to this line,” which was already being sold behind-the-scenes to big spenders.

Opening more stores is also on the agenda. Right now, Balmain directly operates just 20 stores across the globe; direct retail makes up only 18 percent of the business. (When Piombini arrived, it was just 5 percent.) But the pace at which those outposts will open is likely to be slower than it might have been in the past. The goal, he said, is to increase number of stores to 40-to-50 locations over the next three-to-four years, with 35 percent of the business eventually coming from direct sales.

“Ten years ago, it would have been easy to say, ‘I want to have 150-to-200 stores in the next five years,’” he said. “Now it’s a little bit different.” Instead, the team is pushing third-party online sales: Balmain.com has seen double-digit percentage growth in the past year, but it’s unlikely to ever attract the volume of traffic that flows to leading multi-brand players like Net-a-Porter, Farfetch, Matchesfashion and MyTheresa. Improving the quality of the in-store experience at physical multi-brand retailers by renegotiating terms, creating-shop-in-shops and moving away from more “generic” sections to more “personalised” areas of the store is another focus. 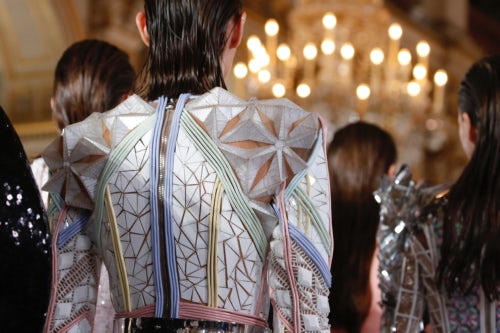 But how to get more consumers to show up? Piombini said building an in-house communications division focused on the intersection of “entertainment, innovation and technology” was an essential first step. In many ways, Rousteing’s popularity — especially with other influencers — has made that easier: the company insists it does not pay celebrities to wear Balmain. But how does one mobilise — and better monetise — what the designer calls his Balmain army?

Aligning publicly with Rousteing’s inner circle — such as outfitting Beyoncé at Coachella — is part of strategy, as was the company’s 2015 collaboration with H&M. But there are also efforts to make the designer the content. Next year, this will include the release of a documentary called “The Wonder Boy,” which will depict both his professional and personal life.

"Olivier Rousteing has a pivotal role in this strategy," said Mario Ortelli, managing partner of luxury advisors Ortelli & Co. "From one side, he is gaining traction with the younger consumers and from the other, thanks to the relaunch of the couture collection, is trying to revive its relationship with the fashion opinion makers."

And yet, Balmain’s future success is far from guaranteed. While Piombini remains bullish on potential growth in Asia, luxury sales growth in many regions of the world is slowing. Most notably in the Middle East, where drops in oil prices have decelerated spending.

Piombini said that most of Balmain’s Middle Eastern customers shop the brand outside of the region for historical reasons — at present, the license for the men’s business in the region is owned by another company, and the women’s stores are run by a local franchise operator. But he insisted that the Middle Eastern tourists business — a significant driver of sales for the brand — is “healthy.”

Then there is the question of Balmain’s parent company, Mayhoola, which is thought to be building a budding luxury group to rival the likes of LVMH and Kering. Earlier this fall, rumours swirled amongst bankers that Mayhoola was entertaining a sale of Valentino, its crown jewel acquired in 2012, to Kering, amid slowing sales. Piombini, who worked in private equity before joining Valentino, said that the owners are committed to Balmain for the long haul.

“They’re brand builders. When they see an opportunity, they not only buy the brand, they develop the brand,” he said, adding that the company is taking the long view.

Why Would Mayhoola Pay Such a High Price for Balmain?