NEW YORK, United States — Veteran makeup artist Gucci Westman is basking in the newfound freedom of being her own boss.

After a dozen years creating runway looks and readying the faces of celebrities like Emma Stone and Drew Barrymore for campaigns as artistic director for some of the biggest global beauty brands — which also came with exclusive contracts — Westman said she is finally free. Free to partner with any designer or fashion label, free to use whatever makeup or skincare label she wants and free to talk about it — on social media, to the press or to whoever she pleases.

Last week, she was the lead makeup artist for the Brock Collection and Khaite shows during New York Fashion Week. Westman said she used Chanel eyeshadow and eyeliner alongside foundation from her own collection on models — facts she would have been in breach of contract for disclosing when she worked for competing makeup brands, which typically include strict exclusivity clauses.

“Everyone sees through it and no one wants to only hear about one brand. The professional loses their credibility,” Westman told BoF, calling the exclusivity clauses a “real mistake.” “The whole reason they’re professionals is because they use different formulations [and brands] and have this wealth of knowledge. They aren’t one trick ponies.”

The beauty industry’s role at fashion week is changing fast. Where once only an elite few editors and celebrities were allowed to witness an artists’ work before a show – the talent interviewed for this story identified the late 80’s and early 90’s as a heyday of backstage beauty – social media now gives anyone a virtual backstage pass. Cosmetics brands hire influencers to create content around the shows, while many of fashion’s favourite beauty artists, including Westman, Pat McGrath, Charlotte Tilbury and hairstylist Sam McKnight, have brands of their own to promote.

The explosion of real-time backstage content has forced brands to step up their fashion week activities, even as the returns are less certain. That shift has divided many in the industry – Westman calls the endless stream of behind-the-scene videos and photos “tired,” while McKnight says backstage beauty “means now more than ever before.” Ultimately the answer lies somewhere in between: Will the smudgy black eyelids at Jeremy Scott or crimped hair at PH5 really influence consumer habits? Probably not. But like the shows themselves, backstage beauty remains a key element in driving brand awareness and maintaining relevance, not to mention that beauty brands sponsoring shows is hugely important to offset designers’ costs. 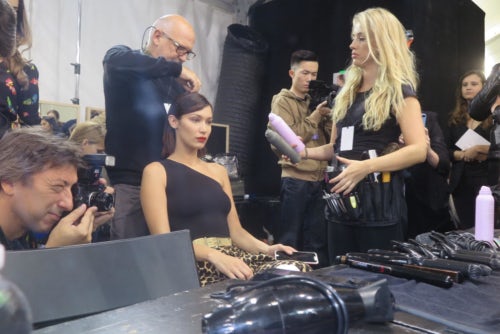 “If the show is sponsored by a big brand I’ll only use their product. Luckily most of my shows are not sponsored by a beauty brand so I’m free to use my own products,” said McKnight, who will sponsor (supply himself, products and a team) four shows during London Fashion Week: Roland Mouret, Michael Halpern, Ashish and Ryan Lo.

For Maybelline, it’s no longer enough to just sponsor a show; there needs to be corresponding activity that lives beyond the runway. The L’Oréal-owned company has sponsored a steady stream of, on average, 10 shows per Fashion Week season for the past decade, but the makeup giant realised the biggest bang for its buck is flying influencers in from all over the country to attend shows – and pray they chronicle their experiences on social media.

Additionally, through a Glam on Demand service that launched last September, Maybelline sends artists to the homes and hotels of influencers, celebrities and editors to help prep for shows. Again, the hope is that the recipients of these makeup services will talk about the experience on social media.

But it was only through trial and error that Maybelline arrived at its current strategy. The brand learned an important lesson a few years ago: a runway isn’t the place to launch or sell new items. Maybelline introduced a mascara and eyeshadow at the Rebecca Minkoff show in September 2016. Despite an elaborate presentation – beauty influencer Amanda Steele conceptualised the makeup look, Minkoff used her social media prowess to promote it, top fashion influencers Arielle Charnas and Chriselle Lim walked the show and Amazon was a retail partner – it was a flop.

“We want to give our new items their moment in time so it doesn’t get caught up in the clutter,” Whang said.

Summer McKeen, a 19-year-old YouTuber with almost 2.2 million subscribers, attended her first show, Kate Spade, as a guest of Maybelline. All costs associated with McKeen’s trip were covered by the company, though she wasn’t paid an additional fee or obligated to post. While she was in town, though, McKeen worked on future projects with the brand that she was compensated for. 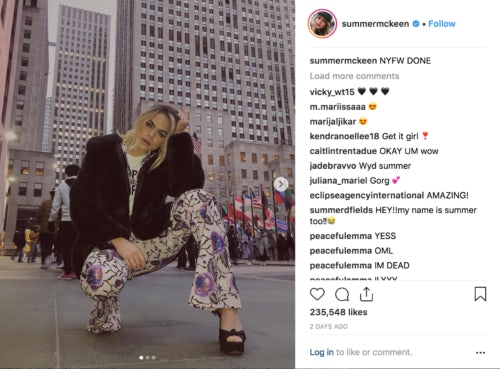 “I felt very high fashion and glam and special. It was really, really cool…I didn’t really know what to expect, but it hit the stereotype of what I thought it would be,” McKeen said. “Everyone looks like a freaking supermodel and there’s cameras everywhere.”

During her two-day trip, she posted on Snapchat and Instagram stories in real-time and plans to create a full-length YouTube video detailing her fashion week experience.

However, not everyone is as enthusiastic.

“Outside of this bubble no one cares really,” said Ashlee Glazer, a go-to makeup artist for fashion and beauty insiders. “The average person cares more about Joanna Gaines’ eyeliner than the crazy stuff that we see on the runway.” (Joanna Gaines stars on the HGTV show “Fixer Upper” with husband Chip Gaines, and has helped popularise a $3 Revlon eyeliner.)

Glazer, 33, said the bulk of her clients are the guests who attend shows and the corresponding parties during Fashion Week. She’s also popular on the bridal circuit and has made up over 500 brides for their big day. Glazer said just one bride, a fashion publicist, has ever shown her a photo from fashion week as beauty inspiration.

But for fashion brands, sponsorship from beauty companies is still critical; it offsets a meaningful part of the show budget.

“The best part of my show budgets was the $40,000 from MAC,” said a fashion publicist who requested anonymity.

This individual, who oversaw fashion week planning at a luxury fashion house, said it didn’t matter what brand sponsored the fashion show, prestige or mass – it was the artist affiliated with the brand that was the draw. They said that the brand worked with Revlon numerous times solely because of Westman’s affiliation – and Revlon footed the bill.

“The brands who do it well have artists that people are excited to work with,” this person added. “The designers care what key artist they get – and the budget piece. They don’t care about the ‘brand.’”

Another publicist said content became a bigger part of negotiations as social media gained critical mass. Bartering with beauty companies over the amount of press and photographers allowed backstage reflected sponsorship fees: the more content the beauty brand wanted the more money the designer could ask for.

For Westman, it’s the second season she’s using her own collection backstage, and she’s not paying for the placement. Nor is she getting paid for her services or product, which is okay for Westman so long as the “Westman Atelier” brand gets printed on the show bill as the designer’s official makeup partner.

The same goes for McKnight, a fashion week veteran who has been doing hair at fashion week for over 40 years. He, too, is having to learn new tricks now that he has a haircare line of his own, Hair by Sam McKnight. The stylist debuted his brand at Michael Halpern’s two years ago and uses fashion week as a platform to release new products.

“There’s no point to launch in a magazine anymore. When I say launch – they [products] kind of just appear. It’s not some big champagne reception. It’s, ‘Here they are, here’s what we’re using’ and we let it go from there,” McKnight said of the instantaneous dissemination of backstage content, which wasn’t as paramount before the stylist had his own line to sell.

“We’re still doing the same thing, but how it’s changed for me with a brand is that it’s out there two minutes later,” said McKnight.

McKnight uses social media to let it “seep in,” both on his personal Instagram and the Hair by Sam McKnight account. He said it’s mutually beneficial: he gets the word out and is able to help young, independent designers in the process.

This newfound freedom does involve tradeoffs.

“I’m really into where I am now,” Westman added. “I don’t have to pretend that I’m only using one thing. The difference is that I just don’t make any money now at shows.”

Has Backstage Beauty Lost its Gloss

The Fenty Effect Comes to Skincare