NEW YORK, United States — President Donald Trump’s controversial term has proven to be a subscription boon for many of the nation’s largest newspapers, including the Wall Street Journal, whose parent company Dow Jones saw a 10 percent increase in circulation revenue in the most recent fiscal quarter ending June 30.

But across the newspaper industry, advertising revenue is still declining rapidly, decreasing a total of 10 percent in 2016, according to Pew Research Center. In the fiscal year ending June 30, Dow Jones parent company News Corp saw advertising revenues decline 7 percent to $2.61 billion in its news and information services division. The Wall Street Journal is currently implementing a streamlining plan that will see savings of $100 million by the end of fiscal 2018.

Newspaper magazine supplements, however, are still a bright spot in the industry. When the WSJ Weekend Edition is released on August 26, available on newsstands and sent to approximately 1 million print subscribers, it will contain the WSJ. Magazine’s biggest issue yet. Ad pages are up 5 percent year-over-year to 110 pages, according to publisher Anthony Cenname. Revenue is up 5 percent, too. 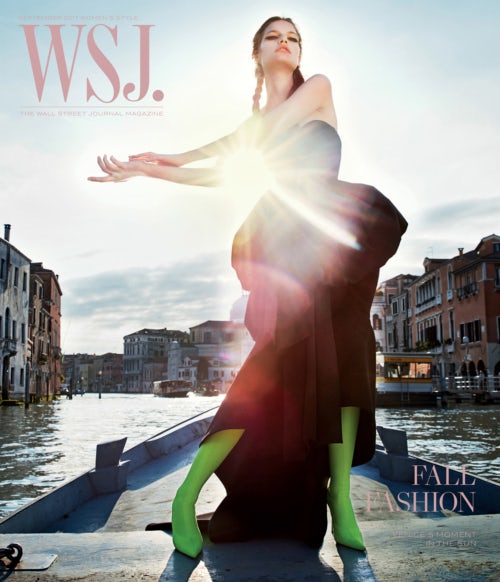 “It is a true testament to the power of print, and that print is not dead,” says WSJ. Magazine editor-in-chief Kristina O’Neill, who marks five years at the title in October.

“It's not just a magazine supplement anymore, it’s becoming a big powerhouse,” adds Cenname, who attributed the page gains to the fashion sector, “despite the challenged luxury marketplace.” Prada, Hermes, Balenciaga, Burberry and Michael Kors all expanded their page units, while other brands such as Carolina Herrera returned after an advertising hiatus.

“Many fashion titles are now competing with social media from an aspiration standpoint,” says Cenname. “[Our readers] tend to be those that are actually shopping within the retail environments right now, as well as online. They have multiple homes, they have lots of money… We reach that audience of that top one percent in a way that is laid back, but at the same time part of the relevancy of our trusted journalism in the field.” According to CNN, 79 percent of WSJ subscribers are male, 88 percent are above the age of 50 and 70 percent make over $100,000 a year.

“The way that we cover fashion is in the context of lifestyle, not the other way around,” says O’Neill, citing art, tech, travel, music and fashion as the key areas of interest for the WSJ. Magazine audience.

“The idea that we are sort of unpredictable in our approach is something that our readers have come to appreciate,” saysO’Neill. Recent covers have featured Cuba, director Sophia Coppola and Apple chief design office Jony Ive — the latter of which has been the top performing magazine story of the summer online.

Another revenue opportunity on the horizon is the magazine’s first ever conference, D.Luxe, which will premiere on the third day of WSJ D.Live, the newspaper’s invitation-only tech conference in Laguna Beach in October. “Live journalism is something that a lot of brands are thinking about,” says O’Neill. “There’s a tremendous hook to it beyond just being a luxury conference,” says Cenname. “It’s something that people will come out and learn from, as many of these companies are looking to become technology companies in their own right.”

O’Neill and Cenname hope the D.Luxe conference will become a significant brand pillar alongside the annual Innovator Awards, which honoured The Weeknd, Melinda Gates, Tom Ford, Ai Weiwei and others last October. “It’s a brand in and of itself… and it showcases the intersectionality of what we do,” says O’Neill. And, in an unusually politicised era, the event further differentiates the magazine from the breaking news priorities of the Wall Street Journal, which has been criticised for being too soft in its coverage of the president.

“I leave the politics to the paper,” says O’Neill. “Because the newspaper is obviously so steeped in that world, we are able to be an antidote to that."