Brands and retailers are targeting mid-priced formalwear in the hopes of capturing consumers who shudder at the cost of a high-end gown but want something more unique than fast fashion.

Brands and retailers are targeting mid-priced formalwear in the hopes of capturing consumers who shudder at the cost of a high-end gown but want something more unique than fast fashion.

NEW YORK, United States — On a recent visit to Alexander Wang’s newly refreshed showroom, the designer had plenty to talk about. There was a specially sectioned-off area featuring his extensive range of handbags, shoes and other accessories, as well as racks-upon-racks of his still-under-wraps Resort collection, set to debut during his September 2016 runway show. But nothing could upstage one of Wang’s perennial workhorses: a $1,150 floor-length gown with suspended fish line framing the bodice.

The dress has been his top-selling piece, at both direct retail and wholesale, for two seasons in a row. “People don’t necessarily know me for evening,” Wang said. “That’s a category that we’re really building upon.” 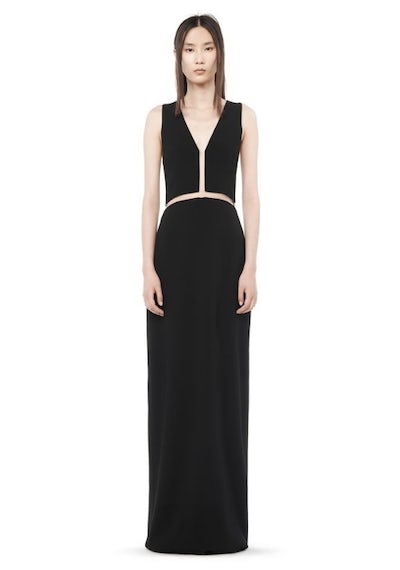 Indeed, Wang’s expanding eveningwear line reflects the growth of formal and cocktail dresses that fill the gap between $3,000-plus creations and fast-fashion throwaways. “For the girl who is getting married who doesn’t have $20,000 to spend or the girl who is going to prom and doesn’t want to wear [a knockoff], what’s the in-between?” Wang asked. “Especially if you want something sexier, or a bit more daring.”

It’s the logic on which the London-based label Galvan was launched in 2014. The collection, which sits on the designer floor at retailers like Bergdorf Goodman and Neiman Marcus and online at Matchesfashion.com, is manufactured at five factories in the greater London area, with most pieces priced well under $2,000. For instance, the brand’s best-selling corseted jumpsuit — a growing subcategory within eveningwear — retails for just over $1,300 and is rarely discounted.

“The concept behind Galvan is twofold,” explained chief executive Katherine Holmgren. “We wanted to create eveningwear that is clean, modern and cool, that felt quite fresh. So much of what you find is very formal and embellished.” What’s more, “There are beautiful dresses [available], but not at a price point that is accessible for most women,” she continued. “The modern woman wants things that are good value. The price was really important to us, so we keep costs down by keeping things simple.”

The Galvan team, which will open its own e-commerce shop in July 2016, spent a year developing the concept before launch, and received plenty of feedback from retailers beforehand. “Neiman Marcus, Bergdorf Goodman, Matches, Holt Renfrew — all of them were immediately so excited,” Holmgren said. “We launched our first season with 22 big retailers on board. I think it was largely because we were filling this gap in the market.”

The middle market for eveningwear is certainly still in a nascent stage. In fact, in the US, only 13.5 percent of evening gowns are priced between $600 and $1,200, while 69 percent are priced under $600 and 17.5 percent are over $1,200, according to fashion data firm Edited. The success of even more accessible brands, like Reformation — whose sexy $300-and-under tea dresses are summer wedding favorites — and Self Portrait, whose founder built a business off of its $480 “Azaelea” lace dress, are a testament to the power of affordability. But as the contemporary market continues to contract thanks to the breakdown of the wholesale model, brands operating in the space are finding new opportunities in eveningwear.

Consider Sachin and Babi Ahluwalia, who launched the contemporary line Sachin & Babi in 2009. In September 2015, the designers moved out of daywear to focus entirely on evening and cocktail attire. Under the umbrella of another business, the Ahluwalias have long hand-embroidered textiles for upscale fashion houses like Oscar de la Renta, Carolina Herrera and Jean Paul Gaultier. They found that retailers were most interested in garments that utilised those skills. “We used to present 110, 120 SKUs to department stores, with 40 or 45 percent in the occasion category,” Babi Ahluwalia explained. “They gravitated towards occasion more and more. At the same time, the contemporary market was rough, because of margin agreements, buybacks, Zara, Uniqlo, H&M. And athleticwear! Today, people buy expensive yoga pants.”

As occasionwear was a bright spot in the market, “We figured, why don’t we focus on that niche?” Ahluwalia continued. Today, the label is stocked at Neiman Marcus, Saks Fifth Avenue, Nordstrom, Moda Operandi and Harvey Nichols, as well as dozens of specialty stores, with prices hovering in the $650 to $1,350 range. In the late autumn of 2015, the designers opened a retail store on the Upper East Side of New York, catering to the neighborhood’s socialite scene, but also to teenagers buying gowns for prom.

To be sure, many of Sachin & Babi’s retail clients can afford to pay more than what their gowns cost. But that’s not the point. “When a lady is putting together her own table at a charity event, then she’s willing to spend $5,000. But when she’s going to one of her friend’s charity galas, she can buy something from us and it’s really not going to trouble her that much,” Ahluwalia said. Social media impacts the choice, too. “After it’s been photographed a couple of times, you have to retire the piece. Instead, she can buy my dress and feel great.” The success of their pivot to a formalwear-only strategy inspired the Ahluwalias to launch bridal in April 2016.

While the approach might not work for every brand, the demand for accessible-but-not-cheap cocktail and eveningwear speaks to current consumer values. Fast fashion might be good enough for everyday, but shopping for special-occasion items tends to be a more emotional experience. “It’s definitely an underserved category,” said Diane Von Furstenberg chief executive Paolo Riva. “I’ve seen a big shift toward more freedom and flexibility on how women approach cocktail and evening. Women are more confident, and they’re willing to try different brands and price points.”

Right now, cocktail and eveningwear dresses and jumpsuits make up 20 percent of DvF’s overall offering. For Riva — whose new chief creative officer, Jonathan Saunders, will present his first collection in September — the challenge is to make something that is as distinctive as what is offered at the high end.

“We all love Valentino gowns. They are masterpieces, and they have a certain price because they are incredible. That belongs to them. We have to do something that is unique to us,” he said. The key, he added, is to not overproduce. “These styles have to have a sense of uniqueness. There has to be a scarcity there.”