Beyond the Crocodile: Lacoste’s Next Chapter

Beyond the Crocodile: Lacoste’s Next Chapter

PARIS, France — It’s almost impossible to think of Lacoste without picturing a green crocodile emblem, often attached to the left breast of a piqué polo shirt.

But the 86-year-old sportswear brand, founded by French tennis player René Lacoste, has big ambitions beyond its signature shirt, which remains a key business driver even today and often evokes connotations of middle-class men playing tennis or golf.

Now, the brand is doubling down on its fashion aesthetic and sports roots to become better known as a true lifestyle brand. Recent hire Louise Trotter, the Joseph veteran Lacoste tapped to lead its creative direction last year, is an important piece of this puzzle.

The Sunderland-born designer, who will show her debut collection for the house on Tuesday, joins the label at a pivotal time. Lacoste, owned by Swiss holding group Maus Frères, is a multi-billion-dollar global brand with a strong European heritage and a reputation for producing exactly the sort of stylish sportswear that’s currently in the fashion zeitgeist. The challenge is to convince consumers — particularly younger ones — that Lacoste apparel beyond polos, as well as sneakers and bags, are covetable fashion items. Trotter’s appointment, it's hoped, will help boost the ready-to-wear and accessories portions of the business, which are currently very small.

Louise is the pillar of the development of the brand. She will be part of the discussion of what the brand will stand for.

The wider sportswear space is growing at the moment. According to Euromonitor, the global market was worth $201 billion last year, up from $168 billion in 2015. Growth is forecast to accelerate, increasing 7 percent this year. This is good news for Lacoste, as well as competitors like Ralph Lauren and Fred Perry.

But there’s a growing fatigue around athleisure in fashion, especially as brands that are rooted in formalwear have struggled to adapt to the sportswear phenomenon, said Florence Allday, fashion and beauty analyst at Euromonitor.

“Formal sportswear has not quite been cracked yet — not for lack of trying,” said Allday. “As we see more and more formalwear, particularly among women’s dresses and men’s suits, on the catwalk, it would be interesting to see Trotter attempt to coin a ‘look’ that would ensure Lacoste’s longevity in the confusing world of luxury athleisure.”

Guibert, who took the helm in 2015, has already made changes to revitalise the brand, which four years ago was suffering from waning appeal, its crocodile logo seen as overexposed. “The awareness of the brand was great around the world, but the desirability of the brand was quite different depending on the market,” he said.

Guibert cut the number of wholesale clients and bought back licenses for footwear and leather goods. Today, wholesale accounts for 40 percent of the business, down from 60 percent in 2015. Guibert wants to shrink that share to 30 percent eventually. 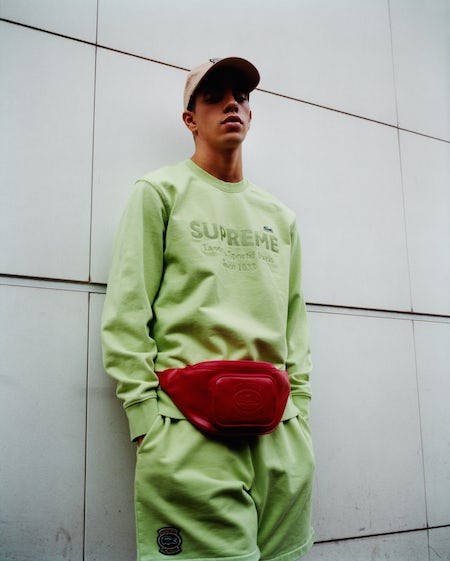 Reducing reliance on polos by strengthening its footwear and accessories offerings was a priority, as was reaching younger consumers through social media and brand collaborations with the likes of Supreme, Agi & Sam and Yazbukey. E-commerce has also grown to 13 percent of global revenue, up from 2 to 3 percent in 2015.

At the same time, Lacoste stepped up sponsorship deals that played on the brand’s French heritage, including the French Olympic team and the French Open. Lacoste also inked a sponsorship deal with Novak Djokovic, whom it lured away from Uniqlo in 2017.

The brand also succeeded in reaching a younger demographic. It currently appeals most to “millennials and Gen-Z who are looking for retro with a modern twist,” said Matt Powell, NPD Group's sports industry analyst.

Still, fashion beyond the polo shirt is still a small part of the overall Lacoste business. Leather goods makes up just 6 percent of sales, while its contemporary line Lacoste Live, which launched in 2011, is roughly between 5 and 7 percent of sales. Lacoste’s catwalk collection is a tiny sliver of the business, its role for many years being “more something that should inspire the global collection,” said Guibert.

The truth is Lacoste hasn’t yet honed is its women’s fashion offering, which Guibert says will be “a big opportunity to catch a different kind of business” and “improve the global brand around the world.”

From this perspective, it’s no surprise that Trotter, with her knack for creating upscale, fashion-forward yet still commercial basics, was tapped as the creative director following Felipe Oliveira Baptista’s departure last May. During her tenure at Joseph from 2009 and 2018, the multi-brand retailer’s namesake label became the core of the business, accounting for 87 percent of the company’s global sales in 2015.

Her vision for Lacoste includes ramping up the brand’s accessories line. Using technical fabrics to create practical garments is also on the agenda. But rather than consciously playing to market trends, Trotter intends to zero in on the core Lacoste DNA, “French elegance mixed with sportswear,” modernising the house codes to tap into to what consumers want today. Logomania is not part of her vocabulary.

“I’ve purposely built everything, except for the really obvious things, without crocodiles, because I want to get the product really right,” she said. “Then the crocodile is the cherry. It’s the last thing I want to put on the garment.” Where she does plan on exploiting the popular appeal of the brand’s mascot is with accessories, a product vertical she says can be more playful.

Lacoste is beyond being cool. I’ve not tried to think about if it's street or if it's bourgeois.

Lacoste also has its eyes on Asia. Korea is currently a strong market for Lacoste, Guibert said, but he points to China and Japan as countries where there’s more room to grow.

Mario Ortelli, managing partner at Ortelli&Co, said Lacoste is moving in the right direction, but adds that they’re not the only ones in the market. “It is important to note that the competition in sportswear is particularly strong given that many brands have increased their focus on this attractive segment, especially in emerging markets,” he said.

Only time will tell whether Lacoste can remain relevant in a crowded landscape. But to Trotter, relevance isn’t about a brand’s cool factor. It’s about having a strong brand cachet. It’s a subtle distinction, but an important one to consider for future-proofing a brand.

“I think Lacoste is beyond being cool,” she said. “I’ve not tried to think about if it's street or if it's bourgeois, I’m not thinking about stereotypes. I’m thinking about the lifestyle and how people really wear Lacoste today. If anything, I want to make it more desirable.”