MUMBAI, India — In a blink-and-miss-it moment at the recent launch of Kourtney Kardashian’s wellness website Poosh, a small but significant connection to Mahatma Gandhi went largely unnoticed.  An iconic Indian textile emblematic of Gandhi’s struggle against colonial rule made a guest appearance on the site dedicated to “Kourt’s Morning Rituals” that features more than a few scantily-clad photos of the reality TV star.

Kardashian’s Eve Lom wash cloths are made from muslin sourced from India, a must-have facial cleansing product for advocates of the clean beauty movement.  But what her team probably didn’t realise is that muslin is also known as khadi, the hand spun, hand woven cloth at the heart of Gandhi’s struggle for independence and a politically infused symbol of Indian-ness.

“[Well, I suppose] that khadi and Kardashian do both begin with a ‘K’,” Gupta adds, with tongue firmly in cheek.

What Gandhi himself would have made of this iconic textile appearing on a site whose mantra advises that “living a healthy life doesn’t mean you must forgo a sexy pair of stilettos” is anyone’s guess.  But in the century that has passed since Ghandi’s time, khadi has come to have many different meanings.  While global brands as diverse as Levi’s, Anthropologie and Issey Miyake, regularly use it for its earthy and spiritual image, the textile still suffers from an image problem in other quarters.

“Khadi has been stereotyped as coarse and dowdy fashion. We need a new visual vocabulary, so maybe a Kardashian using khadi isn’t such a bad thing,” Gupta adds.

In connecting society, clothing and personal identity with political decision making, Gandhi’s vision of khadi was a forerunner of today’s ethical fashion movement.

“Khadi was the fabric of freedom,” says Anaita Shroff Adajania, Fashion Director of Vogue India.  “So, there will always be a sense of pride when wearing or working with the fabric. But the revival we are seeing today is a departure from the coarse, thick khadi of 1947 (India’s independence).”

Indeed, Khadi comes in many weights, coarse and heavy or light and airy; what defines it is how it is made, spun and woven by-hand. Whether used to refer to clean beauty products or contemporary fashion, khadi is laced with associations of sustainability, spirituality and wellness, something discussed by BoF founder Imran Amed in a podcast with spiritual leader Sadhguru Jaggi Vasudev.

Khadi forms a core element in aesthetics — and therefore, to some extent, the business plans — of brands like Paris-based Khadi & co., Los Angeles-based Dosa, or cult concept store Egg in London’s Knightsbridge. All present khadi as loose flowing, handwoven, pure and earthy simplicity. Egg was co-founded by Asha Sarabhai, who was encouraged to develop her khadi-based designs in the 1980s when Issey Miyake gave Sarabhai’s khadi garments space in his Japanese stores.

Makiko Minagawa, who discovered khadi in 1983 while designing textiles for Miyake and now heads her own label Haat says, “khadi is super-fine, like a covering of mist; it’s an ultra-lightweight, see-through cotton. It’s extremely rare to see something this simple and beautiful.” 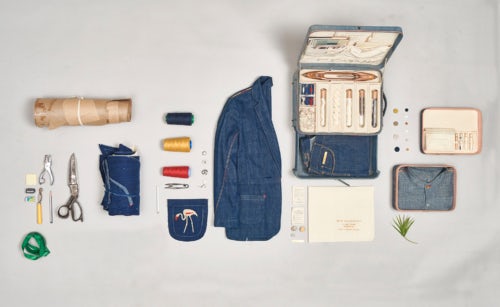 Brands like these are evidence of khadi’s global reach courtesy of Indophile textile designers. Given khadi’s homespun image it may come as a surprise then, that in India, khadi has also been co-opted as a brand name and is now worth hundreds of millions of dollars in annual sales.

The government-run KVIC (Khadi and Village Industries Commission) set-up in 1954, now employs millions of producers with over 7000 stores and outlets across India. The KVIC’s Khadi label appears on everything from hand or mill spun fabrics, indigenous honey and herbal soaps.

Meanwhile, the KVIC has signed MoUs with several large Indian retailers.  In its 2019 annual report, men’s tailoring behemoth Raymond claimed that its khadi collaboration with the KVIC has led to the retailer generating 3 million man-hours of employment at 30 percent higher wages for the weaving community.

Although Gandhi’s khadi implied hand-spun yarn and hand-woven cloth, the large economies of scale required for employment generation has seen progressive mechanisation of spinning, raising the question of whether the textile really does remain hand-made.

“Simple devices to improve the ease of handling the spinning mechanism can go a long way in improving productivity,” says Radharaman Kothandaraman, a leading textile designer and founder of The House of Angadi, the sari brand that Bollywood star Deepika Padukone wore for her wedding to Ranveer Singh.

Today, khadi’s powerful symbolism as the “fabric of freedom” has taken on new resonance as a form of “home-grown luxury” in the context of India’s growing economic power. The Fashion Design Council of India (FDCI) has collaborated with the KVIC in spectacles where designers like Rohit Bal transform khadi into elaborate designer wear, modelled by stars including Sonam Kapoor and Salman Khan.

Kothandaraman explains: “In the Gandhian era — Khadi was considered a fabric that projected austerity and simplicity and was seen as the common man’s fabric. Today it is [also] perceived as aspirational, and is definitely a high-end fabric consumed largely by an elite audience that places a premium on handmade products.”

‘Luxury khadi’ has found a champion in top designers like Sabyasachi Mukherjee, who once told The Indian Express that through khadi, he wants “…to extend good taste to the rich”. A Sabyasachi embroidered khadi bridal ensemble can sell for upwards of US $5000.

Between nostalgia for a simpler socialist past and hopes that the textile could help weavers share in India’s shining capitalist future, the very idea of khadi remains hugely emotive in India, with cinema and popular culture often using it to emphasise patriotism and Indian identity.

In the hit film comedy Lage Raho Munna Bhai (2006), veteran Bollywood actor Sanjay Dutt plays Munna, a small-time bhai (gangster) who starts to see apparitions of Gandhi and converse on Gandhian philosophy. Munna becomes a reformed character, wearing khadi, and helping the community he formerly terrorized, to fight a corrupt real estate developer trying to swindle a children’s orphanage out of their property in a prime location. Time and again in popular culture khadi evokes feelings of intimate connectedness, authenticity and simpler values from a pre-globalisation era.

It is these persuasive values that attrac many Indian conglomerates to bet big on khadi, drawing on its associations with eco-fashion, artisans and wellness.

Big business from a humble textile

Indian retail conglomerates including Arvind, Aditya Birla and Raymond look to khadi as an opportunity – in theory, at least – to merge sustainability and commerce. They also bring the design and technical innovation required to optimise khadi for contemporary fashion markets.

How to do this in a modern relevant way is a constant challenge, says Himanshu Shani, co-founder along with Mia Morikawa of design consultancy CellDSGN, the parent company of cult sustainable clothing brand 11:11/eleven eleven of which Shani and Morkawa are the creative directors.

“Khadi is something that needs to transcend fashion, one day you buy 10,000 metres of fabric then the next day you’re done.  [But] what happens to the weaver?” 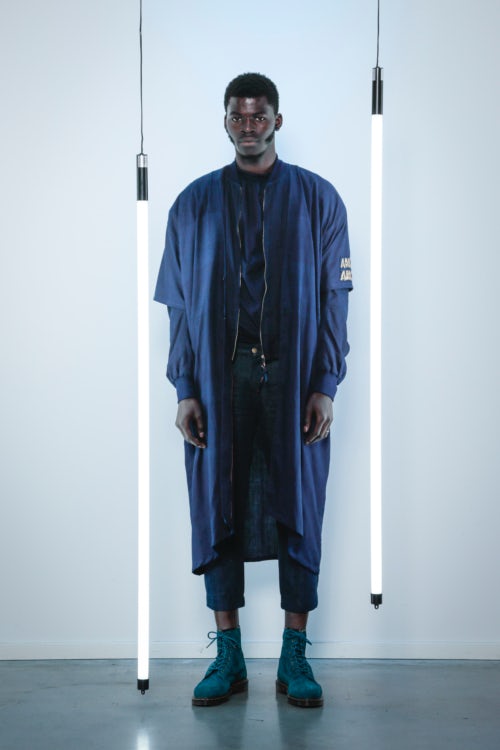 Innovation is key: Cell DSGN have collaborated with textile and retail giant Arvind on the development of khadi denim. Arvind has spent ten years on R&D bringing together an iconic American textile and Indian khadi to tap the premium sustainable denim market, selling an average of 12,000 metres annually over the past five years.

“Arvind works with the KVIC and our R&D teams have travelled into the rural countryside to learn about the on-the-ground realities for village-based artisanal communities. The economies of scale are very different from mill production, a single weaver can only weave four metres of khadi daily,” explains Punit Lalbhai, Executive Director of Arvind Ltd.

The romantic idea of khadi as a form of electricity-free slow fashion also chimes with global concerns around climate change.

But rather than work with the KVIC’s vast infrastructure, some designers prefer to develop their own hand spun and woven textiles. Gaurav Jai Gupta, who with his label Akaaro pushes the envelope by restructuring the weave of textiles, is wary of even using the term khadi.

“Khadi is only a small part of a much larger Gandhian idea, we need to assess what we’re really adding. The whole idea of khadi is in the soul of making.”

Indeed, in all of the hype around khadi, a question persists: how khadi can shift past its current niche in the market and indeed if it should? The KVIC mantra is one of scale, and the corporate narrative is one of adding value, but how can brands balance scale and innovation with the essential ethos underpinning khadi, before it becomes something else altogether?

Having previously worked with Arvind, 11:11/eleven eleven now produces their own iteration of khadi denim, with short staple and indigenous cotton known as kala. With jeans or jackets priced at around $600 they sell around 200 units annually with Japan as their main export market.

“We use cotton from rain-fed crops grown in Gujurat, it’s short staple, requires no irrigation, there’s no bio-tech used. It’s the best thing to put next to your skin,” Shani claims. 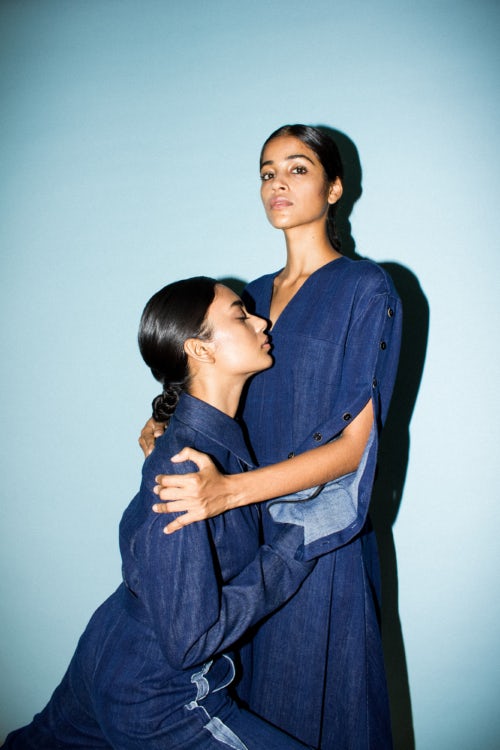 Along with young Indian labels including Akaaro, Pero and Rahul Mishra, 11:11/eleven eleven have also taken part in a design initiatie launched as part of rebuilding khadi weaver's livelihoods in the wake of 2018's devastating floods in Kerala. Says Save the Loom founder Ramesh Menon,

"The majority of these khadi weavers are women, widows or the sole earning member in their family, and it was extremely crucial for us to work on a revival plan to bring them back to the craft to stop the wage loss and also make them hold n to the work they have been practicing for decades."

It's a sobering reminder of how important khadi remains. Ultimately, khadi isn't in need of 'rescure or 'saving', but it does require understanding of its relevance for markets today. This is where design has a key role to play in bringing khadi to broader attention.

Ruchika Sachdeva of Bodice, who won the International Woolmark prize for womenswear in 2018 says she plans to use a blend of khadi and silk for her next collection to be presented at Paris fashion week for SS/20.

“I’m working with two weights, one very light and another similar to a cotton poplin. Khadi’s not just a textile but a visual metaphor for India. But I want to add a certain angle, and take it to another level.”

Pushing khadi to another level, whether through denim, wellness products or elevated classics, the business case for this iconic textile is strong. Not least, the historical symbolism of khadi provokes new ways of understanding textiles as a powerful moral vector of society that can also be used to turn a profit.

If this isn’t food for thought for today’s fashion players, then nothing is.

Dr Phyllida Jay is the author of Fashion India.