Introducing the Calgary bag and Crowdsourcing Experiment with Bill Amberg

The making of the CALGARY by Bill Amberg for BoF | Source: Crane.tv

– At the beginning of last year while roaming around the gargantuan labyrinth-like Florentine trade fair that is Pitti Uomo, I had the pleasure of meeting Bill Amberg for the first time. One of the UK’s most respected leather goods craftsmen, for some time Bill had a small shop around the corner from where I live in London. Over the years, I would pop into his store to have a look at the beautiful leather products and, once in awhile, splurge on a piece for myself or a gift for a friend.

So when CNN coincidentally contacted me later that same day in Florence to ask about my favourite luxury brands in 2010, Bill Amberg was already top of mind, and at the top of my list. A couple of weeks later, we filmed a segment for CNN in his shop, which has since moved to London’s Burlington Arcade, and I listened to Bill talk eloquently about his favourite products, which is something like listening to a storyteller speak about their favourite characters; each has its own personality and history. If I was a big Bill Amberg fan before that day, now I was a true convert to his way of preserving traditional English leather goods craftsmanship, while creating great products suited to the realities of modern life.

Then, after the interview was over, Bill spontaneously popped the question: “How would you like to co-design a bag with me?” he asked. Surprised and admittedly a bit excited by the chance to work side-by-side with someone Vanessa Friedman recently called a “leathergoods czar," I immediately said yes, before he could change his mind.

So, it is with great pleasure today that we unveil the CALGARY bag by Bill Amberg for The Business of Fashion. 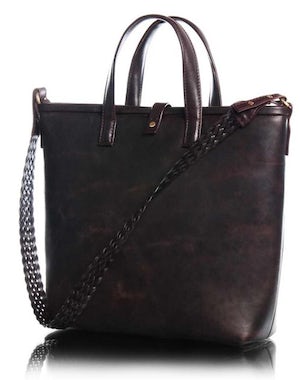 It has been more than a year in the making and I have met with Bill several times over the past 12 months to fine tune what was originally intended to be a small project, but has organically grown into something more interesting, substantial, and very BoF.

Now let’s make something clear. I did not design this bag, nor did I really "co-design" this bag. I am no designer, nor do I fancy myself one. Rather, what I did was give Bill an idea of my day-to-day life, around which to design the bag – a life that's not so different from that of many urban professionals around the world, who are always on the go, have long days that start at the gym and end at a late dinner with friends, and carry technology and gadgets around with them that need to be protected from being dropped or bumped. Basically, Bill was getting input from a loyal consumer, and that consumer happened to be me. 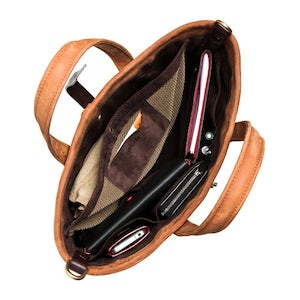 I went to our first meeting with a long list of functional and aesthetic requests for what I thought would be the perfect urban bag. But I quickly learned my first lesson. Good design is about compromise, and no matter how hard I pushed (and push I did!) Bill made it clear that all my requests could not be met. In order to achieve that right balance between fashion and function, some concessions would have to be made.

Then one fine day in July, I spent the afternoon in Bill’s studio and watched as Damian, one of Bill’s finest craftsman, made the first prototype. I road-tested the CALGARY for a couple of weeks, taking it to meetings and showing it to a few friends, fashion designers, and a couple of very experienced fashion editors to gather some additional feedback, which proved to be extremely helpful. Again, I went back to Bill with yet another list of requests.

After a bit of back and forth, the CALGARY took shape: a unisex, tote-style bag, simple and elegant on the outside, functional on the inside, designed to fit the lifestyle of the busy modern gentleman or gentlewoman. The bag is entirely padded with neoprene to protect technology, is lined with suede inside, and includes specially designed pockets for iPads, Blackberries, and iPhones. 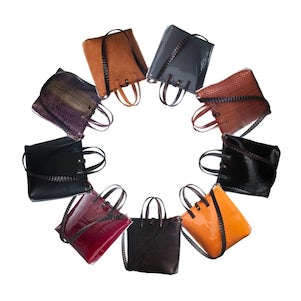 Then came the real kicker. Bill liked the silhouette of the bag so much, he suggested we make them in more than one material and colour, possibly up to nine different versions. But the question quickly became: How many should we produce? And in which colours? We had arrived at the typical quandary that so many fashion merchandisers have faced over the years: trying to predict consumer demand before launching a new product.

This got me to thinking. With all of this talk about fashion crowdsourcing and the potential benefits of integrating input from consumers into important merchandising decisions, why not conduct our own little crowdsourcing experiment? It would be a great way to learn first-hand about how effective these new feedback mechanisms can be in predicting consumer demand, bringing a little bit of science to what, until recently, has been mostly a fine art, based on the gut instincts of some very talented merchants, informed by a little bit of past sales data – not the most reliable indicator in a forward looking, trend-driven business like fashion. Plus, then we’d know exactly what to produce, lessening the risk of unloved CALGARY bags sitting around in the dark in a Bill Amberg warehouse somewhere.

So, here’s how the experiment is going to work – and for those of you who participate and give us your feedback, there is one CALGARY bag up for grabs which will be given to a person selected at random from amongst the names of those people who have responded to our survey. 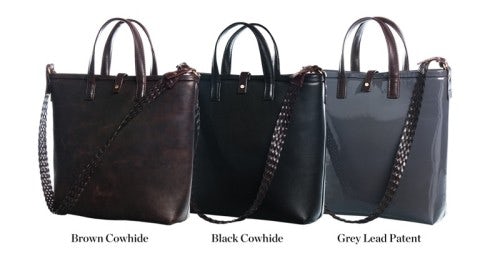 We propose three bags, in three different colours. We’d love to hear what you think about these colours and, if you were to buy one, which one you would buy. We'll discuss this feedback with Bill Amberg and decide which bags to produce, and in what quantities. And of course, we’ll share all the results with the BoF community in a few weeks and let you know what we’ve learned, based on our little impromptu experiment, about the potential of crowdsourcing. Let us know what you think!

For those who are interested, there are six limited edition CALGARY bags available for sale right away at www.billamberg.com

Thanks to our friends at Crane.tv for working with us to produce this behind-the-scenes video on the making of the CALGARY bag

UPDATE, 19 September 2011 : The crowdsourcing survey is now closed and the results have been posted here