LONDON, United Kingdom — BoF can exclusively reveal that Aitor Throup has been appointed as a creative consultant at Dutch denim label G-Star Raw. The artist and designer —know for his fascination with anatomy, his focus on functionality and a construction process which utilises his own sculptures of the human body as a system for blocking garments — will work with the company on a range of special projects encompassing product design, store design, and marketing and communications, “with the ultimate aim of globally aligning G-Star’s continuing ethos of denim innovation,” said an official statement. Throup was also the creative direction of Damon Albarn’s first solo album Everyday Robots. He studied at the Royal College of Art, where his acclaimed graduate collection was entitled “When Football Hooligans Become Hindu Gods.”

“We have long admired Throup’s work as a designer. The collaboration between G-Star and Aitor Throup is a natural fit as we share a design ethos that is rooted in innovation and identified by 3D construction. Many of his object creations hit a chord with G-Star's DNA, roots and design philosophy,” said Thecla Schaeffer, chief marketing officer of G-Star Raw, which specialises in unwashed and untreated denim.

“G-Star [first] approached me about three years ago. They presented their history and a lot of things that I was unaware of, which took me by surprise. I started seeing all of these examples of really beautiful product design; distilled yet modernised versions of Jean Prouvé furniture, Canondale bikes, a Land Rover Defender, a Leica camera. G-Star have this approach that is so consistent and so product focused,” said Throup.

The designer intends to bolster G-Star’s communications by “focusing on the unique ability and product of the brand, and helping them define unique ways to put that across, which goes above and beyond pure product design. It is about how denim innovation and this product integrity, which in recent times hasn’t always been that apparent, should be brought to the surface through [store] environments, marketing and advertising campaigns.” In one of his first projects for the brand, Throup has art directed G-Star Raw’s Spring/Summer 2014 brand campaign starring Magnus Carlsen and Lily Cole. 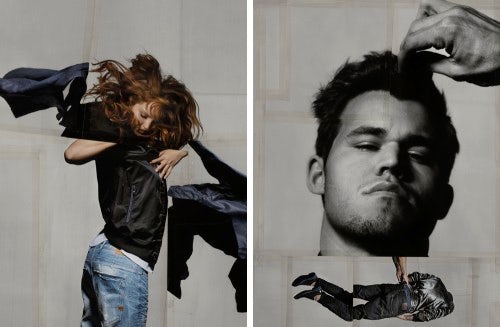 Throup’s cerebral approach is also already evident at the brand’s new concept store in London’s Oxford Street, a minimalist, gallery-like space launched in December 2013 and realised in collaboration with Hungarian concrete design studio and factory Ivanka. “We worked with really high-level architects and G-Star were open enough to take on board completely new thinking and new interpretations of what retail could be. We elevated the stock room into this almost suspended, beautiful glass mezzanine feature. It is a direct metaphor for the transparency of the brand. We don’t mind showing you the stock room, we have nothing to hide. That in itself reflects the ethos of the brand, this raw approach to everything.”

“This is what I love doing, creating the vernacular for whatever message I am conveying. I have always considered the space and the way things are presented,” continued Throup. “The spectrum for my creativity hasn’t changed; it is just the reach and the level of the implementation. I can’t imagine presenting a collection or a project without it being a multi-dimensional sensory experience, and creating a world for the work to inhabit. This is effectively that, times a thousand.”

Aitor Throup will discuss his unique take on fashion with Tim Blanks, fashion critic and editor-at-large of Style.com, at the London Design Museum on Wednesday 30 April 2014 at 7.30pm.