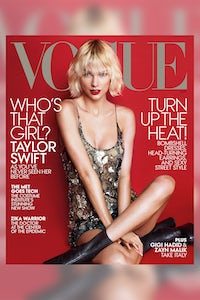 NEW YORK, United States — A corner-clipped, first-bound copy of the May 2016 issue of American Vogue sits on a coffee table in the One World Trade Center office of Susan Plagemann, the magazine’s publisher and chief revenue officer. It’s new oversized look, visible at first glance, is just one of the changes coming to the print edition of the storied magazine as part of a wider strategy to evolve one of Condé Nast’s premier titles for a changed media environment, which has, in recent years, put pressure on legacy magazine publishers.

The new issue, which has a larger trim size (9 inches by 10 7/8 inches, up from 8 inches by 10 7/8 inches in April) as well as heavier paper stock on the table of contents and the introduction to the features well, designed to make the magazine feel more luxurious and easy to navigate, will retail for $6.99 — one dollar above Vogue’s current newsstand price of $5.99.

The new look is not permanent. At least not yet. But it will reappear when Vogue’s Met Gala special edition hits newsstands a week after the May 2 event and, perhaps more importantly, for the magazine’s annual September Issue, which will have a newsstand price of $9.99, an unusually high figure for a mass publication. Changing things up for May instead of March — traditionally the second biggest issue of the year — was a decision born from practical necessity as much as strategy. For one, the publication’s first news app is still being tweaked and slated to launch in late April to coincide roughly with the revamped print product. For another, May is the month of the Met Ball, an annual fundraising gala for the Metropolitan Museum of Art's Costume Institute, which Vogue editor Anna Wintour has transformed into a heavily mediatised and highly lucrative spectacle that rivals the Oscars for its red carpet wattage and raises millions of dollars for the museum. “May is not our bathing suit issue. It’s tied to the largest cultural institution in the United States,” Plagemann says. “It’s an extraordinary exhibit of what Vogue has done for so long, and that is use culture as a lens of what’s happening the world.”

“Manus x Machina: Fashion in an Age of Technology,” which is being sponsored by Apple, is the title of this year’s Met Gala and corresponding Costume Institute exhibition. “It was a perfect time to say that this is what’s coming in terms of how we’re investing in our content,” Plagemann continues. “The fundamental reason for doing all of this is enhancing and protecting the relationship and the experience for the end user.”

We will look at something 88 times before we decide to do it because we have an incredible jewel to protect. But those who are successful give people what they need before they ask for it.

While the changes are surely meant to entice advertisers as well as readers, they also reflect sustained belief — and added investment — in the power of print. (The publication has one more feature-well story in May than usual and two bonus stories are slated for September.) Indeed, Vogue may have attracted recent headlines for its efforts to make up for lost time online — Vogue.com’s dedicated staff of more than 50, the launch of Vogue Runway, a podcast, high-profile video content — but the brand isn’t forgetting about its core product.

Plagemann, who faces increasingly stiff competition for advertising dollars, aims to serve the reader through every channel — all the while maintaining and harnessing the sense of authority and heritage that distinguishes the brand from its competitors, no easy feat in a fast-changing and turbulent media environment. Of course, a large percentage of media consumption has shifted online, where content is abundant and cheap. The Internet is also a giant unbundling (and rebundling) machine, challenging the relevance of traditional content bundles, like newspapers and magazines, which have been upstaged by Facebook’s News Feed, whose algorithm, since 2013, had favoured “high quality content.”

Indeed, what becomes of brand and brand experience when content is atomised — people consume the track, not the album; the article, not the magazine — and, especially on mobile, rarely leave dominant technology platforms like Facebook? (While US consumers use an average of 27 apps a month, 80 percent of that time is spent on just 5 apps, according to data presented by Michael J. Wolf at the WSJD Live Conference in October.) Already, the traditional homepage is dying, putting pressure on legacy titles to rethink the media paradigm of the last 10 years, largely based on traffic to websites, and become distributed media companies, which takes a very different strategy and has major business model implications.

What’s more, Vogue, as a key pillar of the Condé Nast portfolio, is under more pressure than most. In 2015, the publishing house closed Lucky and Details magazines, as well as Style.com — set to relaunch as an e-commerce player — and laid off dozens of editorial and sales personnel along the way, focusing its strategy around its most valuable brands: Vogue, Vanity Fair, GQ, Wired and The New Yorker.

So far, Vogue believes it has been rigorous about serving up its unique point of view across a wide range of channels. “We don’t do Vogue Lite,” Plagemann says. “We have one brand, we have one core DNA, and we don’t deviate from that. How the editors make that palatable in an Instagram post versus online versus in the magazine is up to their creative discretion. But it’s still Vogue. I don’t think that has changed.”

While the publication fell behind most of its competitors online, only launching a full-fledged website in 2010, it has attempted to catch up quickly by investing heavily in its digital presence and adopting a general-interest approach to fashion news, covering one story, such as Hedi Slimane’s departure from Saint Laurent, for example, exhaustively from multiple angles. The strategy garnered the site 10.3 million unique users in March 2016, up 72 percent from 6 million in 2015. In the past three years, the site has seen 700 percent growth, according to internal numbers pulled from Omniture, which tracks international mobile traffic, something that cross-platform measurement company Comscore does not do.

According to Comscore, Vogue.com had 5.3 million US users in February 2016, lower than Elle.com (7.4 million) and Harpersbazaar.com (6.3 million). But Vogue’s reach on social media platforms tends to be much greater. For instance, Vogue has 9.8 million followers on Instagram compared to Elle’s 1.5 million and Harper’s Bazaar’s 1.9 million. On Facebook, Vogue boasts 7.4 million likes. Elle, which has 3.8 million and Harper’s Bazaar, which has 2.8 million. In March, about 33 percent of web traffic came from Vogue’s more than 40 million followers across social platforms.

The publication is also doubling down on a visually rich app of its own, which features eight new stories a day, pushed to users based on personal usage patterns. The decision to develop the app was made last fall after a budget meeting. “We’ve been talking about this idea for the last 2.5 years, weighing in on when seems like the right time,” Plagemann explains. “If you want [marketers and consumers] to buy into your world, you have to present yourself seamlessly. For us, to have just launched an app and put it out there would have felt like, ‘Me, too.’ I applaud that the business and creative sides of our house really think unanimously about what the strategy should be, which I think is quite unique to how we operate and move.”

On the app, users are served an advertisement — often video — after every four personalised stories and after every eighth story in the news feed. While several advertisers have signed on for the launch, they will each have the space to tell their stories without the clutter of competing marketing messages. The approach reflects Vogue’s pledge to offer advertisers “100 percent share of voice” online. That means you’ll never see ads for two different things on one page of Vogue.com. “We really believe that our advertising model enhances the experience,” says Plagemann.

Vogue has made additional strides in creating new value for advertisers. For the April 2016 issue, New York- and Los Angeles-based subscribers received a polybagged supplement dedicated to model and social-media celebrity Kendall Jenner. The 52-page mini-magazine had a single advertiser — Estée Lauder — for whom Jenner is a contracted face. Online, readers could access all manner of Kendall content, from articles to videos. “Regardless of the business that you’re in, I think at the core of anyone’s success is that you are always offering solutions,” she says. “How those solutions morph and grow just change over time. I think at our core, what makes us successful is that we’re really good at anticipating and understanding what solutions people need. We just have more to work with, which is really exciting,” says Plagemann, who arrived at Vogue six and half years ago from a successful five-year stint at Marie Claire.

American Vogue has a number of powerful brand extensions as well, including the CFDA/Vogue Fashion Fund and the Met Ball. In November 2015, Plagemann was also put in charge of Teen Vogue. And while Condé Nast International — a separate division of parent company Advance Publications — is overseeing the development of the new Style.com, Wintour did join its board of directors in 2015, which indicates, without confirmation, that there may be some sort of relationship between Vogue and Style.com. “We will look at something 88 times before we decide to do it because we have an incredible jewel to protect and promote and make sure we don’t move at the whims of a trend,” Plagemann says. “Those who are successful give people what they need before they ask for it.”

One of Plagemann’s continual challenges is to convince advertisers that readers still covet Vogue’s influence and authority. Newsstand sales simply aren’t what they used to be and that is unlikely to change. In 2010, monthly single-copy sales of Vogue averaged 343,614, according to the Alliance for Audited Media. In 2015, they averaged just 193,941. To be sure, Vogue has fared better than many of its magazine competitors. Subscriptions were up 2.4 percent in the second half of 2015 and, according to the Association of Magazine Media’s brand audience report, which measures audience across print and digital platforms, the magazine’s overall readership was 18.5 million in February 2016, up almost 22 percent year over year from 15.2 million.

But audience reach is only one important metric. What may be more important for a premium title like Vogue is how consumers feel about the brand. Plagemann believes that in this era of content abundance, consumers crave editorship and direction even more. In a blind study of 2,000 American women aged 18 to 54, recently commissioned by Vogue and conducted by brand consultancy Millward Brown, Vogue and Vogue.com lead the pack in two important categories: the brand is seen as a significant source of information on fashion, culture and beauty, as well as a driver of purchase consideration. “People want people to help them edit,” says Plagemann. “It’s never demeaning, it’s very much leadership.”