Combining the tough, motorbike meets rock ‘n roll roots of Chrome Hearts and the otherworldly armour of Gareth Pugh, the collection will debut in January at the Chrome Hearts’ newly expanded shop-in-shop in The Wonder Room at London department store Selfridges. 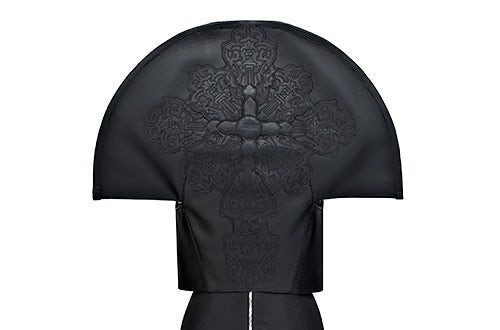 “It’s something that happened very naturally,” Pugh told BoF. Introduced by Michèle Lamy, wife and business partner of American-born designer Rick Owens (the two own a 49 percent stake in Pugh’s label), Pugh and Laurie Lynn Stark of Chrome Hearts began a transatlantic creative collaboration that was split between London and Los Angeles. “I’ve been a huge fan of his — really, since a long time ago, I started going to the shows, loving and trying to get a piece just for myself,” said Stark.

After Pugh’s Spring/Summer 2014 runway show in Paris, the designer and his partner Carson McColl took off with Stark on an impromptu whirlwind trip to Los Angeles, where Chrome Hearts’ 200,000 square feet factory is based. “The tour of the factory was incredible,” recalled Pugh. “To see how they make all of, even the chains and how each link is cast individually.” The brand’s chunky silver jewellery — engraved with the fleurs-de-lys, crosses, and other motifs that Chrome Hearts has made its own — has achieved cult status. The 25 year-old brand counts personalities as diverse as varied as singer Cher and Korean pop star G-Dragon as fans, and has a network of 22 standalone stores in the world.

The project was also borne of a shared respect for craftsmanship and a commitment to product integrity. “It’s that kind of hand done element that exist [also] within the pieces that we produce in the studio, so more than on an aesthetic level, it’s that attention to detail and that love of craft that is actually the thing that makes sense between the two of us,” said Pugh. “It’s amazing to think that you’re not just bashing something out.” Indeed, even the mannequins and wooden pedestals on which the products reside were hand made and customised in the Starks’ wood shop.

Unexpectedly, Pugh found himself drawn to his British roots, even as he was surrounded by the “hysterical feminity” and Old Hollywood glamour of Los Angeles. A towering, feathered headpiece is reminiscent of the conical, tassled helmets donned by the Queen’s horse guards. A leather jacket with exaggerated shoulders is embellished with intricately layered, hand-stitched leather shapes made from cowboy boots. 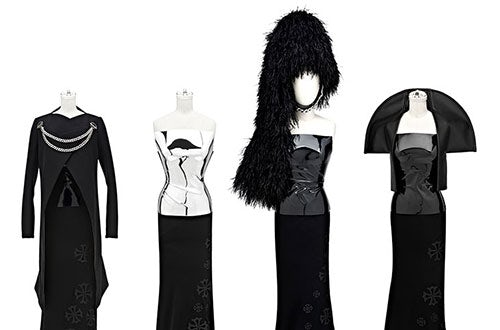 The collection’s crowning piece is a bustier cast entirely in Chrome Hearts’ signature polished silver and stamped with both brands on the inside, much like a collectible. Given how labour intensive many of the pieces are, they are priced upon request. Shoes and other accessories, however, will have a larger commercial run.

The project marks another step in the evolution of the Gareth Pugh brand under the guidance of Lamy. Though the designer garnered early critical praise for his futuristic vision and experimentation with materials like perspex and PVC, in recent seasons, Pugh’s work has become softer around the edges and grown a romantic, more salable streak. His latest collection even displayed flashes of teal and mauve, however brief, a departure from his signature black.

Sales are “going in the right direction,” said Pugh, who declined to divulge revenue figures. “[But this project] is not about selling, really. It’s kind of more about re-imagining what we did in the show, but through different eyes.”

Starks’ commitment to American-made, hand-crafted goods, in particular, has inspired the young designer. “We were constantly told by our commercial advisors that it can’t be done. But you can create your own blueprint and seeing Richard and his attitude has galvanised us,” said Carson McColl, Pugh’s partner and showroom manager.

Both Pugh and Lynn Stark referred to the project as “ongoing.” Does that mean another collection is in the works? They’ve already discussed menswear, they said, but nothing is planned, which is just as they like it.

“It’s not set, which is the great thing about it, because this is the freedom of what being an artist is,” said Laurie Lynn Stark.