In a global exclusive interview to coincide with the unveiling of a new advertising campaign for Ermenegildo Zegna, a part of the brand's repositioning strategy, Imran Amed sat down with head of design Stefano Pilati to discuss his plans for modernising the venerable Italian menswear label, while embracing its rich heritage in tailoring and fabric development.

LOS ANGELES, United States — Since joining Ermenegildo Zegna as head of design in January of this year, Stefano Pilati has kept a low profile, shunning backstage interviews and staying out of the limelight, seeming to prefer to let his work speak for itself instead.

A major manufacturer of luxury textiles and suiting (for brands like Tom Ford and Gucci) and a purveyor of classic men’s tailoring under its own Ermenegildo Zegna label, Zegna is the largest luxury menswear player in the world, with more than €1.2 billion (about $1.6 billion) in annual revenues. But in the face of growing competition in the luxury menswear sector, Pilati has been brought in to bring a new, fashionable edge to the powerhouse, tradition-steeped menswear brand by designing its "Zegna Couture" collection and overseeing the brand’s overall image.

But when it came to directing the opening of Zegna’s brand new flagship on LA's Rodeo Drive and the unveiling of his first ad campaign for the company, Mr Pilati says he hesitated to get too involved. “There was a moment where I thought, ‘Well maybe I shouldn’t participate, because it is not really me,’” revealed a polished yet effortlessly cool Pilati, (dressed in a delicately embellished bomber jacket from his debut collection, paired with jeans and a t-shirt) over breakfast at the Chateau Marmont hotel in West Hollywood, the day after a star-studded store opening party.

Pilati explained that it was actually go-to luxury architect Peter Marino who designed the new Zegna store, which has been conceived with a more classic Zegna aesthetic in mind. “But then at the same time, I am part of Zegna, so I wanted to support the event. It was the first time, in a way, that I was here officially for Zegna.” 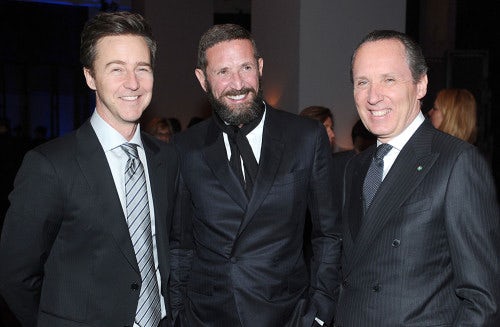 Indeed, the LA party was effectively Pilati’s public debut for the Italian menswear behemoth (complete with the requisite celebrity shenanigans, including photos with Sharon Stone, Gerard Butler, Edward Norton and Joe Jonas) for which the designer oversaw practically every detail, right down to the deejays.

“They have art names but I don’t remember them,” jokes Mr Pilati when I ask him about the layered, electronic music that played in the background as the good and great of Hollywood mingled with Zegna executives and members of the international press. He knows the deejays' real names, of course. In fact, he brought them to Los Angeles from his current home base in Berlin. “One is François and the other one is Todd. They are both very good, so that is why I brought them here,” he adds, showing he is as plugged-in as ever into the creative zeitgeist.

This talent for plucking what’s cool out of the air has been a key pillar of an impressive career, during which Stefano Pilati has become one of the most talked-about fashion designers in the world. As creative director of Yves Saint Laurent, he was singled out by New York Times fashion critic Cathy Horyn, in 2005, as one of six “elite” fashion designers in Paris, alongside Marc Jacobs, Nicolas Ghesquière, Phoebe Philo, Olivier Theyskens and Alber Elbaz.

But the YSL role was the first time Pilati had stepped out from behind-the-scenes and into the limelight; he previously worked alongside some of the industry’s greatest designers — first Giorgio Armani, then Miuccia Prada and Tom Ford — but always in the background.

Churning out four collections a year for Yves Saint Laurent was no easy task, especially under the growing glare of the global fashion spotlight, amplified by the knowledge that the brand’s legendary founder, who died in 2008, and his business partner, Pierre Bergé, were watching as he tried to forge a modern identity for the venerable French brand.

Finally, in 2010, after a decade in the pressure cooker of Parisian fashion, Mr Pilati exited YSL, having been dogged by rumours and speculation for several seasons about his impending departure. Afterwards, he hinted to the media that he was ready to take a break — that was, until he had dinner with Gildo Zegna, the affable and energetic chief executive of Ermenegildo Zegna, whose grandfather started the brand in 1910.

Through the powers of persuasion, Mr Zegna brought Pilati out of his self-imposed professional hibernation by exposing him to the rich heritage of the Ermenegildo Zegna business and offering him the chance to simultaneously build a new womenswear line under the framework of Agnona, a dormant womenswear brand owned by the Zegna Group, and design for Zegna Couture, a collection which sits at the very top of the brand’s pricing pyramid and acts as a communication vehicle for Zegna as a whole.

For Pilati, it proved to be too irresistible an opportunity to turn down.

Mr Zegna saw Stefano Pilati as the ideal man to re-spin Zegna’s rich heritage into something more modern, with a current fashion edge; something that could help place Zegna comfortably alongside Louis Vuitton's menswear offering, designed by Kim Jones, and Berluti, which was in the process of transforming itself from a bespoke shoemaker into a men’s luxury lifestyle brand under former Z Zegna designer Alessandro Sartori.

In June, Mr Pilati unveiled his first collection for Zegna Couture to rave reviews. “The soul of the show was in the feeling” that Mr Pilati brought to the brand, wrote Suzy Menkes in the International Herald Tribune. Tim Blanks said the  presentation “set Pilati's clothes in a cultural continuum of music, film and fashion.” And, Alexander Fury of London’s Independent newspaper declared: “What Pilati did today was give Zegna a fashion relevance, and a fashion identity. ”

The oversized backdrop for the Milan show was a striking short film, directed by Johan Soderburg, released today for the first time online, here on BoF. Critically, the video broke with formulaic fashion film tropes and avoided the usual pouting models. Nor did it attempt to showcase Zegna’s heritage with a cast of "artisans" in white lab coats. Instead, it exposed the very nuts, bolts and machinery that create Zegna's luxurious fabrics, which lie at the heart of the business and formed the basis for Mr Pilati’s ideas for taking the brand forward.

“With the collection, I was trying to define those territories that define Zegna, the industry; the factories; the industrial savoir faire,” he explains. “That is why, I put the video for the show together. I found out about the machines, organising a kind of a sound and concept that could show this industry from a contemporary point of view. Everything that has been done in the savoir faire, for me, was a bit boring. I wanted a kind of newer way.”

What’s more, because Zegna lacked any sort of real fashion identity to begin with, and was born instead from a history of textile and fabric development, Mr Pilati was able to inject his own ideas into the brand and set the framework for what Zegna’s fashion statement could be, rather than working within the structure of a fashion brand that was already far more defined (and possibly, even, weighed down by history) like YSL.

“When I started to work on the last collection, I said ‘How can I make the Zegna man distinguished in the menswear landscape?’ And I thought, you know, a gesture of luxury. It can be translated in the use of colour, without necessarily looking like a dandy or a peacock. You can do it elegantly, all based on nuances,” he explains.

“I have a huge wardrobe from since the time I was a kid and I have a lot of sweaters and a lot of jackets and I put them together in a way that I can go to meet Gildo and be ok, in front of all the businessman,” he explains. “Let’s assume that our luxurious customer has everything already. If I introduce the use of colour, you can be formally elegant, but still quite original. That for me is the role that Zegna needs to take on menswear.”

But Zegna Couture represents only a small fraction of the overall Zegna business. This posed a conundrum for Pilati when Gildo Zegna asked the designer to create his first ad campaign — one that could speak for the entire Zegna brand. Pilati realised he would have to strike a balance between Zegna’s more classical tailoring and the design-led approach of the Couture collection.

“How can I keep the two things together?” Pilati asks himself. “If I showed only colour, floral, broken suits with a scarf instead of a tie, it might be a bit too ‘Whoa, what’s going on there?’ There are two elements and they need to go together.” 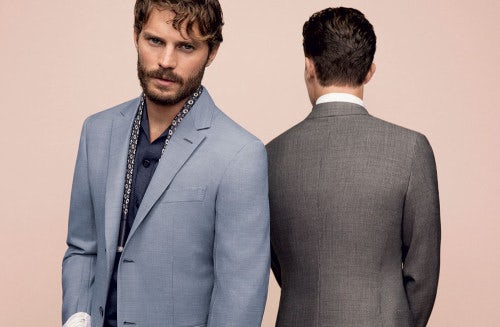 Ultimately, Pilati conceived of a campaign, shot by Inez & Vinoodh, called "The New Éminences Grises," to showcase the relationship between the frontman, in this case, actor Jamie Dornan, dressed in Ermenegildo Zegna Couture, and Paolo Anchesi, a rising model who played the part of an influential, behind-the-scenes figure, dressed in Zegna’s mainline. “Ninety percent of the time, a man in grey has a Zegna suit on and I like that idea. It was just a matter of an association of ideas,” says Pilati.

The final piece of the communications puzzle was another film created by Soderburg, this time featuring Stefano Pilati himself doing a cheeky turn as a television new anchorman. When Zegna’s communications team approached him, he suggested the idea on the fly, not thinking that they would actually agree to his off-the-wall approach.

"[They] came to me and said, ‘We normally do a video, where we actually explain the concept of the campaign — would you like to do it? Obviously, I hate this kind of thing, but I said ‘OK, I will do it,’ only on one condition: that I can do it as a form of CNN news. If you really listen to it, you understand what the campaign is and why I did it.”

In direct contrast to Pilati’s runway video, which was quite considered and had been very carefully crafted, the anchorman video seemed to say, ‘Listen, I don’t take myself so seriously, this is fun!’

Indeed, this seems to be the greatest change of all in Mr Pilati’s approach to fashion since joining Zegna: he is finding real enjoyment in doing his job. It doesn’t have to be heavy, or onerous. A big part of this seems to be due to a budding relationship with Gildo Zegna.

"We are about the same age, so we understand each other in a way. We are both Italian, so that helps. But we also come at things from completely different points of view, so we learn a lot from each other. In a way, I am educating him too and teaching him a kind of fashion vocabulary, and he is someone I can really talk to, which is something I haven't had since I left Prada."

The back and forth with Mr Zegna about repositioning the brand has forced the duo to work closely together. “It seems the logical in a way, because we both need each other. I don’t like to be creative for the sake of being creative, he says. “I want to make sense of what I am doing.”

Disclosure: Imran Amed travelled to Los Angeles as a guest of Ermenegildo Zegna.