About 8 months after LVMH took a minority stake in his label, JW Anderson has moved into a new head office and studio, hired his first CEO and announced the launch of his first retail channel. In an in-depth video conversation with the designer, BoF brings you an exclusive look inside the burgeoning fashion brand.

LONDON, United Kingdom — The smell of still-drying paint lingered in the air of a converted warehouse in London’s Dalston area. For the past seven weeks, the 4,000-square-foot, three-storey building had been under renovation, transformed from a former council house for bereavement services into the head office and studio space of designer Jonathan Anderson.

Mason jars sit at regular intervals atop expansive wooden tables, while the reception area is filled with artwork from Anderson’s personal collection. Very much on-brand, the rooms are starkly adorned and the colour scheme rarely strays from white, but the natural materials and light that permeate the space render it warm and inviting. 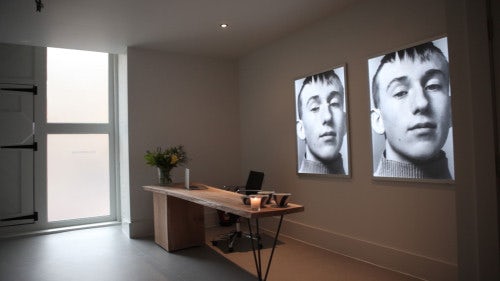 With his sandy hair and well-worn Converse trainers, 29-year-old Anderson — originally from Magherafelt, Northern Ireland — retains a boyish air that belies his recent accomplishments and growing industry influence. He sat down with BoF founder and editor-in-chief Imran Amed a week after moving his team into the company’s new headquarters, to discuss the major milestones his business has achieved since September 2013, when the luxury goods conglomerate LVMH took a minority stake in his label (the exact size of the stake and financial terms were not disclosed) and appointed him creative director of the group’s Spanish leather goods brand Loewe.

Even before the LVMH investment, Anderson’s brand was doubling its sales each season, said the designer, who has been busy putting in place a scaleable foundation to allow his business to continue on its trajectory of rapid growth, which had become difficult for him to manage. 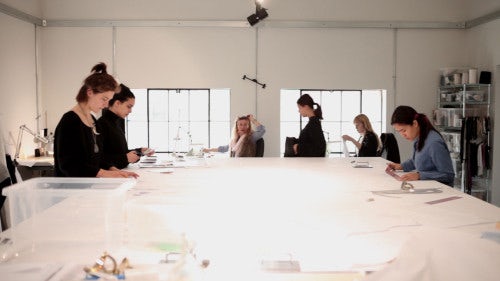 Pattern-cutting room at JW Anderson | Source: The Business of Fashion

The early results look promising. Wholesale revenues for both menswear and womenswear have doubled since September, bringing the label’s total number of stockists to more than 130. And the brand has focused on delivering its collections on time and at higher levels of quality and polish, something that Anderson seemed keen to improve after years of bootstrapping the business on a shoestring budget. Eighty percent of the pre-collection for Autumn/Winter 2014 has already been received in the warehouse and is ready to ship to new stockists like Montaigne Market, LuisaViaRoma and Barneys New York.

Anderson launched his directional label in 2008, focusing on menswear, just a few years after graduating from London College of Fashion. He added a women’s line in 2010. Blurring the lines between men’s and women’s clothing has since become Anderson’s design signature, a trademark that has permeated the fashion zeitgeist of late. 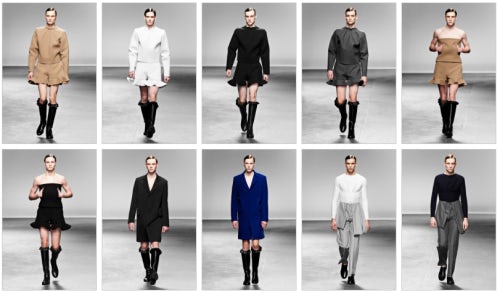 “I think it challenged something in people,” Anderson said of his genderbending approach, citing his Autumn/Winter 2013 collection as a turning point that crystallised his point of view and the brand’s perception in the marketplace. “From that moment, the men’s and the women’s became a talking point between each other.”

The lion’s share of the new funding has gone towards building Anderson’s team, including the hiring the brand’s first chief executive, which BoF can exclusively reveal to be Simon Whitehouse, who has previously held executive positions at Diesel and Matthew Williamson. Although Anderson had already taken steps to strengthen his company’s operational structure, he realised he needed a “partner-in-crime” to help manage his growing team of designers, merchandisers and sales professionals.

“I wanted someone who had a sales background and someone who could understand the needs of a small business and a younger team,” said Anderson. “The way in which he was speaking, I felt like I could trust and look up to [him].”

Anderson said he has also been honing the brand’s market positioning and pricing strategy. The brand has been performing much better sitting amongst other advanced contemporary and entry-level luxury brands like Sacai and Stella McCartney, owing to “shifts in many kinds of different demographics of consumers and what younger consumers were doing,” explained Anderson. “They wanted a fashion element at a price point which was in a mid-zone.”

And in its first ever retail venture, JW Anderson is set to launch an e-commerce website on 16 June, which the designer believes will serve as a holistic brand showcase, as well as a powerful platform for consumer engagement and feedback. It will stock “unique colourways, more products that we believe in that we have maybe not sold, or things that fill out the global picture, so that people could fundamentally buy into a look of a world that we could curate,” he said.

But with major developments afoot at his own brand, not to mention his simultaneous role as the creative director of Loewe, how does Anderson manage the workload and maintain a sense of balance in his life?

“I have an amazing support system,” he said. Alongside his teams at both brands, “I have got people like Pierre-Yves [Roussel] and people like Delphine [Arnault] and other designers within the group that you can talk to, to get advice.”

Pacing oneself is also key. “When you are doing this level of work it is like kind of training for a marathon. You cannot take the whole thing at once and sprint it.”

Watch the highlights video of our exclusive interview with JW Anderson above.