NEW YORK, United States — The online fashion media universe is about to take a most interesting twist. After several months of planning (and more than a little industry speculation), Style.com will unveil its first ever physical magazine at the end of October, only a few weeks after the last Paris Fashion Week show has ended.

Back in the early 2000s, when fashion Internet sites still struggled to gain traction and credibility, this kind of move would have been unthinkable. Today, Style.com considers the magazine a natural extension of the formidable media brand it has built over the past ten years and an opportunity to create new revenue streams.

The editorial team is a mixture of new faces and respected Style.com authorities. Lina Kutsovskaya, formerly of Nylon Magazine and Teen Vogue, has been hired on as creative director. But there will also be doses of insightful commentary from Tim Blanks and Nicole Phelps, as well as contributions from a number of freelancers, in particular, young photographers.

But that is not all. Style.com has also exclusively revealed to BoF that it will also be making its first — albeit tentative — moves into e-commerce. Six yet-to-be-revealed New York-based designers will provide “Instant Gratification” to their customers, delivering selected items from their Spring/Summer 2012 shows at the end of October, right around the time of the launch of the magazine, which will also promote these items. This puts Style.com into direct competition with everyone from e-commerce juggernauts like Net-a-Porter to fledgling start-ups like Moda Operandi, which also offers runway purchases (though these are not delivered until 4 to 5 months after the order is placed.)

I sat down with Style.com editor-in-chief Dirk Standen to learn more about these interesting moves and get the lowdown on his broader strategy for Style.com as it enters it’s second decade.

BoF: There are so many things to discuss regarding Style.com, but first I thought we could talk about the magazine. What inspired the decision to launch a physical publication now?

DS: If you look at the big picture I don’t think [media] brands can afford to be tied to one medium anymore. Obviously you see that with magazines paying a lot of attention to their websites now. But even on the web, it’s not enough to just have a website. You have to be on various digital devices. You need to be on the various social media sites. You want your content to be available in as many places as possible.

Now that we are within the Fairchild umbrella, which has a lot of experience and a great deal of expertise in publishing, it became a natural extension for Style.com to do a magazine. From a business point of view it makes a lot of sense in that some magazines are still doing well. That, and also there are possibilities for cross-selling across print and the web.

DS: Yes, and in terms of edit. I think it’s a real opportunity for our editors to paint on a bigger canvas; an opportunity for a new kind of storytelling that they can’t quite do on the web.

BoF: But how will it distinguish itself from the glut of fashion magazines that are out there? What will make it different? 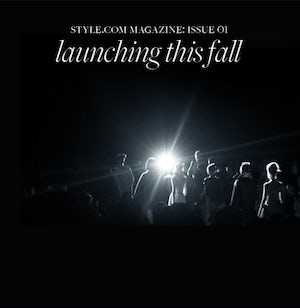 DS: It’s going to be very much focused on Spring/Summer 2012 collections. We are going to spotlight the most interesting people, places and clothes of the season, but beyond that we are hoping to convey to the reader what the experience of going through that intense four week cycle is like.

When you work in fashion you can get used to it, but when you step back, it’s a really extraordinary experience. In movies they have Cannes; the art world has Art Basel. But those are only one week during the year. This is 4 weeks, twice a year, with all these people in close proximity under a lot of pressure. There is a real story to be told that maybe hasn’t been told. I think if we can combine emotional narrative storytelling with the kind of authoritative reporting that Style.com already does, we can create something that is fun.

BoF: So you see this is as a consumer proposition, to give them a window into the industry?

DS: Yes, absolutely. One of the things that Style.com has done over the years — and obviously we weren’t alone in this, but I think we were at least in the vanguard — is opening up what was a very closed system to a lot of people; to millions of readers. Everyone can see the clothes right away; so they don’t have to wait for months to see them like they did 10 years ago.

For whatever reason, I think fashion has become one of the most interesting places in the culture. There is a huge fascination out there and amongst the public for what goes on inside fashion. Movies and even music were more interesting in the 70s, when you wanted to be in Hollywood. I think now the places you want to be are fashion or the art world. They have replaced entertainment in a way.

BoF: Another thing that Style.com is known for is its immediacy. It sounds like you are also trying to get the magazine out really quickly, much more quickly than most other fashion magazines?

DS: Speed has always been in the DNA of Style.com and we want to carry that over to the magazine. Then in terms of frequency, it’s a natural extension to do it after the next round of shows and maybe something that we do three or four times a year based around men’s. It might become more of that down the line, but we are taking it one step at a time. We have to get through the first round, like you say, in an incredibly short time span first, and then we will see.

BoF: Speaking of immediacy, tell me about "Instant Gratification."

DS: We are working with 6 New York City designers to be announced during fashion week. They are going to make a very limited number of pieces available directly from their Spring collection, so that people will be able to buy them right away. We are going to coordinate it with the launch of the magazine so, technically end of October. They will be able to buy it and will receive a nice package in the mail within days.

BoF: Is it fair to say "Instant Gratification" is Style.com’s first foray into e-commerce?

DS: Yes. This is perhaps more like dipping a toe in the water, but we absolutely think e-commerce should be and will be some component of what Style.com does going forward. We are actually talking to a couple of potential partners about perhaps doing something on a bigger scale. Advertising will always be an important part of the mix and in fact, it’s growing. A lot of luxury companies are now advertising on the Internet in ways that they haven’t necessarily done before. But I think you still need a combination of different things going forward.

One of the great things of being with Fairchild is that it’s a team led by our CEO [Gina Sanders. President and CEO, Fairchild Fashion Media], who is willing to experiment and believes in the brand and is willing to try different things to grow the brand. The magazine is one example of that. It’s been a really great thing for Style.com.

BoF: Thinking about the whole connection to Fairchild and Condé Nast, American Vogue launched a website which now competes with Style.com for traffic and advertisers. And Style.com is now going the other way, from the screen to the printed page. How do you think Style.com differs from Vogue?

DS: I think this will evolve over time, but one thing that has always distinguished us is speed. The combination of speed and authority is something that Style.com has done very well. And, we have always been on top of technical innovation. We were the first major fashion site on the iPhone and now we are the first major fashion site that is launching a magazine. We have a history of innovating and will continue to innovate.

Style.com is also really a site and hopefully a magazine for fashion obsessives, by fashion obsessives. We do focus really, really deeply and strongly on fashion and obviously all the other publications do that as well, but they have a lot of other areas of interest in their magazines, if it’s celebrity or music or even politics.

BoF: Also, Vogue doesn’t cover menswear. With the launches of Mr Porter and Park & Bond, there seems to be increased attention on menswear, and while men.style.com is no longer, Style.com is now covering the men’s shows. How important is the male audience in your new strategy?

DS: We absolutely think Style.com should be the place where you see all the major fashion shows, whether they are men’s or women’s and in fact we saw a huge spike in traffic for the men’s shows this time, so that’s something we are really looking at. A big degree of our audience is as interested in men’s fashion as women’s fashion.

We also have seen the interest grow outside too. With men.style.com certainly, I’m not sure the industry was quite there yet, or that there were enough men buying designer fashion at that point. It has really exploded in the last couple of years and [the retailers] all seem to say the men’s business is growing at a great rate if you compare it to the women’s business, even with the economic ups and downs. Obviously, we would like to be there with them.

BoF: Part of the traffic spike might have to do with all the new content you are creating around fashion week, especially the street style imagery, initially with Scott Schuman and now with Tommy Ton.

DS: We’ve done fantastically well with street style and been lucky enough to work with probably two of the best in their field. There will be more growth there and we will bring in some fresh voices, and we want to work with some other people too. We’ve always sought to work with people who we’ve thought are the best in what they are doing, rather than just go out and grab onto the next big thing, or someone who is getting a lot of press. But, what you say is absolutely true. We’ve been incredibly lucky to be part of this burst of interest in the public that has grown up around it. We’ve ridden that wave and I think it’s going to continue.

BoF: Indeed. Interesting times ahead, in particular as we see how Style.com magazine is received.

DS: I wouldn’t want anyone to think we are arrogant about going into magazines. I mean there are people who have been doing it for a lot longer than us and doing it really, really well. Hopefully people think we have something fresh to add.

It’s funny coming from the internet side. Obviously, you have to have great content and on top of that there is the whole technical side, which is a big part of it, so you think, ‘If I didn’t have to deal with the technical side and all I’m thinking about is the content the images and the words, that must be easy!’ But when you start to get into it, to give emotion to a magazine page is not an easy thing.

WHAT DO YOU THINK OF STYLE.COM’S VENTURE INTO THE WORLD OF MAGAZINES AND E-COMMERCE?