As the relationship between fashion and basketball deepens, the collaboration marks the league’s first big push into luxury goods.

As the relationship between fashion and basketball deepens, the collaboration marks the league’s first big push into luxury goods.

LOS ANGELES, United States — “I grew up in the height of the Jordan era,” says Greg Chait, the 38-year-old designer behind the Los Angeles-based luxury lifestyle label the Elder Statesman. “Barkley, Jordan, Malone, the end of Magic Johnson’s career… I was heavily influenced by the NBA. There was no thing bigger.”

It was a genuine affinity for the sport — combined with a unique understanding of his customer — that drove Chait, best known for his work with cashmere, to pursue a long-term partnership to produce luxury apparel and accessories with the National Basketball Association, the US professional basketball league that generated $5.2 billion in revenue in 2015, according to estimates by Forbes. The early fruits of what is a multi-year contract will arrive at Barneys New York in limited quantities on November 4.

The line, available in both men’s and women’s sizes, includes accessories as well as t-shirts and sweaters, ranging from $420 cashmere beanies intarsia-ed with any one of the league’s 30 team logos to $590 printed silk-cashmere t-shirts to $1,620 crew-neck cashmere sweaters. For fans who wish to remain team agnostic, Chait — whose main collection is rooted in high-quality raw materials, with many pieces hand knit in his own Culver City studio — has designed a $1,560 felted cashmere sweater printed with the NBA logo. 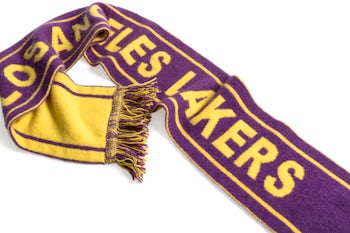 The first edition of the collection will be sold at Barneys, with additional drops made through the Elder Statesman’s own direct-to-consumer channels, which include a physical retail store in West Hollywood and e-commerce. (Chait also has a significant private client business, offering custom knitwear and home goods, as well as interior design services.) New products will be introduced throughout the season, linked to the Christmas holidays, the NBA’s All-Star Weekend in February 2017 and the NBA playoffs and finals in June.

“We are excited to be working with a brand like the Elder Statesman to offer such unique, premium products to our fans,” says Lisa Piken Koper, the NBA’s vice president of global partnerships. “The NBA and fashion naturally cross over, and this line is a great expression of that overlap.”

Basketball’s star athletes have long played a role in sneaker culture, from the introduction of the Converse All-Star in the 1920s to the launch of the Air Jordan 1 in 1984. But over the past decade, many NBA players have become almost as well known for their off-court style as for their on-court moves.

Today, players including LeBron James, Kevin Durant and Dwayne Wade frequently sit front row at fashion shows both in New York and Europe, and many some even launched their own collections. For instance, Oklahoma City Thunder player Russell Westbrook has collaborated with Byredo on a fragrance and Barneys on multiple capsules that feature items designed in partnership with his favourite brands.

The movement was, in part, spurred by a “business casual” dress code implemented by former NBA commissioner David Stern in 2005, requiring sidelined players to wear a sport coat, dress shoes and socks to games, and for all players to wear business casual attire — or “neat warm-up suits” — while leaving the arena or conducting any sort of NBA-related business. Banned items included t-shirts, headgear (such as do-rags), sunglasses worn indoors and metal chains.

I thought, ‘No American luxury partners for American sports? This a big opportunity.’

While there was some backlash to these guidelines from players, some of whom felt the rejection of so-called “urban” gear had racial implications, most embraced the change. “Because of the competitive nature of these players, once they learned about fashion, they started going deep into it,” says Marc Beckman, chief executive of DMA United, a talent agency that represents Westbrook, among other athletes. “Basketball players are influencing fashion similarly to the way the way hip hop artists were 15 years ago. Now, basketball is setting the stage.”

Of course, the convergence of fashion and professional sports teams reaches far beyond the arc of the three-point line. In the mass market, online retailer Fanatics Inc., which sells fan merchandise across the country’s four major sports — baseball, basketball, hockey and American football — generates $1 billion in sales each year, and recently signed a deal to become the official supplier of replica jerseys for the National Hockey League (NHL). 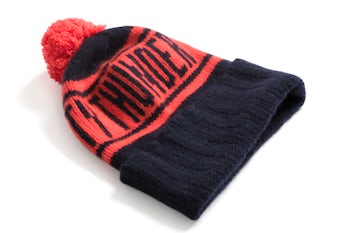 Last year, Lanvin signed on to be Arsenal’s official tailor, while Italian label Trussardi designed a collection for Turin’s Juventus Football Club. Giorgio Armani has also linked up with German football club Bayern Munich for a partnership that, this year, was captured by the football-loving photographer Juergen Teller.

Chait, who was raised in Canada, recalls a youth studded with memories of the NBA.  There is, after all, one Canadian team that plays in the league and there used to be two. The idea for the partnership also came out of his ambition to make the Elder Statesman a lifestyle brand with staying power.

A big inspiration was the Canadian outdoor brand Roots, which he remembered having a significant presence at the 1988 Winter Olympics in Calgary. The first fully-formed nugget of the idea, however, emerged when he designed a custom sweater for a private client, New York Giants owner Steve Tisch, intarsia-ed with star wide-receiver Victor Cruz’s number in honour of the American football team’s 2012 Super Bowl win.

Chait asked Tisch about the Giant’s official partners in luxury space. He found that outside of the automotive category — and Tiffany & Co., which makes the championship rings — there really weren’t any. “I thought, ‘No American luxury partners for American sports? This a big opportunity,’” he recalls.

Chait also met with several NBA-team owners who happen to be private clients and were receptive to the idea. “I wanted to get a real partnership done, and the NBA was super hip and into the idea. They didn’t come in and put a bunch of restrictions on me, they respect the Elder Statesman for what it is,” he says. "They know that my brand is very small compared to theirs, but they like what we stand for and that we’re an American company. They like our crazy colour-blocking and our tie-dying. That’s the stuff they’re most excited for.”

To be sure, Chait stands to grow awareness of the Elder Statesman as a result the project. The private company, which sold a minority stake to fellow Los Angeles-based label Chrome Hearts in 2014 after winning the CFDA/Vogue Fashion Fund in 2012, has taken a slow-and-steady approach to development, investing in vertical production and fine materials. “We don’t cut corners,” Chait says. “The idea was that it would be a [long-term] business. From the inception, that’s always been the plan.” Indeed, Chait was much less interested in a fleeting one-off collaboration than a partnership that could have genuine, sustained impact on his business.

It is, of course, something of a coup for the NBA as well. The league has likely benefited from the growing fashion savvy of its players, as a higher profile off the court can help sell tickets to games, as well as basic merchandise such as jerseys and caps. But the partnership with the Elder Statesman could help further embed the NBA into the fashion conversation, harnessing Chait’s ability to create luxury clothing that pairs as well with sneakers as Italian suits.