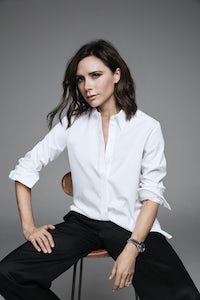 NEW YORK, United States — Victoria Beckham celebrated two five-year milestones in 2016. It's been five years since the birth of her daughter Harper and five years since the birth of her playful second line, Victoria, Victoria Beckham. So it seems natural that the two would serve as points of inspiration for her latest project, a limited-edition collection for Target set to launch April 9, 2017, at all of the US retail giant's physical stores as well as Target.com in the United States. The collection will be available in stores until April 30 or until supplies last, whichever comes first.

The collection is the result of several years of talks between the big-box retailer and the London-based company. "The timing just felt right," said Beckham, speaking exclusively to BoF. "I’ve made no secret of the fact that I wanted to put a collection out there for people who either can’t afford designer prices or don’t want to pay designer prices.”

“It was really about looking at the business, discussing it with my partners and my CEO, and just figuring out when that time was going to be," she continued. "And when I had the time to be as involved as I like to be with every single project I take on."

Comprising more than 200 items priced between $6 and $70 — with the majority below $40 — the collaboration includes apparel and accessories for women, as well as young girls, toddlers and babies, making this Beckham’s first foray into childrenswear. Silhouettes from the Victoria, Victoria Beckham line served as a primary reference point for the Target collection.

“The DNA of Victoria, Victoria Beckham lends itself to being accessed by a much broader number of people,” noted Victoria Beckham chief executive Zach Duane. However, Beckham, who launched her namesake ready-to-wear line in 2008, promised a fresh take on her repertoire, including some joyful prints. “It's quite girly, fun, happy,” she said. “I’ve always said [the VVB collection] is the other side to my personality, it’s the other half of my suitcase. The fun side of me."

Beckham, known for her prowess with fit, has executed a lineup of dresses, rompers and separates available in women’s sizes XS-3X. (While not all Target locations will carry the collection in plus sizes, each item will be available in the full size range on Target.com. This is the first time plus-size product from a designer collaboration will be available in-store. Typically, it’s only available online.)

Several pieces will be reimagined for kids in sizes NB (new born)-XL; accessories will include scarves for women and other items for children. (There will be no shoes or handbags.)

Beckham has also chosen to stock select items on her own website, Victoriabeckham.com, so that international customers have a chance to shop the goods. “It’s just a very modern way of approaching collaborations,” Duane said. "In the past, you would give your designs to a partner and it’s down to their distribution platform. Today, people shop in a very different way."

"They want authenticity; they want to know that a brand is very proud of a collaboration and wants to build it into its own storytelling," he continued. "Why wouldn't we sell key styles of the collection through our website, where we engage directly with our customer?"

The collection constitutes something of a milestone for Beckham, who has been ginger with brand development. Other than the makeup line launched with Estée Lauder early this year and a capsule with Nails, Inc., she has not engaged in any notable collaborations.

"I can reach so many more women through working with Target," she said. "It's not just because of the price point but because of how many stores that they have, located all around America. These are women that I haven't been able to reach out to in the past, and I always say that I want to empower women and make women look like the best versions of themselves. That shouldn't be only people who can afford to spend a certain amount of money."

The 2014 opening of a direct-retail store in London was a turning point for the business, which generated £34 million ($41 million) in revenue that year according to documents filed with Companies House. However, the private company declined to comment on its performance over the past two years.

In March, Beckham opened a 2,198-square-foot outpost in Hong Kong’s Landmark shopping centre. And more brick-and-mortar locations are tentatively planned. “We’re in the expansion stage,” said Duane, who noted that the company’s business is spread quite evenly geographically. “But we’re also a very young brand, less than 10 years old and relatively early in the stages of developing retail.”

As one of the most famous women in the world, Beckham does not necessarily need Target to help boost her brand recognition. Instead, the brand is using Target's broad reach to introduce a new customer to her fashion offering, and to test out the children’s market. "Kids is something I've wanted to do for a long time," she said. "That may well be the next category that I really go into. Who knows."

The partnership is also a boon for Target, which has focused on signature categories — including style, kids, baby and wellness — since the arrival of chief executive Brian Cornell in August 2014. Beckham is certainly the most famous person to ever team with Target; and bringing childrenswear into the mix allows the retailer to buoy two crucial categories at once.

In 2015, Cornell made a push to transform the Target kids’ business, discontinuing its license with Cherokee and introducing in-house home goods collection Pillowfort as well as apparel and accessories line Cat & Jack, which is set to generate $1 billion in sales during its first fiscal year.

“Victoria represents so many facets of what we look for when choosing a design partner,” said Target chief merchandising officer Mark Tritton, who joined the retailer from Nordstrom in May. “I think she saw in us an opportunity to learn about the [mass market] business and engage in that business in a modern and relevant way. Not only bringing her great design to women, but kids as well.”

Indeed, while Target may have been a pioneer in collaborations between high-end designers and mass retailers, it has become increasingly challenging to extract value from these kinds of partnerships, which are now commonplace. While the goal of these collaborations is not to significantly boost the top line — the number of total units are so small that the revenue implications are relatively insignificant — the hope is that the fervour created around the collections will not only generate millions of media impressions, but will also drive foot traffic into stores as well as clicks online.

In the past, Target's most successful collaborations — including those with Missoni and Lily Pulitzer — have created outages onTarget.com, resulting in immediate sales loss but longer-term marketing gain.

“I think that the collaborations are more important today than ever before because it gives them a point of difference. If a collaboration is executed correctly, it brings people into the store to ring the register,” said Marc Beckman, chief executive of DMA United, a talent agency that has brokered deals for several of the Target collaborations on behalf of the designers it has represented. “Consumers want to see these collaborations because they’re looking for relevancy from retailers.”

It is also likely that Target’s upfront investment in Beckham was on the high-end of what it typically pays to work with designers and brands on these kinds of collaborations. For emerging designers, compensation for collaborations like these is often in the upper six figures. Established names can negotiate deals that reach between $1 and $3.5 million.

“The reality is that retailers need to sign up partners and collaborators in order to bring foot traffic as well as to create a positive halo effect,” Beckman said. “They’re not doing these collaborations to generate meaningful revenue or growth — at all. It's to bring customers into the door."

Betting on a big name like Beckham suggests that Target believes it has yet to exhaust the power of the formula it helped to pioneer. Beckham, for one, is excited to see how consumers react. “These are clothes that I want to wear," she said. "I feel that I’ve been very, very honest with myself, my customer, and I am hoping to find a new customer as well."