Chinese nationals with a ready-to-wear business will compete for the attention of jury members Pierre-Yves Roussel, Tim Blanks, Uma Wang and Victoria Beckham among others to win the first global fashion award dedicated to emerging Chinese design talent.

Chinese nationals with a ready-to-wear business will compete for the attention of jury members Pierre-Yves Roussel, Tim Blanks, Uma Wang and Victoria Beckham among others to win the first global fashion award dedicated to emerging Chinese design talent.

LONDON, United Kingdom — The Business of Fashion is delighted to reveal the panel of esteemed jurors that will be judging the inaugural BoF China Prize in partnership with Yu Holdings.

Founder and creative director of her eponymous label Victoria Beckham, former chairman and chief executive of the LVMH Fashion Group Pierre-Yves Roussel, Clot founder and creative director Edison Chen and more will join Imran Amed and Tim Blanks on the judging panel for the first global fashion award dedicated to emerging Chinese design talent in ready-to-wear. The winner will receive a cash prize of $100,000, a slot on the official fashion calendars of Shanghai Fashion Week and London Fashion Week, as well as mentorship from industry leaders. Applications for the prize are now open.

As China’s outsized role in the global fashion industry continues to evolve, the influence of Chinese designers grows with it. This remarkable transformation can be seen in many ways, but the lens of creative talent is an especially powerful one.

“Ten years ago, I came to Shanghai seeking emerging talent, and to be honest, it was really hard to find young Chinese designers back then. But fast forward ten years, and there’s young Chinese talent everywhere,” said BoF founder, chief executive and editor-in-chief Imran Amed.

“We launched the BoF China Prize to reward excellence among the most talented of emerging designers and to give a platform to the best Chinese nationals out there. We’re excited to search for that intoxicating blend of creativity and entrepreneurship to find our finalists and to help propel the winner’s business onto the global stage.”

Through a rigorous application process balancing commercial viability with overall design talent, BoF and a panel of jurors consisting of global industry leaders will select a small group of finalists to present their creations during Shanghai Fashion Week in March/April 2019. One winner will earn the opportunity to showcase their collection in September 2019 as a part of the official schedule for London Fashion Week and receive a cash prize of $100,000, in addition to mentorship from the extensive global BoF community of fashion industry professionals.

We’re excited to search for that intoxicating blend of creativity and entrepreneurship to find our finalists and to help propel the winner’s business onto the global stage.

The BoF China Prize is held in partnership with Yu Holdings, led by founder and chief executive Wendy Yu who has cemented her role as a prominent investor and patron of the arts in both international and Chinese brands. Recent investments include Mary Katrantzou, Cefinn, Airbnb’s Chinese rival Tujia and Chinese ride-hailing giant Didi Kuaidi.

“One of Yu Holdings’ key pillars is to support and nurture exceptional creative talent on a global scale. Through our partnership with The Business of Fashion in the launch of the BoF China Prize, we’re creating a new benchmark and opportunity for fashion designers from China,” says Yu, who first revealed the prize with Amed at the BoF China Summit during Shanghai Fashion Week.

“With the collaboration of our team, BoF, the jury and mentors, I’m excited to see the most promising talents benefit from international exposure, business development and accelerated growth.” 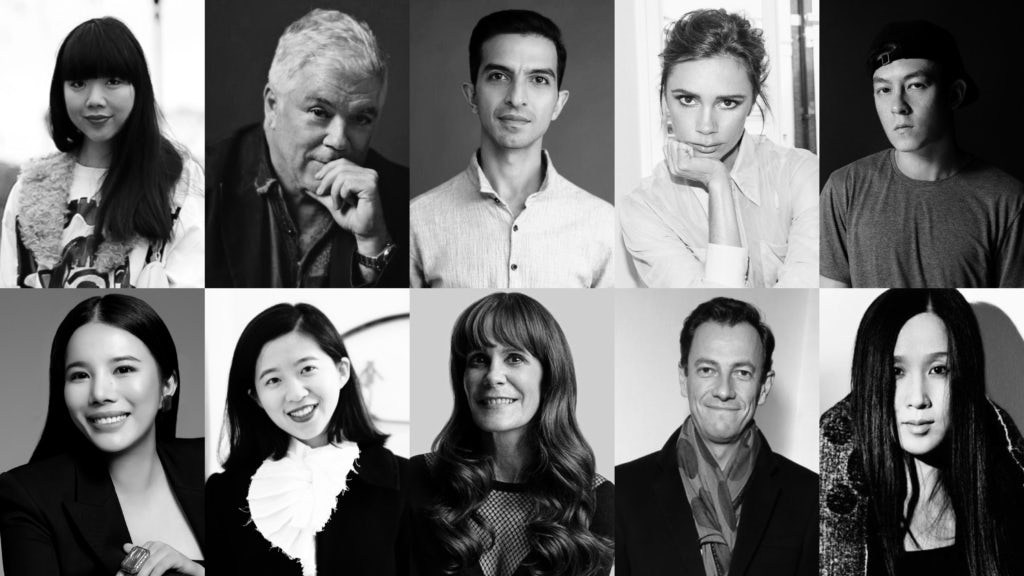 In addition to Yu and Amed, a number of high-profile fashion industry leaders will adjudicate the BoF China Prize. Joining BoF’s editor at large Tim Blanks on the panel will be former chairman and chief executive of the LVMH Fashion Group Pierre-Yves Roussel. Now a special advisor at LVMH, Roussel was behind the reinventions of Celine and Kenzo, and appointed Jonathan Anderson to the helm of Loewe. Creative business consultant Julie Gilhart will also be a juror. Formerly Barneys New York’s fashion director, Gilhart led the store’s team of buyers and later helped launch the inaugural LVMH Prize for Emerging Talent.

Alongside will be Victoria Beckham, the celebrity founder and creative director who launched her eponymous womenswear line in 2008, and grew it into a global brand. Another entrepreneur who will be joining the panel is Edison Chen, the actor and rapper turned entrepreneur and creative director, who broke into the fashion industry when he founded Hong Kong-based sneaker boutique and streetwear brand Clot.

This year’s finalists and the ultimate winner will also be selected by Uma Wang and Tasha Liu, two women who have firsthand expertise navigating and shaping Shanghai’s burgeoning fashion industry. Wang, founder and creative director of her now globally-recognised namesake brand has showcased her collections on runways in London, Shanghai and Paris.

“I remember the challenges I faced in starting my label a decade ago as a Chinese designer,” Wang tells BoF. “Seeing new talents emerge in the Chinese market, I hope designers take this opportunity and the platform provided by BoF to show the world what China has to offer.”

According to Tasha Liu, “what’s more important than breaking into the international market is doing so with the experience of professional and strategic mentorship, and there’s no better opportunity for designers to receive this than the BoF China Prize.” Liu, who founded Labelhood, has helped bring rising stars from Angel Chen to Shushu/Tong onto the global stage.

Susanna Lau, the acclaimed London-based fashion journalist behind the Style Bubble blog will bring her expertise for spotting design talent to the panel.

The timing of the BoF China Prize competition in 2019 is important as it will mark the five-year anniversary of the launch of BoF China, the Chinese-language edition of The Business of Fashion known locally as BoF 时装商业 评论. The integration of Shanghai Fashion Week, BoF China’s strategic partner, is also key. Having built the commercial ecosystem around China’s leading fashion week, Lv Xiaolei, vice secretary general of Shanghai Fahion Week, will serve as special advisor to the BoF China Prize.

Eligible applicants must be a Chinese national or passport holder (including Macau, Hong Kong and Taiwan) and have produced at least two (but no more than 10) unique ready-to-wear collections; have secured prominent retail distribution (e-commerce and/or physical store channels) with successful sell-through; and must not be a brand focused exclusively on bridal or accessories or childrenswear. Applications are open from November 1, 2018 to January 31, 2019.