Where should fashion’s cohort of free agent designers land? BoF pairs the industry’s top creative talent with houses in need of a creative jolt.

Where should fashion’s cohort of free agent designers land? BoF pairs the industry’s top creative talent with houses in need of a creative jolt.

There is no quieter period on the fashion calendar than mid-August, when many in the industry retreat to their favourite Instagram-worthy getaway spots. And there is nothing like a proper holiday to let the mind wander — and dream.

From Karl Lagerfeld at Chanel and Marc Jacobs at Louis Vuitton to Phoebe Philo at Céline, Hedi Slimane at Saint Laurent and Alessandro Michele at Gucci, the right match between a creative director and a house can be transformational. And in the spirit of fantasy football drafts, the team at BoF has indulged in a bit of late-summer speculation of our own on which major brands would be the best match for fashion’s current crop of tenured free agents and fast-rising rookies.

The troubled, storied fashion house may have just hired Olivier Lapidus with the ostensible goal of remaking it as a “French Michael Kors,” but a far better outcome would be for Lanvin’s owner Shaw-Lan Wang to sell to a buyer willing to bring back the much-loved Alber Elbaz, who defined the brand’s DNA as we know it. Wang has rejected offers to sell Lanvin in the past, although the current state of the business — revenue was down 23 percent in 2016, with net losses amounting roughly $21 million — might finally change her mind.

It’s not such a far-flung idea, especially as Elbaz may still own at least 10 percent of the company, according to reports. But if he’s not interested or if Wang continues to get in the way, London-based designers Erdem Moralioglu and Simone Rocha could work. Both have the romantic sensibility, as well as singular points of view, to move Lanvin forward while paying respect to the foundation Elbaz so beautifully laid.

While Karl Lagerfeld’s roots are as firmly planted as ever in the house he so successfully rebooted in the early 1980s, rumours of who will inevitably succeed him continue to swirl. For years, Hedi Slimane was at the top of the list. Slimane, like Lagerfeld, is an expert stylist, and his storytelling ability would serve the house well. But if Slimane is Lagerfeld’s heir apparent, Phoebe Philo is certainly Coco Chanel’s.

The designer has managed to revive not one, but two female-founded houses — Céline and Chloé — thanks to her uncanny knack for knowing what women want to wear long before they know themselves. At Chloé, she took a tiny business and grew it into a formidable mid-size player. At Céline, she put a mid-size business on track to become a billion-dollar juggernaut. Now she is ready for the big leagues at fashion’s most storied house. At Chanel, she’d have the opportunity to usher a multi-billion dollar brand into its next phase of growth.

It’s a far greater challenge, though. Perhaps that’s why those in the know are now suggesting that Chanel studio director Virginie Viard — the woman currently responsible for executing Karl Lagerfeld’s vision — may be the house’s actual choice, in the same way that Alessandro Michele, a previously unknown internal candidate, succeeded Frida Giannini at Gucci. There’s a built-in trust between Viard and the secretive billionaire Wertheimer family, which owns Chanel. But bringing on Philo could create a phenomenon, as both Lagerfeld and Gabrielle Chanel once did. Lagerfeld’s not going anywhere yet, of course. As he often says, he has a lifelong contract.

When the time comes, there is no one better positioned to assume creative duties at the house of Armani than fellow Italian Stefano Pilati, who’s not only a skilled tailor — as evidenced during his time at Yves Saint Laurent and then Zegna — but is also genuinely plugged into youth culture. It could give Armani, which has struggled in recent years to update its brand identity, a much-needed boost. Like Mr Armani himself, Pilati is a notoriously challenging designer to work with, but his talent and vision are undeniable.

If Pilati prefers to continue to experiment independently — he recently released the first glimpse of a new venture via Instagram — Simon Porte Jacquemus, whose naive take on construction and suiting has pleased critics and consumers alike, could be an interesting if left-field choice.

While many presumed that Riccardo Tisci’s exit from Givenchy meant he would inevitably be joining Donatella Versace at the brand founded by her brother Gianni, talks between the two parties have reportedly come to a standstill and are unlikely to come to fruition. It’s more likely that Donatella, known for spotting — and collaborating with — new talent including Christopher Kane, Jonathan Anderson and Anthony Vaccarello, will find a young designer to groom for the Versace throne.

Perhaps Kane could return to the fold. Joseph Altuzarra, whose business, unlike Kane’s, is only minority-owned by Kering, would also be an interesting choice; he knows what’s sexy. But we’re hoping Donatella surprises us all by naming an inspired, unexpected heir.

Current financial woes aside, Jenna Lyons’ high-energy aesthetic transformed J.Crew from a ho-hum catalogue business into a globally influential fashion brand. Ralph Lauren would benefit greatly from a stylist who could catapult the multi-dimensional world built by its namesake founder into a different stratosphere. In January 2017, the company hired former Calvin Klein brand steward Kevin Carrigan as its creative director, but evidence of his impact has yet to materialise. Lyons could really dial things up. Altuzarra, one New York designer who understands the importance of storytelling around a collection, is another option.

If Philo isn’t meant to land at Chanel, she is a natural fit for the leather goods maker, which tends to rotate creative directors in and out a bit more slowly than most. Philo could not only bring more attention to ready-to-wear, which has long played second fiddle to the bags and shoes, she could also rev up the heat on the core accessories business. Imagine an iconic Hermès bag reimagined by Philo? You wouldn’t have to think too hard; there’s something in some of Céline’s classic handbag shapes that bring to mind Hermès. If that doesn’t work, then one could also imagine bringing back secretive Belgian legend Martin Margiela, who helmed the house for six years, beginning in 1997. It may be a long shot… but one can only dream.

JAB reportedly starts sale process for Bally. The group is continuing to offload its luxury portfolio after it sold Jimmy Choo to Michael Kors Holdings Ltd for about $1.2 billion last month. It is asking potential suitors for indicative bids by mid-September, according to people with knowledge of the matter. It is thought the sale of Bally International AG could fetch at least €600 million.

Coach Inc shares fall after Kate Spade acquisition. The accessible luxury group gave a weaker-than-expected annual forecast, following efforts to pull the Kate Spade brand from department stores. It caused shares to fall by as much as 14 percent, the most in four-and-a-half years. Coach acquired Kate Spade in July for $2.4 billion, aiming to appeal to more millennials. But the company must face some short-term pain as it works to decrease Kate Spade’s reliance on flash sales and the troubled department store channel.

Tiffany & Co. wins trademark infringement case against Costco. A federal judge ordered the warehouse chain to pay at least $19.4 million in damages after it illegally sold 2,500 counterfeit diamond rings bearing the Tiffany & Co. name. Costco aims to appeal, arguing “Tiffany” has become a generic, stand-alone term. The lawsuit was a bid to protect the Tiffany & Co. brand and cachet as one of the world’s best-known luxury retailers.

Prospective buyers circle Matchesfashion.com. Apax Partners, KKR and Permira are all expected to place bids for the luxury retailer, with Bain Capital also mulling a bid, according to new reports. A sale could value Matchesfashion.com at more than £600 million (about $775 million), and co-chairmen Tom and Ruth Chapman could enjoy a windfall of over £300 million by selling the company they founded as a single shop in Wimbledon 30 years ago this year. In March, the company released its financial results for the first time, revealing 61 percent year-on-year growth to £204 million in 2016. The news comes as Avenue 32, another online retailer, is reportedly set to shut down after failing to acquire new customers.

Victoria’s Secret owner plunges on weak forecast. Shares of L Brands Inc. fell by as much as 10 percent after a disappointing profit forecast. With shoppers shifting towards cheaper brands and foregoing the mall altogether, the company lowered its forecast to 25 to 30 cents in the third quarter. Analysts had been looking for 36 cents on average. Sales at Victoria’s Secret also fell by 14 percent in the last quarter, a sign that efforts to connect with younger customers are failing to to pay off.

Canada Goose launches knitwear. It is the first time the brand has diversified from its core outerwear product, and represents a critical new avenue of expansion for the company, which went public in March of this year at a valuation of CAD $2.3 billion ($1.72 billion). While its goose down parkas retail for around $1,000 apiece, the knitwear will start from $295, allowing the brand to explore a new entry-level price point. 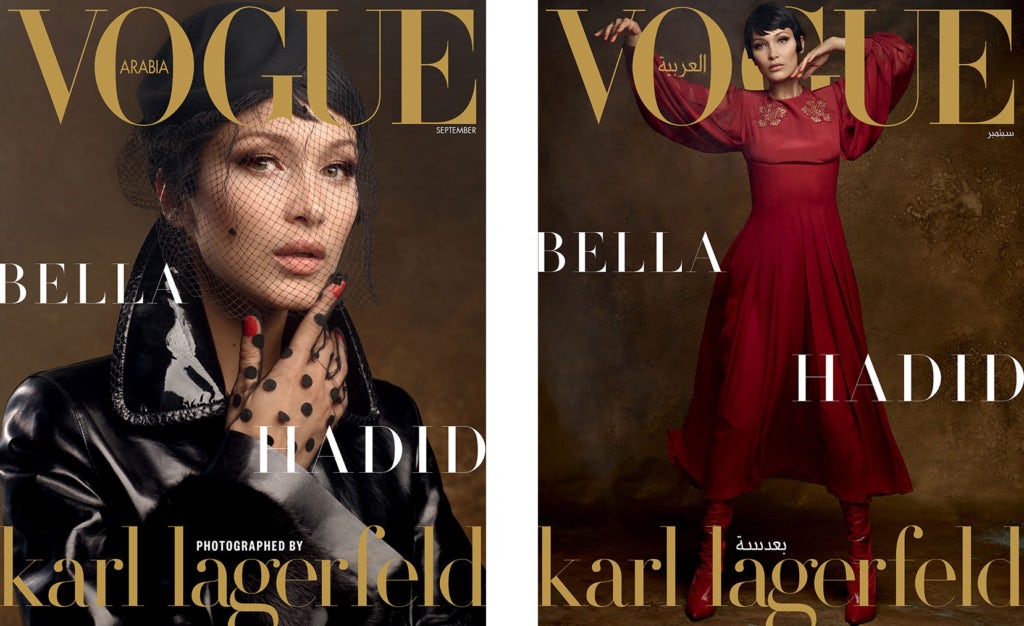 Bella Hadid covers Vogue Arabia. The Palestinian-American supermodel was shot by Karl Lagerfeld for edition’s first September issue wearing a series of head-to-toe Fendi looks. She is the second Hadid to cover the title — her sister Gigi appeared on the publication’s debut issue in March. This is editor-in-chief Manuel Arnaut’s fifth issue of Vogue Arabia; he succeeded launch editor Deena Aljuhani Abdulaziz in April when she was abruptly fired after just two issues.

Under Armour CEO resigns from Trump’s American Manufacturing Council. Following widespread disapproval of the President’s response to recent violent protests against white supremacist gatherings in Charlottesville, Virgina, Kevin Plank stepped down from one of several executive panels assembled in January by Trump to discuss job growth. Plank’s resignation came on the same day as that of Kenneth Frazier, chief executive of pharmaceutical company Merck & Co. Trump later announced on Twitter that he was disbanding the Council entirely when it became clear that he was about to lose all council members.

Vogue partners with Google on VR video series. Building on the popularity of Vogue’s 73 Questions videos, "Supermodel Closets" offers a glimpse inside the wardrobes of industry stars including Kendall Jenner and Cindy Crawford. The viewer can look around the full 360 degrees of the video with Google Pixel phone’s Daydream View VR headset or Google Cardboard. The partnership is just one element of Google’s fashion strategy, which includes digitising the world’s fashion archives.

Amazon launches instant pickup. Amazon Prime members in five US cities can pick up items at Amazon locations within two minutes of ordering them online. The feature marks the company’s latest effort to grow its presence in physical stores. Amazon has also expanded its returns policy to third-party sellers, making marketplace merchants subject to Amazon’s own protocol, sparking concerns that the move will hurt small businesses.

Facebook circumvents ban in China with new app. The photo-sharing app called Colourful Balloons imitates the look and function of Facebook’s Moments app without carrying the Facebook name. Registered to a Beijing address, the app links users through social media network WeChat. The move comes as global tech companies are trying to break into the Chinese 700-million user market after government-imposed internet censorship.