MARSEILLE, France — Simon Porte Jacquemus likes his things in threes, at least when it comes to the curation of his Instagram feed, where the French designer shares frequent photo trilogies with his 540,000 followers. Sometimes the playful images come in the form of short narratives, but more often the set includes three corresponding pictures of his childhood, his travels or one of the many magazine covers featuring his feminine garments.

“It’s stronger and more beautiful this way,” explains the 28-year old designer, who showed the first collection of his namesake label in 2013.

One of his most recent sequences depicts Toulouse rugby player Yoann Maestri undressed on a cliffside in the south of France, accompanied by a large white dog photographed by Jacquemus himself. The masculine Maestri stands out among the sea of female muses who flood Jacquemus’ social media page. The images are in line with the designer’s next step: the launch of a fully-fledged menswear line, which Jacquemus announced at the end of his Autumn/Winter 2018 womenswear presentation in February.

Tonight the designer will unveil the collection, “Gadjo,” on the beach of a national park just outside of Marseille.

The setting is fitting. Gadjo is a Roma expression meaning a man who belongs to no community. The slang used by the southern French also translates to "boy." 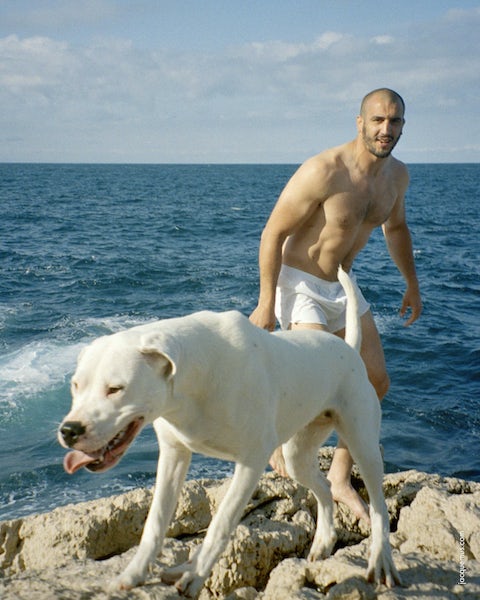 “It’s the much younger brother of the Jacquemus woman,” the designer says. Where his women are strong and sexy yet sophisticated, his boys are maturing and have a more athletic sensibility to their way of dressing, which is manifested through their colourful silk tracksuits, soccer T-shirts, sporty knitwear and bare feet.

“I was really obsessed by the different guys in Marseille and how they’re so fashionable with their blue tracksuits, blue hats, blue wallets and gold chains. Everything is very precise without them knowing they’re fashionable,” explains Jacquemus. “I want to transform sports icons for ready-to-wear and push the idea of sportswear a bit more.”

The naivety and mischievousness of his menswear is reminiscent of characteristics of Jacquemus himself, who in the early days of founding his label — named after the maiden name of his late mother Valérie — would attract attention from French television, while staging fake protests with a group of the designer’s female friends acting as models outside Vogue’s Fashion Night Out.

With his only fashion experience being a sales clerk at the Comme des Garçons store in Paris, it was a way for the self-taught designer to be recognised by the then-traditionalist and closed French fashion system. In 2012, he became one of the youngest designers to ever show on the official Paris Fashion Week schedule. In 2015 he won the Special LVMH Prize, granting him with €100,000 (about $117,000) in prize money and a year of mentorship.

It was a turning point for the designer whose early day surrealist, deconstructed design language — heralded for its optimistic, child-like spirit — quickly evolved into one that was more toned down and wearable, appealing to fans like Rihanna, Emily Ratajkowski and Solange Knowles.

The shift paid off. Revenue reached upwards of €9 million (about $10.5 million) last year, almost doubling the prior year. The label has 230 stockists worldwide and over 40 employees in its Paris studio. 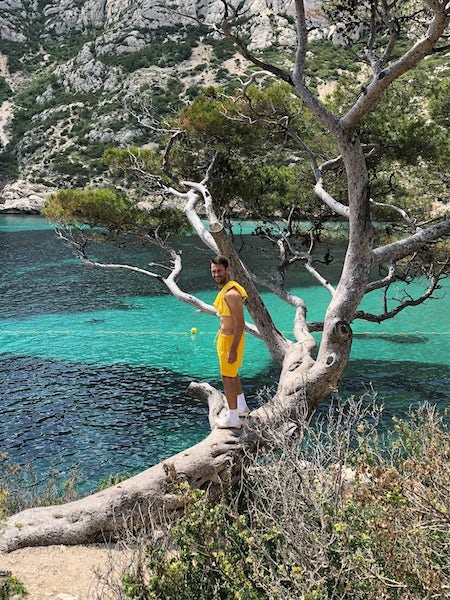 SImon Porte Jacquemus at the location of his debut men's show | Souce: Courtesy

“Simon is a very unique designer whose collections stand out thanks to his innovative approach to classic silhouettes and his use of interesting fabrications,” says Elizabeth von der Goltz, global buying director at Net-a-Porter, which has increased its buy of the brand by 50 percent for Autumn/Winter 2018 compared to the season before. “Offering high level of design at contemporary price-points makes the brand feel accessible.”

As Jacquemus has never taken outside investment there has not been outside pressure to venture into menswear in order to grow sales. But with his women’s line seeing steady expansion — helped by the designer’s signature cotton and linen shirt dresses, and a recent push into accessories as well as a new e-commerce site launched earlier this month — the timing felt right to expand into men’s, Jacquemus explains.

And for his menswear to be successful in the long-term, competitive pricing will be key, argues Jacquemus, who says shirts will retail for around €250 (about $290) — significantly lower than the average price of the brand’s women’s shirting at €400 (about $465). “The idea for the women’s strategy was to have a strong brand image with a very accessible price, [but] men’s is a different market, it’s more minimal [and] less sophisticated,” he says.

So, what’s next for the designer?

With Jacquemus remaining one of the buzziest emerging designer names out there, his name has been frequently mentioned by industry insiders in the past as a contender for the creative director role at fashion houses, including Céline before the appointment of Hedi Slimane.

But while some of his peers have joined big French luxury houses — Demna Gvasalia at Balenciaga and more recently Virgil Abloh at Louis Vuitton — Jacquemus says he is fine where he is.

“Freedom is important for any business and you have to realise when you’re happy and I’m so happy,” he says. “It’s like I told Anna Wintour: I already have my big house which is Jacquemus.”

A New Life in Paris