LONDON, United Kingdom — On the evening of December 5th, a vast, floodlit red carpet will transport many of the global fashion world’s most high-wattage figures up the grand staircase of London’s Royal Albert Hall to The Fashion Awards 2016, a newly christened annual awards event organised by the British Fashion Council (BFC), in partnership with Swarovski.

Formerly known as the British Fashion Awards, the revamped event will have a new global focus, with awards honouring international talent from both the creative and business sides of the industry, and a bigger public audience. The BFC also plans to broadcast the event internationally. And, for the first time, the Awards will have an additional sense of purpose: raising money to support fashion education in the UK through the BFC Fashion Education foundation.

"We aspire to create an event that is like a mix of the Academy Awards and the Met Ball, on a global scale," Dame Natalie Massenet, chairman of the BFC, told BoF in an exclusive interview at the Royal Albert Hall. “It’s going to be the most sweeping, beautiful, magical, sparkly, twinkly, elegant red carpet you’ve ever seen.”

Indeed, while previous BFC awards events took place at the London Coliseum and, before that, at the Savoy Hotel, the move to the Royal Albert Hall, one of London’s most iconic performing arts venues, signals the scale of Massenet’s ambition for the annual event, which has already been transformed under her watch into a key moment on the global fashion calendar, attracting attendees from around the world, including bigwigs from European conglomerates including LVMH, Kering and OTB.

The new venue will also enable the Awards to admit a larger public audience. Last year, the sold-out London Coliseum event hosted over 2,000 guests; this year, the Royal Albert Hall will host just over 3,000 attendees, and half of these seats will be available for purchase by the general public, starting Tuesday 3 May. 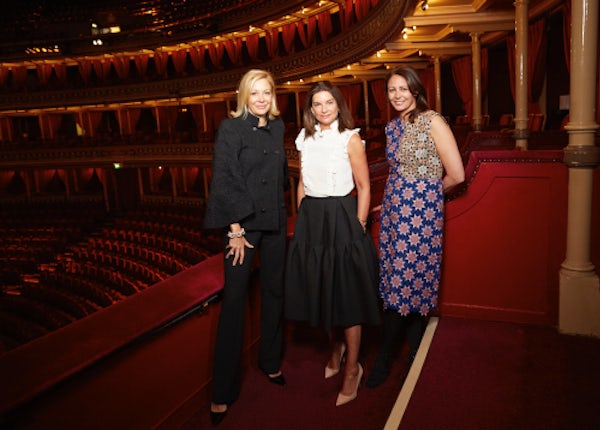 “The special thing about this event is that it’s also open to the public for purchasing of tickets,” said Nadja Swarovski, member of the executive board of Swarovski. Since joining the crystal company in 1995, Nadja Swarovski has increased its ties to the fashion industry, through jewellery collaborations with designers like Karl Lagerfeld and Christopher Kane and sponsorship of events including the British Fashion Awards and the CFDA Awards. “This very special location really allows us to increase the viewership but still maintain the intimacy,” she said.

The revamped awards ceremony is also expected to have broader global television and online video coverage. Last year, the BFC partnered with E! Entertainment to distribute the event in the US and Europe. “We’ll probably still do an element of that, but we want explore other channels that make sure we get a broader international reach,” said Caroline Rush, chief executive officer of the BFC, adding that “it definitely won’t be live, so it won’t be one of those awful stop-starts — we’re now going to an intermission break, please disappear and do whatever — because that would just ruin it.”

In recent years, the live audience has witnessed moments including John Galliano presenting a lifetime achievement award to Anna Wintour, in his first public appearance after being ousted from Christian Dior; Alessandro Michele’s acceptance speech for the international designer award 2015, presented by BoF's very own Tim Blanks; and on-stage tributes to Nick Knight, Karl Lagerfeld and Edward Enninful, the latter of whom received his award on stage from Naomi Campbell and Rihanna.

“We’re all aware that we have to tread very carefully to make sure that we’re not just playing for the cameras, but that we’re doing something that is authentic to the industry,” said Massenet. Asked whether widespread public interest in fashion events as a cultural and entertainment spectacle was a new phenomenon, she added, “It’s definitely not new, because at every awards ceremony, 99.9 percent of the coverage is about what people are wearing.”

The awards themselves will also change, with the aim of staging “a rounded event that celebrates everybody” in the industry, said Rush. “Of course, we will still be looking at it as celebrating British talent, but there will definitely be more celebration of international talent,” she said. “There will be celebration of business, and we’d like there to be a celebration of sustainable business as well.”

An increased international focus may also result in a more diverse spread of winners — both the British Fashion Awards and the CFDA Fashion Awards have faced criticism for honouring the same handful of names each year. While one major prize, the British Style Award, will be awarded based on a public vote, the rest of the winners will be chosen by the BFC’s international judging panel of over 800 industry figures.

Importantly, the revamped Fashion Awards will also serve as a fundraiser, with the ambition of raising £10 million in the next ten years for education scholarships to help the best talent attend leading fashion colleges. Proceeds will go to the BFC’s Education Foundation, a registered UK charity, which supports young people aged between 12 and 24.

“It’s not just an awards ceremony, but also an opportunity for the corporates, the fashion industry, to know that their attendance is not just about celebrating each other but that part of the money there will start going to feeding this fantastic virtuous cycle, which is to put money back into education, get kids into the education programmes celebrating creativity, craftsmanship, skills,” explained Massenet.

“I think it’s demonstrating such an amazing paradigm shift where you can be purposeful but also make the event very entertaining and beautiful,” added Swarovski.

The urgent need for more support in UK fashion education was first highlighted by Sarah Mower, co-president of the BFC’s education initiative who, four years ago, warned Massenet that the industry had a “potential crisis on its hands.” While British talent is visible in the ateliers of major fashion houses around the world, the cost of education in the UK, along with cuts in government funding for creative education, had Mower concerned that “people like an Alexander McQueen, who had a scholarship to go to school, will not emerge and that that we will lose some of the diversity, some of the left-field thinking, the anti-establishment that the fashion industry craves and needs,” Massenet recalled.

Select students will also be invited to attend the ceremony. “Bringing those students in so they can actually access and be part of an industry that they’re aspiring to have a career in, is a great opportunity as well,” said Rush.

The idea of a fashion awards that is “a mix of the Academy Awards and the Met Ball, on a global scale” is a grand ambition and Massenet admits that establishing an event — and a fundraiser — like this won’t happen overnight. “You have to walk before you can run,” she said, adding that for the awards to succeed the initiative will require support from brands, department stores and influential industry figures like Anna Wintour, whom Massenet says as been “an enormous supporter” thus far.

Tickets for The Fashion Awards will be on sale from the 3 May at: www.fashionawards.com/tickets