NEW YORK, United States — In his acceptance speech at the CFDA Awards this past June, Womenswear Designer of the Year Raf Simons thanked many people, including his friends and family and his Calvin Klein colleagues. He even thanked (CFDA chairman) Diane von Furstenberg. But in the end, he also thanked “women.” Just, "women." Full stop.

Coincidence or not, "Women" happens to be the name of Calvin Klein's latest fragrance, its first new perfume pillar in 13 years and the first to be designed in collaboration with Simons, who joined the PVH-owned brand as its chief creative officer in August 2016. The campaign, photographed by the designer’s long-time friend, visual artist Anne Collier, features actors Lupita Nyong'o and Saoirse Ronan, whose technicolour portraits are dealt out alongside black-and-white images of women who “inspired and influenced” them. (Nyong'o cited Eartha Kitt and Katharine Hepburn; Ronan chose Sissy Spacek and Nina Simone.) 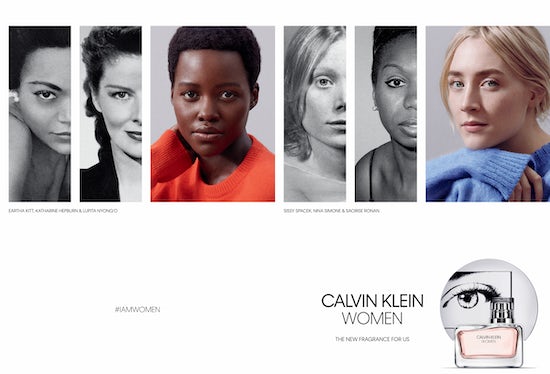 With a suite of fragrances that includes of some of the most recognisable in history — CK, Eternity and Obsession — proposing an entirely new concept may have been Simons’ greatest challenge since embarking on the revamp of the Calvin Klein brand image.

Ready-to-wear and advertising came first in order to set the tone, and then an upgrade of the mass-market denim collection, which relaunches in earnest this autumn. But Simons says he has been thinking about what to do with fragrance from day one, and with good reason. While Calvin Klein's overall retail revenue reached $9.1 billion globally in 2017, a significant portion of that is fragrance sales, of which PVH earns fees from its licensing agreement with Coty. The Calvin Klein business generated $226.4 million in royalties overall in 2017. The fragrance business is the second largest license behind G-III, which produces the Calvin Klein women's apparel (except for jeans and underwear) sold at department stores like Macy's.

“Immediately when I arrived, I looked closely at the various fragrances in the portfolio because it was important for me to continue the stories they captured, which were all iconic and meaningful moments,” Simons told BoF. “It became clear very early on that we should create a new fragrance and a new chapter to the story.”

But Harvey Nichols will only maintain that exclusive for one month. A critical initiative for both Calvin Klein and its fragrance partner Coty, the ambitions for Calvin Klein Women are sweeping. “Calvin Klein is the biggest fragrance brand in the world,” said Edgar Huber, president of Coty Luxury, the division of the beauty conglomerate that serves as the fragrance partner for designer brands including Burberry, Marc Jacobs and Chloé.

While net sales of the Calvin Klein suite of fragrances, which include CK One, Eternity, Euphoria and Obsessed, are slightly up year-on-year, Huber, who joined Coty in 2015 from Land’s End, wants to capitalise on the current positive energy around the brand. (Sales at Calvin Klein were nearly $3.5 billion in 2017, a 10 percent increase from the year before.) The approach is not dissimilar to that of Gucci Bloom, the hit fragrance designed and launched in partnership with the Italian house’s creative director, Alessandro Michele.

“With Gucci Bloom, there was a lot of innovation in the marketing mix,” said Simona Cattaneo, chief marketing officer of Coty Luxury, who joined from Burberry in 2016 where she ran the company’s in-house beauty division before it was outsourced to Coty. “We’re reaching all touch points with the customer."

Starting August 15, Calvin Klein Women will be distributed en masse across the UK, US, Germany and at travel retailers. Next up is France and Canada on August 21, Italy and Spain on September 1 and Asia in mid-September. Major retail partners include Macys.com in the US and Flaconi in Germany, although there will be a sales push on direct channels as well.

The democratic approach is also echoed in the pricing: the recommended retail price for Calvin Klein Women starts at $65 for a 30 ml bottle, $84 for 50 ml and $102 for 100 ml. What’s different here, the Coty team says, is the complexity of the fragrance, fine tuned to hold up against niche players like Byredo and Le Labo, which are filching market share from the designer segment. “Our innovation is in the quality of the juice,” Huber said of the fragrance composition, described as a woody floral with notes of orange flower and lemon pepper. “It’s a sophisticated scent, and that’s how we integrated the phenomena of [niche fragrance].”

Designer fragrance certainly remains a tenet of the industry, and a force at Coty, where luxury is performing better than the struggling consumer beauty division — which includes mass-market drugstore brands including Covergirl — and even the “professional division,” comprised of salon favourites such as OPI and Wella. In the quarter ending March 31, 2018, sales at Coty luxury were $752.5 million, up 12 percent year-over-year on a constant currency basis, credited in part to strong performance from Gucci Bloom, Tiffany & Co.’s namesake fragrance as well as CK One and Chloé Nomade. 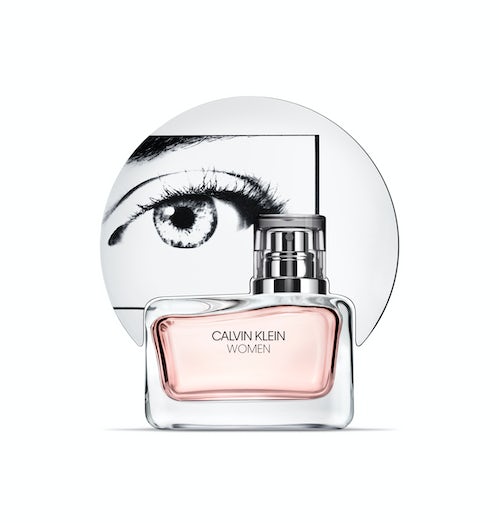 "Companies like Coty and Puig keep investing in designer fragrances,” said Clotilde Drapé, an analyst at Euromonitor International. “It’s just matter of changing the perception around the product. The new releases will be more targeted, a little bit more edgy.”

To be sure, Calvin Klein has never shied away from edgy. While Obsession and Eternity’s marketing was overtly sexual in a heteronormative sense, CK One — a unisex fragrance introduced in 1994 — addressed “gender fluidity” long before that term was a mainstay of the cultural lexicon. Calvin Klein Women, it seems, is a different sort of meditation on gender.

“Women was born out of the desire to celebrate both the plurality as well as the individuality of femininity today,” Simons said. “It's a message of unity and inspired strength. I am immensely proud of everyone who contributed to and gave voice to this project.”

Perhaps that’s why the packaging — a shapely vessel conceived by perfume bottle designer Suzanne Dalton in partnership with Collier — is more cerebral than flashy. (The disk-shaped cap is printed with one of Collier’s images of a wide-open eye.) Simons and Collier — who typically comments on commercial work rather than making it herself — partnered with Lloyd & Co. on the advertising, which will include video to help spark a “digital conversation,” although more specific details on the communication plans remain unknown.