Style.com is launching a shoppable campaign to better demonstrate its content-commerce proposition and carve out a clear brand identity.

Style.com is launching a shoppable campaign to better demonstrate its content-commerce proposition and carve out a clear brand identity.

LONDON, United Kingdom — In 2015, Condé Nast first revealed its plans to transform Style.com into a global e-commerce player. In a crowded luxury e-commerce space, the company saw its competitive advantage in its ability to integrate content and commerce, harvesting the purchase intent generated by its glossy media titles with a seamless path between inspiration and transaction.

Almost two years later, Style.com’s UK site is up and running and allows users to shop directly from editorial content, using what the company calls its “shopping layer.” But the venture, which has yet to launch in the US, is facing several challenges, not least the difficulty of matching up the wide range of content being produced by Condé Nast’s media brands with the site’s actual product offering, which remains noticeably limited compared to competitors.

What's more, competitors like Net-a-Porter and Matchesfashion.com build their editorial offering around their buys, seamlessly aligning content and commerce. But the editorial independence and multiplicity of Condé Nast’s media portfolio, plus the fact that Style.com largely operates a marketplace model, buying and holding only limited inventory, makes such coordination near impossible. 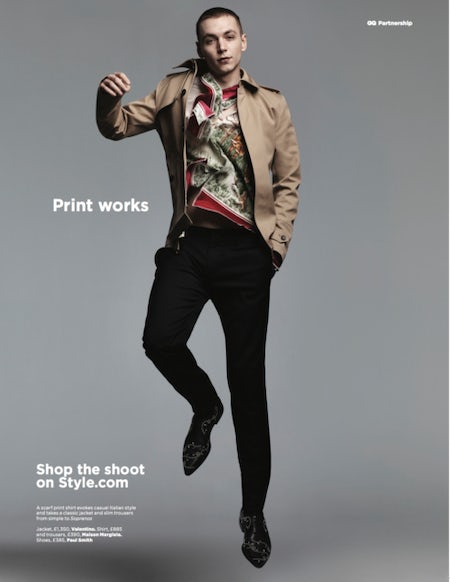 The new Style.com campaign which will appear in GQ | Source: Courtesy

Timing is another issue. “When you look at a fashion magazine, a lot of the products that are presented in magazines are not available at the time the magazine hits the newsstands because it shows what the trend will be, what the styles will be. So the coverage between what’s in the magazine and what’s on Style.com…” acknowledged Franck Zayan, president of Style.com.

Now, Style.com has partnered with Spring Studios to create seamlessly shoppable fashion stories featuring items sold on the site that will appear in the May print editions of British Vogue and GQ, as well as on their respective websites. The stories — which are technically advertising and dubbed The Style.com/Vogue Edit and The Style.com/GQ Edit — are set to become monthly features and will also appear as digital banners. Brands featured for May include Chloé, Marni, Valentino, Dolce & Gabbana, Isabel Marant, Martin Margiela and Raf Simons.

The initiative is designed to demonstrate the value of Style.com’s content-commerce proposition. “It’s a demonstration of what Style.com is,” said Robin Derrick, executive creative director of Spring Studios, who served as creative director on the stories. “This may be an interim solution, but it’s a rendezvous, a regular in Vogue and GQ, which is shoppable on Style.com.”

But the project is also about driving overall awareness for Style.com, more clearly carving out its brand positioning and planting the venture more firmly within what Derrick called “the Condé Nast ecosystem.”

“It’s a campaign. It’s a visibility thing,” explained Derrick, noting that Style.com’s transformation from editorial site to e-commerce player had created confusion in the market. “The role of Style.com is that it should be the home of styling — to give it a kind of editorial positioning rather than it’s just the Condé Nast e-commerce platform,” he continued. “It’s the edit, the curation of product, it’s the way the clothes are presented and styled by the stylists of those recognised magazines. The idea was to use the language of Vogue — it’s Craig McDean, it’s Lexi Boling, it’s Sam McKnight, it’s Val Garland, it’s Kate Phelan, so really a very recognisable Vogue shoot,” he said, referring to the women’s story. “We know that we’re not the only game in town.”

This drives home one of our key differentiators... Yes, we are Condé Nast, we are close to Condé Nast.

“This drives home one of our key differentiators,” said Zayan. “Content, editorial — and the authority of the Condé Nast is a really important part of that. It really conveys the message that, yes, we are Condé Nast, we are close to Condé Nast.”

But will this be enough to buoy the fortunes of a site that is relatively new to the market, but trailing significantly behind industry leaders like Net-a-Porter and Farfetch? According to data from SimilarWeb, a digital market intelligence service whose data is imperfect but directionally accurate, the average duration of a visit to Style.com is only 1 minute and 36 seconds, compared to 5 minutes and 11 seconds for Net-a-Porter and 4 minutes and 21 for Farfetch. Style.com’s average pages views per visit are just 1.92, compared to 6.80 for Net-a-Porter and 5.10 for Farfetch.

And what of Style.com’s US launch, which was originally scheduled for early 2016?

“We are committed to launching the US, we will launch the US, we are working to that this year, but at the same time working on improving the shopping layer,” said Zayan. “We’ve also invested a lot of resources on personalised recommendations. So on the roadmap, there are a lot of things. One of those things, obviously, is the US launch, but it sits along with a lot of other pieces.”

Is the New Style.com Working?

What's Going On at Condé Nast?