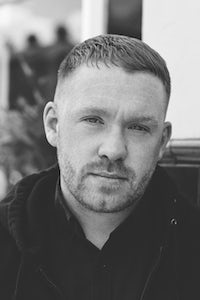 LONDON, United Kingdom — Craig Green owns five t-shirts, two pairs of jeans and a jacket. It’s one of his own, a quilted, lace-tied worker’s jacket in indigo cotton that he based on the black jean jacket he’d been wearing every day up till that point. It’s all he needs, really, when his sturdy worker’s frame wears it so well. It’s always reassuring when a menswear designer looks good in his own clothes, even more so when those clothes pose a challenge to the sartorial status quo, as Green’s often have. But since his first show for Spring/Summer 2015, he’s been able to successfully insinuate his design signatures into London’s fashion lexicon, to the point where you can see Craig’s Children being born in the next generation of talent coming through. That influence was recognised in May, when Green scooped £150,000 from the BFC/GQ Designer Menswear Fund.

“We’ll have a table this season, we won’t have to sit on boxes.” That’s what his tiny team cried plaintively on news of his win. They’ll find out whether that’s the case when the money comes through in September. Before then, there’s Green’s show for Spring 2017, the highlight of the opening day of London Collections: Men. But first, the designer has to finish it.

I thought last season’s collection had echoes of North Africa in its desert tones and nomad stripes. They’re more explicit for Spring 2017. Hand-blocked prints in bleached-out pastel tones are borrowed, says Green, from old Moroccan bed sheets. “I wanted to go back to colour and print. We did it a lot at the beginning with all those hand-painted pieces, but not since then. Last season was faded, aged and washed. It was an older energy. So this time, we started with acidic, really saturated colour. But then we decided we didn’t like that, so we bleached everything out, going for a more romantic feeling. Then it all shrank, so we had to make it all again. We’re never really finished ‘till the last minute.” And that everything-changing-by-the-second chaos is, according to the designer, pretty par for the pre-show course in the Green atelier. “We’re never really finished to the last minute, we tend to make a lot of samples,” he adds drolly. 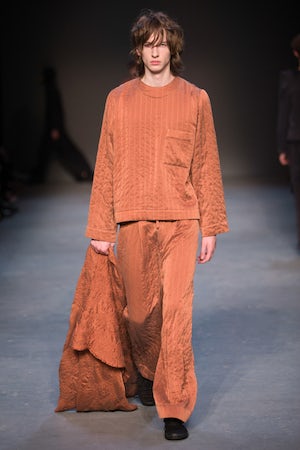 It’s something of a tradition for iconoclastic talents to announce themselves with their degree shows. Green’s MA presentation set a fearless precedent with three-dimensional forms that turned men into mobile sculptures. Since then, his collections have consistently evoked pagan robes, priestly vestments, warriors, wicker men and workers from a medieval future. But he himself never tried to define his own aesthetic until he applied for the BFC/GQ Fashion Fund. “We had to sit down and really work out what the brand was about. Why do we have shows like this? Why do we have products like this?” The whole procedure was compounded by the fact that Green is working with a music producer for the first time on his new show. Frederic Sanchez being the industry’s go-to guy for soundtracks that often provoke, occasionally bemuse, and always transcend mere music for models to walk to, this is quite a coup for Green, but he had no idea who Sanchez was when he started e-mailing three years ago. Now, working with him, Green finds once again that he has had to define himself, to help Sanchez create one of the complementary aural profiles for which he is famous.

So, was there definition forthcoming?

“I don’t know if we ever managed to,” he admits. And he’s aware that at some point, he’ll need to. “We’re about to come to end of the Newgen sponsorship and the studio sponsorship from [the Alexander McQueen foundation] Sarabande, so in the next year or so, we’re going to have put down roots to last a bit longer. There’s only so many favours and freebies people are going to do now, especially when they know we have the GQ money.” There’s a little rue mixed into the pride when Green adds, “We have no investment, no credit cards, no overdraft and no backers.”

But he has, at least, been able to nail the physical nature of his business. “One side is creative, the other side is uniforms and workwear. And sometimes, they’re fighting.” The creative side is theatrical, clearly responsible for the shows, and the sculptural pieces that end up in exhibitions, and gigs like the recent costuming exercise for Ridley Scott’s Prometheus sequel. (“We did all the sleeperwear and the clothes the mercenaries wear to fight the alien,” says Green.) The other side, the uniforms, hang in shops like Selfridges, Dover Street Market, Barneys, L’Eclaireur, 10 Corso Como, and Opening Ceremony, where women are drawn to them almost as often as men. That gender-neutrality might indicate something significant about the conceptual essence of Green’s clothes: strong but romantic, functional but emotional, the warrior’s edge tempered by an air of melancholy.

During LC:M a year ago, Nick Knight and Green collaborated on a photo shoot for the windows of Dover Street Market. The clothes reminded Knight of the torn sails of a ship after being ravaged by a storm, an almost classically romantic vision. “Craig didn’t pick up on that, he thought it too whimsical. He saw it in a much more brutal way,” says Knight. As brutal, in fact, as the images he brought Knight of rugby players crashing into each other. Green’s presentations have been serenely, markedly anything but brutal, but Knight’s images proved that his clothes look best in visceral movement, when all the ties and trailing laces and artful articulation come alive. So we could mark the tension between serenity and violence as another Green signature. 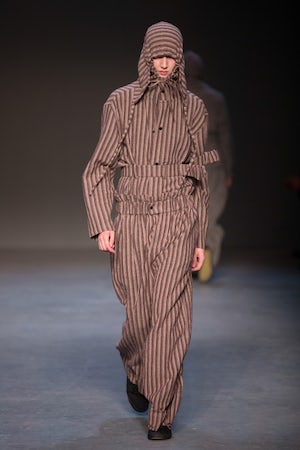 Something else I find more striking is the essential innocence of his work. It’s a measure of the man who arrived at Central St Martin’s in 2007 having never picked up a fashion magazine, having never heard of Alexander McQueen (so Frederic Sanchez needn’t feel so bad). “It just wasn’t in my realm of knowledge. I’d never even heard of St Martin’s. I quite liked doing art at school and I had this dream of going to do a fine art course in Edinburgh to be a portrait painter. I had a friend at school whose dad was a propmaker for the BBC who told me I had to apply to St Martin’s because it was the best art school in England, so I said I’d come along to an open day with him. I applied, because I thought at least I could do a foundation year, then I met some people outside smoking who said I should come and do fashion communication. ‘We just dress people up for two weeks and take photos.’ I thought that sounded like fun. Then I tried print-making, because it was somewhere between painting and fashion. My idea of fashion was so narrow I was really rubbish at it, and I thought at least I could go into art afterwards. It was really naïve the way it happened.”

At the end of his second year, Green discovered the designers Walter van Beirendonck, Bernhard Willhelm and Henrik Vibskov, and his horizons suddenly expanded exponentially.

“In my placement year, I spent six months with Walter, six months with Henrik, and my whole idea of what fashion could be changed. I saw how everything was a possibility, how everything and anything could be related to fashion. I saw how you could do it as an independent.” It’s not hard to imagine Professor Louise Wilson recognising a budding kindred spirit and impelling him onto her legendary MA course, the farm team of contemporary British fashion.

Commercial success or brand-building or even dressing men was never in Green’s mind. “I think my graduate show was just about creating objects. I was more interested in making something visual, what I would want to see walking around in a catwalk show. It was a really simple idea.” And the media played merry hell with it, as they did for Green’s subsequent efforts under the umbrella of the Lulu Kennedy-curated MAN presentation at LC:M, the “broken fence” collection of Autumn/Winter 2013 occasioning particular mirth. Now, he says, “My favourite shows are those old Galliano shows for Dior. They make me feel emotional. When I watch them, I wish I was there. That dreamy escapism is what we’ve always tried to start with, but you have to have a realism too. Because as soon as you start doing it, the reality kicks in that if you don’t sell, you don’t have money to do the next show.”

Still, even as Green talks about the need to make “product that people want to be buy,” broken fences now a thing of the past, the idealism of his early years in fashion remains unpolluted. “I love the community feeling of what I do. I love [that] I can work with my best friends, I don’t dread going into work, and that’s an amazing thing.” His epiphany, personal and professional, may have been his Spring/Summer 2015 collection, where he proved he could do what he wanted, still make a primal emotional connection with hundreds, maybe even thousands, of other people…and launch a business on the back of that connection. At the time, I wrote, “Zen was one of Green’s own reference points, but the mind spiralled away effortlessly into visions of samurais and gurus and barefooted penitents and the Polyphonic Spree and even, for one bedazzled brainiac in the audience, the Children’s Crusade.” Me being the ‘bedazzled brainiac,’ you can take that googly-eyed observation with a snort of sal volatile, but I was scarcely the only person in the audience who was profoundly moved. More to the point, retailers backed up their emotional response with orders. “That collection, we had sales for the first time,” says Green. “Suddenly, we became a business, rather than ‘Let’s do a show and see what happens because maybe we won’t be here in six months.’” Almost the most satisfying of all possible results, in other words.

And that’s the rail that Craig Green rides now, anticipating anticipation. The designer whose entire wardrobe could fit in a carry-on metamorphs those pieces into clothes that tug at the heartstrings, tickle the soul. Because his particular brand of alchemical pragmatism has already carved him an undeniable niche, there will surely be a moment when someone or thing much bigger comes knocking at the door, wanting to capture his lightning in their bottle.

Are Mixed Gender Shows the End of Men’s Fashion Weeks?