NEW YORK, United States – When customers click on Il Makiage’s website, they won’t be greeted by the usual splashy images of the latest products. Instead, they’ll see a single photo of a man or woman — often highlighted and matte-lipped to the extreme — with an option to “skip” or “heart” underneath. It’s akin to a dating app, with more contouring.

Each photo subject is an influencer, mostly personalities with “micro” followings, like @keamonef, a New York fashion blogger with 12,000 followers, though bigger names are in the mix as well, including Bretman Rock, an influencer based in Hawaii who is closing in on 14 million followers. In each case, the creator offers a tutorial about how to create their look. And they get up to a 25 percent cut from any sales their content drives.

Oran Holtzman, chief executive of Il Makiage, said his brand switched to the “Tinder” approach in July because the old model of beauty e-commerce — the glossy images of products and models — wasn’t working. About 90 percent of American teenagers still prefer to buy cosmetics in stores, according to Piper Jaffray, which is a key demographic for the brand. Many retailers, from Sephora and Ulta Beauty to Nordstrom and Shopbop, have affiliate programs.

“This whole mess is generating less than 10 percent of beauty purchases,” Holtzman said about online shopping. “In a store, a makeup artist is asking you, ‘What do you want?’ … I’m asking you, without questions, ‘What do you like?’” 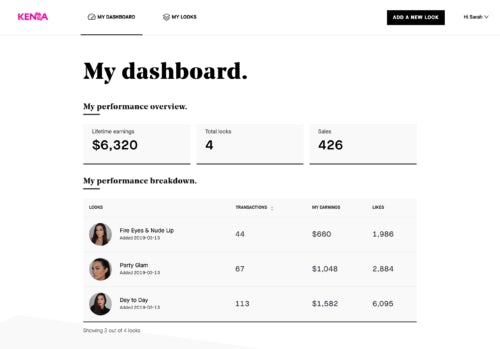 Influencer's can see their earnings and performance on a dashboard | Source: Courtesy

Il Makiage’s commission system is known in retail as an affiliate model. It’s a time-tested way to incentivise loyal customers to push product, harnessing the power of word-of-mouth as an alternative to traditional forms of marketing. Glossier introduced its ambassador programme three years ago, and since then commission fees and referral programs have proliferated, particularly among digital-native brands looking for an alternative sales channel to wholesalers like Sephora and Ulta Beauty.

It’s still rare for a brand to lean so heavily on affiliate sellers, as Il Makiage has. However, it’s a logical next step for the industry, as brands rely on user-generated content to get the word out about their products. Customers see makeup tutorials and Instagram posts as more “real” than marketing images, and are therefore more open to making a purchase, said Conor Begley, co-founder and president of analytics firm Tribe Dynamics.

If you have great content, someone will purchase items from your looks so you will get paid.

Begley said influencers with 25,000 fans or fewer prioritise building credibility and their expertise; sponsored content has yet to completely take over their feeds.

“To get it [recommendations] from somebody who’s got 20,000 or 50,000 fans you just trust it a little bit more than a random user,” Begley said. “[There’s] some level of authority, which gives it some extra oomph.”

But it’s still risky to base an entire business model around the hope that influencers will sell your product. There have been some runaway successes — Jaclyn Hill is often credited with re-energising Becca’s cosmetics business by selling millions of dollars worth of highlighters — but not all brands and retailers have found that influencers’ are as good at converting as they are at racking up “likes” and video views. An individual who works closely with a beauty brand said a partnership with a top influencer earlier this year yielded disappointing sales of several hundred dollars.

“Working with influencers gives them [brands] real authentic reviews, delivered to many different audiences,” Eriksen said. “Our followers appreciate our work and they know when we really do love the products we use.”

Il Makiage has had several incarnations since Holtzman relaunched the 47-year-old label in 2013 with his sister Shiran Holtzman Erel. In 2017, a $34 million investment from L Catterton went largely towards building the current technology, responsible for the vast majority of the US business. Il Makiage is on track to generate more than $50 million in sales this year, according to the brand.

“If you have great content, someone will purchase items from your looks so you will get paid. Content is the king in this mechanism," he added. Also, a "try before you buy" option where consumers can get four full size products for free - they only pay if they decide to keep - is designed to convert e-commerce holdouts.

You have to use social as an amplifier of good brand behaviour.

For Il Makiage, it’s a group of 200 influencers with follower counts ranging from about 25,000 to 200,000. They have created about 500 tutorials for the brand’s website. Some mega-influencers who have previously used the line’s makeup in their content are included as well.

Holtzman said he wants to keep the number of influencer partners “in the hundreds.”

At Glossier, the rep programme is driven by word of mouth, and makes up a small percentage of overall revenue. The amount of ambassadors has doubled from about 500 to over 1,000 since 2017. The brand also has a customer referral initiative that gives “reward credits” to consumers who drive sales, which can be put toward future Glossier purchases. Guidelines specify that participants in the programme can only refer “friends and family members.”

“You have to use social as an amplifier of good brand behaviour,” said Klein. “Look who’s on Glossier’s homepage – it’s real-life people. Those people are getting this incredible social love and attention from the brand and that makes everyone feel like they can be part of it.”

Balmain has a new makeup collaboration. With none other than Kylie Jenner, who will sell the product on her Kylie Cosmetics e-commerce site starting today.

Avon heads to court. Two former employees are accusing the brand of discriminating against them after they became pregnant.

Beauty was “experimental” at the Emmy Awards. Some attendees opted for bolder looks, such as blue eyeshadow or pink hair.

A new beauty ideal is fuelling “Instagram Face.” Influencers and Kylie Jenner have been credited with driving an influx of cheap “non-surgical” cosmetic procedures.

Ingredient origin stories sell skincare. From sake to snail mucin, origin stories about hero ingredients could be a powerful differentiator for consumers.

Beauty’s getting into gaming. MAC Cosmetics is the first beauty brand to exhibit at TwitchCon, Twitch.tv’s annual videogame convention.