PARIS, France — The thing that is quintessentially Isabel Marant about the company’s corporate offices, wedged into a quiet area of the city just east of Palais Royal and south of the Bourse, is not the industrial skylights or the berber rugs, but the Ubald Klug sofas. Tubular, black and entirely comfortable, they’re easy to sink into, not unlike the designer’s “Hellea” slides, which regularly sell-out at stores during the warm summer months.

Indeed, for many years, a great part of the allure of Isabel Marant was that it wasn’t that easy to find, especially outside of France. The company only began selling its wares online in 2011, long after many of its competitors.

But in July 2016, a new injection of capital from Paris-based private equity firm Montefiore, which took a 51 percent stake in the business, came with new plans to accelerate growth. "We were reaching a size of business where we needed to have some partners to help us drive," Marant says of the decision to seek outside funds. "Now I can be 100 percent focused on creativity, developing my idea of the woman and the silhouette."

So on June 21, more than two decades after the designer launched her namesake label in 1994, Isabel Marant finally went live with its own global e-commerce site in partnership with Yoox Net-A-Porter Group.

The e-commerce launch, Isabel Marant’s first major move since the Montefiore deal, will be followed by a slow roll out of new physical stores. The brand currently has 25 physical boutiques — 10 directly owned, 15 through regional partners — the latest of which opened in Miami, and plans to open 15 more stores in the next five years. While the next opening has not yet been announced, the company is eyeing Europe, as well as China, where it currently has one store in Shanghai through a licensing agreement. (Currently, direct retail makes up just 15 percent of the business, a number the label aims to raise to 30 percent).

It’s an indication of the measured way in which Marant and co-founders Nathalie Chemouny and CEO Sophie Duruflé were planning to grow the business when they took on Montefiore as a partner one year ago. Today, Duruflé and deputy CEO Anouck Duranteau-Loeper are working towards a goal of hitting €250 million (about $285 million at current exchange) in annual sales in the next five years.

“Sophie and Isabel made the decision [to take investment], but they didn’t need to,” says Duranteau-Loeper, who joined the company from Paco Rabanne after leading the leather-goods business at Céline and working on strategy at LVMH. “The company was profitable for a long period of time. They took the time to choose exactly what they wanted. It wasn’t an emergency where you need backing because you need to pay the bills.”

“I love the brand because I think it’s very special in that it’s very Parisienne and very fashionable — in the sense that Parisienne brands can be very fashionable versus American brands that are more merchandised. But at the same time, it's more real and more relevant to an everyday girl and an everyday life,” Duranteau-Loeper says of her attraction to the company. “The way [Marant] works is to design for women in their life, not as a fantasy of something. I’m a down-to-earth person and that makes sense to me. To spend hours working for something that means a lot to many people, not just for a fashion crowd.”

I think it is important and necessary for her brand to evolve.

“We built this business very spontaneously... organically... without any business experience,” Duruflé adds. “We need to be more strategic and proactive in the work we are doing today, and Anouck is really helpful with that.”

Isabel Marant also sits at a unique place in the fashion market. “You have big luxury groups, you have small, cool designers and then you have big merchandising companies,” Duranteau-Loeper notes. “We are a different type of thing. We are bigger than most of those small designers. The challenge is to find a way to grow that business.”

Their targets do not seem out of reach, given that sales were upward of €150 million ($170 million) in 2016. The size of the business speaks to Marant’s potential and influence as an arbiter of French-girl cool. Her takes on the mannish herringbone-wool oversize blazer, hippie embroidered denim and the street-ready wedge-heel sneaker made her the lead exporter of Parisienne style in the 2000s and early 2010s, when Duruflé first began widening the label’s presence abroad.

Marant’s elevated spin on grey jersey — the humble material that helped to define Gabrielle “Coco” Chanel’s career as well — transformed sweats from back-drawer pieces into front-and-centre staples for millions of women, whether they bought the label’s version or a high-street knock off.

Then, in November 2013, Marant collaborated with H&M on a collection that was so successful, the Swedish retailer called it out during an earnings report for its outsize role in beating sales estimates for the month of the drop. (Same-store sales increased 21 percent year-over-year; original analyst projections were 14 percent.)

But while Isabel Marant grew an average 30 percent year-over-year in its first two decades in business, Duranteau-Loeper and Duruflé acknowledge that growth has slowed in the past year. And while the executives say that numbers are accelerating once again, maintaining momentum is likely to remain a challenge.

One significant factor is the widespread co-opting of the Isabel Marant look: consistently relaxed and a bit mussed up to convey Parisienne je ne sais quoi, with frequent nods to rockabilly and bohemian aesthetics. The competition is coming not only from fast fashion players, but also from lower-priced contemporary collections that are sometimes sold on the very same racks in department stores and multibrand boutiques. With competition from everyone from specialty retailers like Madewell to Paris-based labels like Sézane and Rouje, as well as the Los Angeles-based Dôen or the New York-based Ulla Johnson, Marant’s dominance is by no means absolute any longer. 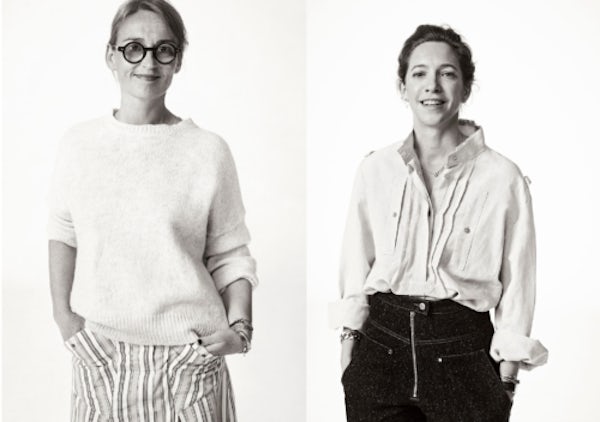 There are certain retailers so loyal to the brand and the business it has brought to them that they are careful about how it is merchandised. “I choose not to carry a lot of brands I come across, even if they are cheaper, precisely because I think they offer a lesser version of what Isabel Marant is already doing,” says Jennifer Mankins, owner of Bird, a bicoastal multibrand boutique that has carried the designer’s wares since 2006. “At the same time, I think it is important and necessary for her brand to evolve, but not at the expense of losing touch with her core customers and what they want.”

“One reaction is to move away from what you were doing because you were copied, and you do something else to prove that you are fashion forward," Duranteau-Loeper concedes. "But then you see that people are taking your territory. We’ve been experiencing that."

For a while, Marant began pushing further into high-fashion territory with its main collection, alienating some of its clients along the way. Mankins, for one, stopped carrying the main collection in its stores in 2017, although all five of her brick-and-mortar outposts are stocked with Étoile, which remains a top-ten brand — sometimes top-five, depending on the month — for the company.

“The sales of the main collection are not as strong for us as they are for Étoile, and I feel there has been a real push to differentiate the two collections with main line focusing more on runway and editorial styles. The price point and the designs are less accessible and we felt it had become too much of an investment into inventory that didn't sell as well as we would like,” Mankins says. “That being said, there are always amazing fabrics and styles in the main collection that I love and we will continue to re-evaluate each season.”

To win back accounts like Bird, the duo says that Marant has refocused her energy. “For the past two seasons, we’re back to something where she feels very right,” Duranteau-Loeper says, with Duruflé adding: “There is more creativity. They will come back to us.”

"I have been doing this for more than 20 years and throughout those years I believe I have created a silhouette; a lot of women tell me that their Isabel Marant’s pieces are like old friends that make them feel more confident," Marant adds. "That is my creative vision: make women feel powerful and happy because they have clothes they like, that make them look beautiful but natural."

Duranteau-Loeper and Duruflé are also delving into new categories, the first being handbags, which arrived in stores this season. The label has already had great success with shoes, most notably its “Dicker” ankle boot, “Hellea” slide and the now-infamous “Beckett” high-top wedge sneaker, which was copied the world over. While the Beckett remains part of the core collection, distribution is limited to certain retailers and markets.

“They were quite a big surprise for us, and also a big step because it was very challenging for the organisation in terms of production and logistics,” Duruflé says. “I was also very careful, because lot of customers wanted to have them. We didn’t want to become a sneaker brand. It became a choice.”

“We are not an item-driven business; we sell a lot of products to a lot of different girls,” adds Duranteau-Loeper. “And that’s what makes the brand potential very strong.”

Handbags, of course, run the same risk: a top hit can help rev up growth, but it can also render a brand ubiquitous. “The lifetime of a bag is different than clothing,” says Duranteau-Loeper, who would like the category split to normalise at 60 percent apparel, 40 percent accessories. “It takes time to establish a bag and consistency throughout the seasons. Sometimes, when you have a really strong designer base, you feel like you have to get another message out every season. When you do bags, it’s about creating something longer term.”

Fragrance is another area of interest, although the label is still seeking a partner. “It’s a long commitment, and you need to be aligned on the strategy: Do you want to be in 5,000 doors or 1,500 doors? It’s a different approach and a different product,” Duranteau-Loeper says. “We would love to do it, but we need to find the right alignment.”

To be sure, pulling these traditional levers will help the Isabel Marant brand become a bigger business. But in order for it to regain its influence, Duranteau-Loeper and Duruflé will need to continue to drill down to the essence of what Isabel Marant means to consumers. The power of a company run by women, for women, is not lost on them.

“It’s a girl gang,” Duranteau-Loeper says. “I really believe that Isabel, Sophie and Nathalie have built something that is very modern. The accessibility and reality-check is relevant in everything they do. People don’t want marketing spam, they want product that makes them feel good every day. The long term sincerity and honesty is very important.”

Marant's final word? "I believe that we will be stronger together."

Isabel Marant Says Build a Strong Base and Stay Focused