Here, on Europe’s busiest shopping thoroughfare, consumers have their pick of retailers, including the luxury department store Selfridges towards Marble Arch to the west; two four-storey Primarks, one at either end of the street; NikeTown and Topshop’s crown jewel at Oxford Circus; three Zara stores and two Uniqlos. H&M closed one of its two Oxford Street stores in August for a major refurbishment.

But Oxford Street is not immune to the challenges facing high streets across Britain: rents are down, while vacancies are up. Once-mighty, mid-market department stores like House of Fraser and Debenhams are bereft of shoppers. And tourist shops hawking Prince Harry mugs are popping up, while fast-fashion giants like Inditex SA’s Zara downsize. Turnover was flat at just over £5 billion ($6.03 billion) on the street last year. Only Selfridges, the experience-led luxury department store, is driving record-breaking sales, buoyed by its concession model, curation of new brands and heavy investment in refurbishing its Oxford Street flagship.

Then, there’s the significant delays to the planned “Crossrail” or Elizabeth Line, a high-speed train that was expected to funnel millions of people to the Oxford Street area each year. The £17.6 billion project, originally set to launch in 2018, won’t open to passengers until 2021, by current estimates, but retailers are still hoping the line will add £3.5 billion in yearly spending to the area by 2023.

“Oxford Street is having a hard time right now,” says Marie Hickey, director of commercial research at Savills, a global real estate agency. But Hickey is optimistic: “I don’t think it’s going to be a continuous issue.”

Presently, 8.3 percent of units on Oxford Street are empty or filled with souvenir shops with short-term leases, only slightly below the national town centre vacancy rate, which hit 10.3 percent in July, its highest level in four years. Rents meanwhile are down from £1000 per square foot for prime locations on the west side of Oxford Street, where international brands congregate around Selfridges to £915. (On the east side of the street, closer to Tottenham Court Road, where lower-priced, domestic brands tend to set up shop, rents are stable at £700 per square foot).

The street is exposed to several factors plaguing the British high street more generally. A third of spending on Oxford Street comes from British shoppers, who are in the doldrums with the UK’s October 31 Brexit deadline weighing on consumer confidence.

Right now, with all the macro changes and the physical changes that need to happen, it is the perfect storm.

Equally worrying: many retailers have been slow to catch-up with the shift online and face rising costs. Take UK business rates, a property tax based on the rental value of any non-residential building including shops: it climbed 80 percent on average per retailer last year, according to the 600-strong retailers represented by the New West End Company, a London-based advocacy group.

Even Zara, a global megabrand with international exposure and thousands of outlets, has closed a store on Oxford Street, recognising it needs fewer, more effective, more experiential flagships while investing heavily in its e-commerce offering. The cost of digitising, coupled with the collapse in UK retail sales, which, in August, plunged at the fastest pace since 2008, according to a Confederation of British Industry survey, has resulted in the collapse of names like LK Bennett. Others like Topshop-owner Arcadia have risked failure by betting landlords would take rent reductions over the prospect of empty units if the distressed retailer were to collapse.

“Right now, with all the macro changes and the physical changes that need to happen, it is the perfect storm. Just trying to drive profit right now is really challenging and, if you take a 5-year view, we’re going to be in a very different place with over £10 billion a year [in total sales for the West End]. In a two-year view, it’s going to continue to be challenging,” said Jace Tyrell, chief executive officer of the New West End Company. (Last year, sales in the West End reached £9.1 billion.)

Landlords are taking steps to buoy Oxford Street with more curated, mixed-use spaces and additional food and leisure activities. When possible, they are also re-purposing stores for fast-growing direct-to-consumer brands. 2018 was a peak for new, international brands coming to London with 26 fashion brands opening their first ever store in the capital, according to Savills. But many of those are seeking smaller units than the 3-storey flagship spaces available on Oxford Street. 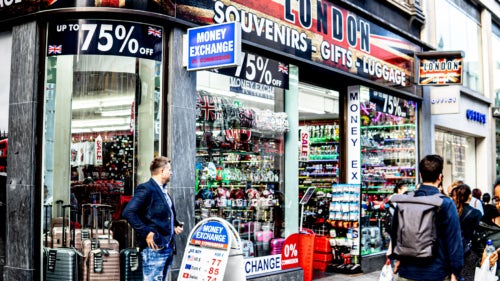 Property owners may need to be more flexible on rents and terms to attract better tenants. Single landlords, the vast majority of Oxford Street, are harder to deal with, said Jonathan De Mello, director of retail at property advisors Harper Dennis Hobbs, which works with brands like Benetton, Uniqlo and Clarks. “They are getting better because they have to,” he said of the street’s landlords. “I’ve never seen it go down this much. The bigger landlords have been more progressive.” Rent-free periods and contributions of up to 20 percent of store fits and marketing costs are common, he added.

We’re a global brand with over 4500 stores around the world, but Oxford Street is one of our most iconic locations.

Food and leisure, though offering a lower return on investment than retail due to higher fit-out costs, can boost dwell time. Fitness concepts like Soul Cycle, Equinox and Peloton, the boutique cycle fitness showrooms, are all opening new stores in London. But for the 100-plus individual landlords on Oxford Street, like many high streets across the UK, it’s difficult to sacrifice higher rent for a more curated street. Many prefer a short-term lease to a gift shop willing to pay a bigger figure.

Reviving Marble Arch at the western end of Oxford Street which “has remained relatively inaccessible, untouched and under-utilised,” according to Simon Loomes, strategic projects director at landlord The Portman Estate, could be a huge boon for the area. “It has all the elements which create a great public space: a famous national monument, good transport links, pedestrian space; and it connects London’s finest park (Hyde Park) to the West End,” he said, declining to comment further on the plan.

According to Moritz Garlich, head of expansion for H&M UK & Ireland, the fashion giant’s Oxford Circus flagship is one of its most important stores in the world. High footfall and resulting brand visibility remain key to the area’s lure. The Swedish fast-fashion giant is currently refurbishing its second store at 179 Oxford Street, which will reopen next year. “Having such a strong presence on Oxford Street is of real importance to us when it comes to brand recognition and gives us access to a highly diverse customer base,” said Garlich. “We’re a global brand with over 4500 stores around the world, but Oxford Street is one of our most iconic locations.”

For Primark, which eschews online, its two Oxford Street stores remain among the best performing of its global outlets, alongside central Madrid and its Milan Arese stores. “We have always wanted a vibrant retail environment around us, certainly on Oxford Street you’re not just going to one store. A thriving high street is in our favour, so I’d like to see an improvement,” said Finance Director John Bason.

Crossrail will “massively change the volumes” of shoppers on Oxford Street and was a driving factor for opening near Tottenham Court Road station, he continued. “I’m a firm believer that the high street is not terminal; it’s going through quite a big change here and it’s where it goes and settles over the next five years that’s important.”

Some argue government controls need to evolve to make it easier for retail units to meet the changing needs of shoppers. Tesla, the electric car manufacturer, abandoned its Oxford Street store two years ago when it failed to get planning permission to expand into a showroom. It is a widely repeated story by property agents, who shake their heads at the limited view taken by local councils of what constitutes a shop. Westminster City Council, the local government body which oversees Oxford Street, has outlined plans to support improved retail and leisure experiences “that responds to innovation and change in the sector, including the transformation of the Oxford Street District.” The plan is, however, still in draft phase.