LONDON, United Kingdom — Sfumato, an Italian term meaning “to evaporate like smoke,” is an oil painting technique pioneered by Leonardo Da Vinci, in which the artist blends one tone into another to blur the outlines of an image. Today, the style is present in the Meisterstück Sfumato, a leather goods range that includes business bags, laptop cases, belts and small leather accessories. One could easily assume that this is a collection by an Italian luxury accessories house. In fact, it is the latest offering from Montblanc, the German manufacturer of upmarket fountain pens.

In recent years, fashion brands such as Christian Lacroix, Paul Smith and Lanvin have dabbled in stationery, offering notebooks, pens and cardholders alongside their fashion lines. But now, luxury stationery brands like Montblanc, which is part of the Richemont group, are crossing over into fashion accessories.

In 2014, Milan-based notebook company Moleskine introduced its first collection of wallets, passport holders, messenger bags, backpacks and briefcases. Named ‘myCloud,’ the collection’s tagline is “Created for our mobile lifestyle. Inspired by the digital cloud. Made for the moving world.” At Smythson, a British manufacturer of luxury stationery and diaries founded in 1887, change was ushered in by Samantha Cameron, wife of UK Prime Minister David Cameron. During Cameron’s tenure as creative director, which ended in 2010, Smythson launched fashion accessories including $3,000 python-skin handbags and collaborated with British designers including Jonathan Saunders, Erdem and Holly Fulton.

Why are stationery specialists turning to fashion accessories?

“It’s our way to get the flavour of the season,” said Xavier Rougeaux, chief commercial officer at Smythson. “We’re not a trend follower but we believe that it’s important to create newness. A couple of seasons ago, we collaborated with British illustrator Quentin Jones. We wanted to offer our core customers something that was more seasonal, so they could get a fashion take on our otherwise classic products. It’s important for us to work with fashion designers and artists who give us that flair of the season.” 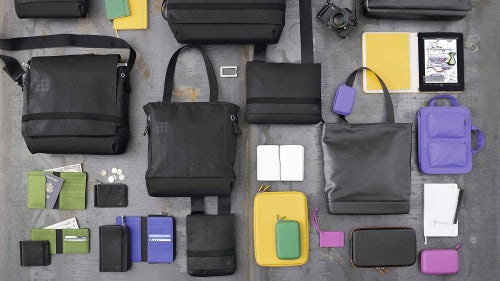 “We are a lifestyle brand, or as we prefer to call it, ‘mindstyle.’ Our approach is to equip our customers with a set of tools. We are simply creating things that we think are interesting for our customers,” said Maria Sebregondi, co-founder of Moleskine.

“After writing instruments, we went into leather goods, naturally, as a form of protection for the writing instruments,” said Jérôme Lambert, chief executive of Montblanc. According to Lambert, the move was an effort to expand the company’s product offering, rather than a direct attempt to target the fashion consumer.

Indeed, even without extensions into fashion, stationery sales at these companies are healthy. In 2014, Moleskine's paper collections (which include notebooks, diaries, journals and digital notebooks) made up the majority of the company's sales. At Montblanc, writing instruments accounted for 45 percent of the company’s 2013 turnover of $830 million. Today, three main categories — writing instruments, leather goods and watches — represent 90 percent of its overall business, explained Lambert.

For Montblanc and Moleskine, extensions into leather goods are a means of driving brand awareness. “It was part of the willingness of the company to be present at a global geographical level,” said Lambert, speaking of Montblanc’s acquisition by Dunhill in 1977, which triggered its expansion beyond fine pens into luxury goods such as jewellery, bags, sunglasses, fragrance and watches. “Introducing new product categories at that time created an opportunity for Montblanc to increase its worldwide presence and platform.”

According to Lambert, customers would purchase leather goods from a stationery specialist like Montblanc “because it’s made in Italy, because of the quality of the leather, because of the quality of the construction. At Montblanc, we bring consistency across all our products. If you think about it, we first developed leather in 1926. We opened our first store in 1990. The relationships with our clients have been established throughout time.” 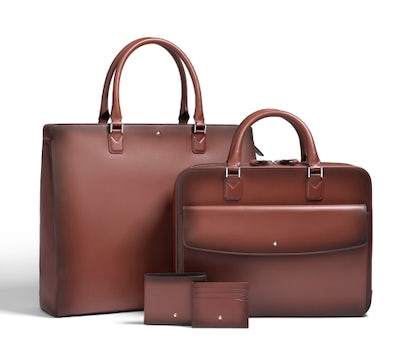 “We want to satisfy our core customers but we also want to reach new people,” said Sebregondi of Moleskine’s fashion product lines. “We’ve been trying to expand our product offering and distribution in department stores worldwide, such as Selfridges and Harrods, so that our presence is wider. But, wherever we are, the type of Moleskine customer remains the same: the kind of creative professional who is always looking for something that is inspiring.”

“All our new products complement the Moleskine notebook but they are also great designs in itself. The bags itself look good, especially our myCloud bag line, but the fabric is also more functional and has longer wear,” she added.

On the other hand, Smythson’s leather products — which have been part of the company’s offering for many years — outweigh its stationery business. “I think the perception that Smythson is mainly a stationer comes from the success of our diary and notebook business. You would be surprised to hear that almost 80 percent of our business today comes from leather goods,” said Rougeaux. “The very nature of fashion collaborations means that they’re treated like limited edition pieces, so we often sell out very quickly. Every time it has been a success.”

In 2013, Smythson’s cemented its links to fashion when it joined the official London Fashion Week schedule, alongside British fashion brands such as Preen, Mulberry and Margaret Howell. “It’s an opportunity we took because we thought it was important to showcase the brand, not only to our clients, but to present it in a more relevant way to the fashion industry,” said Rougeaux. “[Smythson] really deserves to be part of the British fashion week, because of who we are and because of the luxury of our products.”

Could full fashion lines be on the cards?

Not at Smythson, according to Rougeaux. “Innovation has always been very important for the brand and there are new categories we could expand into, but there are no plans for Smythson to expand into ready-to-wear,” he said. “It’s a matter of staying true to who we are and I think our clients appreciate that we’ve hardly changed over the years.”

Lambert agreed: “We don’t want to feel forced to extend further into fashion collections. At the moment we are more focused than ever on our three main categories.”

Moleskine’s Sebregondi, however, didn’t rule out the possibility: “There’s a lot to do and there are many opportunities. A Moleskine jacket one day — why not?”