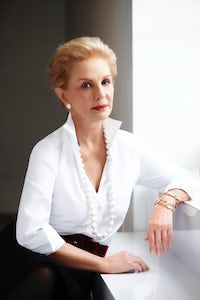 MADRID, Spain — “What do you think of the bloggers?” asks Carolina Herrera over lunch and a glass of red wine at the Hotel Ritz. A frequent fixture in the dining room during her trips to Madrid, she has kindly ordered for the table. On the menu is a bowl of vegetables swimming with tiny trumpet mushrooms, a dish that she has dubbed, “risotto without the rice.”

But Herrera is far more interested in talking about the evolution of social media than the contents of her plate. “When they appeared, the bloggers, everyone wanted them to shoot and pose,” she goes on. “Now, it’s a little different… It changed so much.”

Today, bloggers are more broadly referred to as “digital influencers,” a purposely-vague identifier that describes plenty of Herrera’s collaborators, including Olivia Palermo, known within the industry for driving significant sales conversion via her outfit photos. “Some of the others are as pretty as Olivia and as stylish, but they are not like her.”

Herrera should know the difference. She was the proto-influencer, inspiring and unofficially endorsing the designers she wore as a Venezuelan-born socialite living it up in 1970s New York. Those were the times when Halston, Oscar de la Renta and Bill Blass reigned. Then, in 1981 at the age of 42, she made what seemed like an impossible-to-achieve leap from muse to peer, launching her very own ready-to-wear collection.

Like today’s crop of influencers-turned-designers, more than a few critics — and plenty of her friends — dismissed her first efforts. “They said I was going to do it for a year or two and I was going to disappear,” she remembers. “I am so happy now because I proved them [wrong]. After 35 years, I am still here.”

Not only is Herrera still here, she has built a global business projected to generate $1.2 billion in retail sales in 2016, up 6 percent from the year previous, long ago outpacing the businesses of many of her contemporaries including Halston and Blass, as well as fellow socialites Carolyne Roehm and Jacqueline de Ribes, whose fashion brands were short lived. 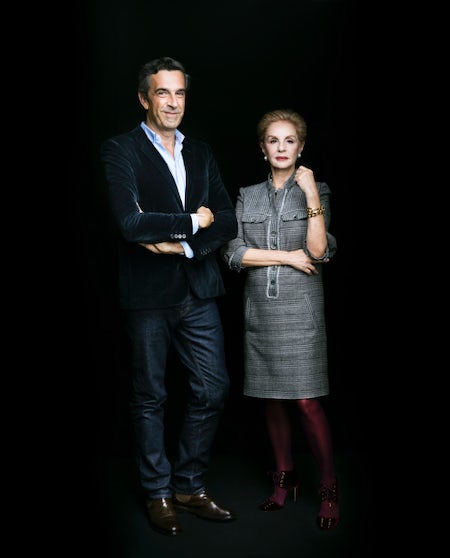 A key to Herrera’s staying power is her 28-year-long relationship with the privately-owned, family-run Puig, the 102-year-old Spanish firm with roots, and the majority of its business dealings, in fragrance. To put the weight of their partnership in perspective: Puig owns several fragrance licenses, including Prada, Valentino and Comme des Garçons. It also owns three fashion brands — Paco Rabanne, Nina Ricci and Jean Paul Gaultier — alongside Carolina Herrera. In 2015, the group’s annual sales were €1.6 billion. While the company will not comment on what percentage of revenue comes from Carolina Herrera alone, the brand’s retail sales indicate that it is a significant portion of the overall business.

“One of the things about the Carolina Herrera universe is that it is very consistent and loyal to what she represents. It’s not a marketing exercise, which is quite unique in the fashion world today,” says Puig’s chief brand officer, Jose Manuel Albesa. “Carolina, with her talents, has never followed, but has always done it [her] way. It doesn’t have to be Dior.”

Herrera first signed a licensing deal with the family-run Puig in 1988, backing out of another agreement already in the works after meeting second-generation heir Mariano Puig at a party held at her home. “Family businesses give me confidence,” Herrera says. “It’s very steady, how it should be. We have a lot of conversations and things to say to each other. Sometimes not so good, sometimes very good. Business is that way.”

But Puig’s business, for its first 80-some years in existence, was fragrance, not fashion. The two categories, while complementary, represent two completely different business models. Perfume is a high-margin, high-volume business that serves as a size-free, affordable entry point into a brand. Ready-to-wear, and in the case of Jean Paul Gaultier, couture, is at the tippy-top of the triangle, a low-volume, exclusive business with a more complex supply chain and margins that are often unreliable.

However, aspirational fashion, in many ways, is what sells the bottle of perfume, so it was no surprise that Puig’s interests began shifting. First in 1987, when it acquired the French fashion house Paco Rabanne, whose fragrance it had been producing since the late '60s. But it wasn’t until 1995 when Herrera’s investor, Venezuelan magnate José de Armas, was looking for an exit that Mariano made an offer for the house. Today, Puig owns 100 percent of both the Carolina Herrera fragrance and ready-to-wear businesses. Puig would not comment on what sort of contract it holds with Herrera, the woman, in regards to salary or royalties.

In 1995, Mariano shipped his son, current chief executive and chairman Marc Puig, off to New York to learn the business.

At first, tensions ran high. “I said, ‘Little Marcos, what do you know about fashion?’” Herrera recalls. “We didn’t talk to each other for six months.”

Eventually, though, Herrera and Puig’s mutual interests brought them together. Fragrance remains the dominant force, with 22 unique scents living under the Carolina Herrera moniker. (Herrera’s daughter and namesake, Carolina Herrera De Baez, has served as creative director of the fragrance category since 1996, and was instrumental in launching 212 in 1997, a perennial hit that has seen an increase in sales every year since its inception.)

The latest addition to the suite, Good Girl, launched just five months ago in select regions — including the Middle East, Russia and Latin America — and is already the top-selling fragrance in Spain, surpassing targets by 85 percent, according to the company. With a campaign shot by Mario Testino and starring Karlie Kloss, Good Girl has also done notably well in Poland and Israel, illustrating the global reach of the Herrera name.

And yet, the company has managed to leverage the brand beyond scent. Multi-category secondary line CH by Carolina Herrera, a collection launched in 2003 and produced through two licenses — including an eyewear agreement with De Rigo SpA and an apparel and accessories agreement with STL (Sociedad Textil Lonia) — generated $359 million in retail sales in 2015. It encompasses women’s, men’s, accessories, shoes and leather goods, with 146 standalone stores and 215 shop-in-shops in 38 countries.

In the US, the designer’s bridal business is often the entry point for new ready-to-wear customers. Designing the collection — which remains a “category leader” at major department stores including Saks Fifth Avenue, Bergdorf Goodman and Neiman Marcus — is what drives Herrera, who turned 77 this year, to keep going.

Known for her personal style and in particular, her way with a crisp white shirt, she says she doesn’t usually design for herself. “If you want to wear the whole thing, then it’s not successful,” she says. “You have to think of thousands of women who are willing to wear Herrera.” 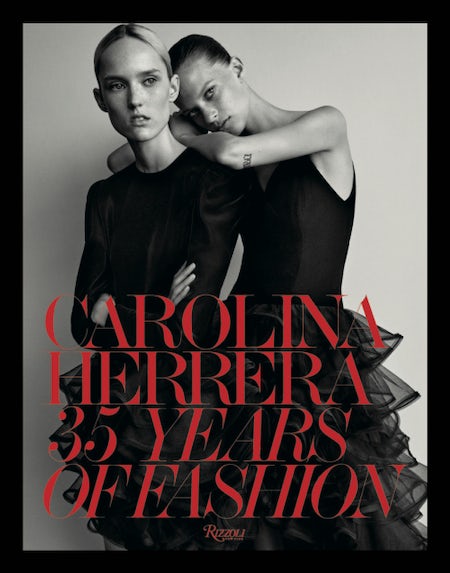 It was with those thousands of women in mind that Herrera — who has avoided publicly celebrating anniversaries and milestones in the past — was convinced to release a book, art-directed by Fabien Baron, in honor of her three-and-a-half-decade-long streak. Published by Rizzoli this fall, “Carolina Herrera: 35 Years of Fashion” features a selection of editorials as well as a portfolio of images capturing archive pieces in a new light. “Eighty-one dresses,” she says. “They look fabulous, and that’s exactly what I wanted.”

Herrera has been celebrating the anniversary throughout the year. Initially, with her first museum exhibition, which opened in May 2016 at the Savannah College of Art and Design and ran through October. This December, she’ll be honoured once again as the recipient of the Woman’s Leadership Award from the Lincoln Center Corporate Fund.

But today, she is in Madrid — the place her daughter Carolina now calls home — to celebrate the book with a party at the residence of the American ambassador to Spain and Andorra, James Costos, and his interior designer partner, Michael S. Smith, who famously decorated the private White House residence of the President and First Lady of the United States.

The party drew an elegantly dressed, lively mix of locals — including the famous Spanish model Eugenia Silva, actress Amaia Salamanca and Rafael de Medina, also known as the 20th Duke of Feria — in a space so crowded that many guests were standing dangerously close to the couple’s notable art collection, consisting of both owned and borrowed pieces from the likes of Ed Ruscha, Julie Mehretu and Ellsworth Kelly. As frothy Pisco cocktails were casually thrown back, Spanish chatter was dotted with English talk of the election results.

It was inevitable, no matter what the occasion. And indeed, politics have also been on Herrera’s mind. She recently dressed Michelle Obama for the cover of American Vogue's December issue. “Michelle has been impeccable as the first lady,” she says. As for Melania Trump, the designer reckons that her colleagues will soon cotton on to the idea of starting a sartorial conversation with the new first lady.

“I think that in two or three months they'll reach out, because it's fashion,” Herrera says. “You'll see everyone dressing Melania. She's representing the United States.”

To be sure, Herrera has plenty of history to draw upon to make that sort of educated guess. Much of her success lies in her ability to adapt to present industry demands without shifting her own point of view. “We have to be very conscious now, more than ever, in the fashion world,” she says. “Because it is very flimsy. Everything is changing.”

Recently, the brand has worked to better unify its message across categories, bringing on Mario Testino in 2015 to shoot every advertising campaign, from sunglasses — a hot category for CH — to scent. While the reigning maximalist, magpie aesthetic goes against Herrera’s polished preferences, current fashions also draw heavily from the opulence of the 1980s, a time when Herrera proved there was always a customer for her clean-lined styles.

We have to be very conscious now, more than ever, in the fashion world. Because it is very flimsy. Everything is changing.

But for Herrera, there is no looking back. In December, CH by Carolina Herrera will launch e-commerce in select European countries, followed by the States in early 2017. There are plans to launch Good Girl in the US in the spring of 2017 as well. She’ll continue to travel the world, making personal appearances for the fragrance and meeting with clients at department stores. What she doesn’t care for, though, is talk of what mark she will leave on the fashion industry.

“If you think about your legacy, you're going to be gone very soon,” she says. “No, I’m looking at this moment.”

Disclosure: Lauren Sherman travelled to Madrid as a guest of Carolina Herrera.