NEW YORK, United States — “We like to be the first to try things,” says Francois Kress, president and chief executive of Carolina Herrera. Indeed, while the 35-year-old fashion house may not be top of mind when it comes to digital innovation, the label and its fearless leader, Mrs Herrera herself, have been more than willing to experiment with everything from virtual reality to Instagram, where it has amassed more than 1 million followers.

On Thursday, Herrera will attempt to push her brand even further by launching a Kristian Schuller-shot portfolio of its 2017 Resort collection via Sweet, the Snapchat Discover publication launched in November 2015 in a joint venture with Hearst.

Of course, it’s not new for a brand to offer a single media outlet a first-look exclusive on collection images, but the choice of Sweet, which has 15 million unique views a month, speaks volumes about Carolina Herrera’s intentions. 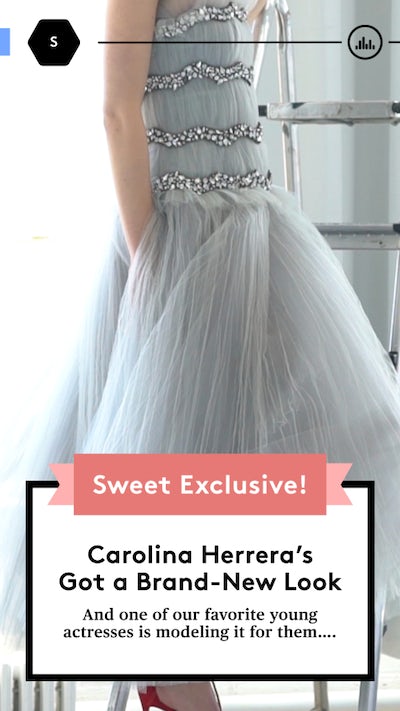 Both Sweet and the project’s star — 16-year-old "Mad Men" actress Kiernan Shipka — are of interest to Generation Z, the post-Millennial audience aged roughly six to 20-years-old and recognised as the first true digital natives.

“Mrs Herrera is someone who likes to have fun, and we saw that Kiernan really embodies that you can have fun and experiment with fashion while staying true to the brand and elegant,” Kress says. “It was a great match.”

While Carolina Herrera New York — the collection Shipka is representing — may be a luxury label well out of the price range of most of Generation Z, or Millennials for that matter, Kress says it’s more about selling the dream. After all, the crux of the business lies in the fragrance business, along with the mid-priced CH Carolina Herrera “lifestyle” line, which is sold at 141 standalone stores and 215 department store concessions globally. Carolina Herrera does not release financial results, but it’s parent company, Puig, generated nearly €1.7 billion (or $1.9 billion at current exchange) in the 2015 fiscal year.

“It’s a way for us to reach new demographics — a broader demographic,” Kress says. “When we talk about bringing Carolina Herrera to a younger audience, we already have things for them [to buy]. We also certainly want to plant the seeds for the future, whether it be for a formal occasion, or a wedding, or daywear,” he continues. “[The project] doesn’t have a commercial ambition, per se, but is instead a branding exercise that shows the best of the brands we cover to a very large audience.”

While the unexpected approach is enough to turn heads, fashion insiders are equally as curious to glimpse the collection given the high-profile changes to Herrera’s design team. In February 2016, just weeks after the spring show, it was announced that Monse designers Laura Kim and Fernando Garcia would join the company as senior vice president of design and consultant, respectively, with an emphasis that Herrera would maintain complete creative control.

Shipka’s portfolio suggests a new, enthusiastic energy in the collection, playing on house codes like polka dots and banded stripes, with plenty of tulle and sparkle. “For us, the bottom line is that we’re trying to stay as relevant and desirable as we have been for 35 years,” Kress says. “That requires introducing talent on the team, not just in design. It’s an evolution, not a revolution, totally done with great respect for the DNA of the brand. The great thing about this collection is that you have no doubt looking at any item that it’s a Herrera.”

According to Kress, the tweaks have been well received at market thus far, though the company declined to provide specific metrics. Nonetheless, it’s clear the season, with all its moving parts, could result in a new way forward for the brand.