In today's News Bites, Sofia Coppola on the inspiration behind her latest film, which celebrates the relaunch of Cartier's Panthère watch.

Cartier and Sofia Coppola have created a movie to mark the relaunch of the Panthère watch.

Coppola, a longtime friend of the Richemont-owned jewellery house, took her creative lead from the ‘80s, the era in which the famed timepiece made its original debut. Set in Los Angeles, the film stars Courtney Eaton and singer Donna Summer’s daughters, Brooklyn and Amanda Sudano. 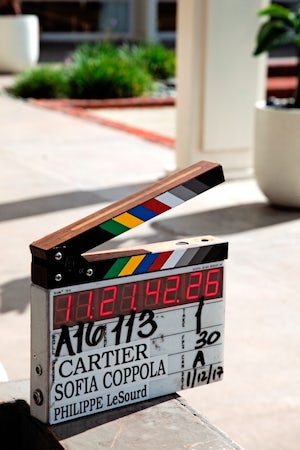 On the Cartier set | Source: Courtesy

“I love the era when the Panthère debuted and I think of it as glamorous and sexy, and thought about films and the women of that era,” Coppola told BoF of the inspiration behind the film. “I wanted it to feel like a perfect fun day in the life of the Panthère watch and the woman who is wearing it. I imagined she’s visiting LA and away from work, and is enjoying the sun, romance and her friends.”

Cartier’s relaunch of the Panthère — which originally debuted in 1983 and has not been produced by the house since 2004 — follows a wave of fresh demand for the timepiece from clients, stores and on social media.

The decision to market the Panthère relaunch with a movie, one directed by Coppola, no less, was an easy one, said Arnaud Carrez, international marketing and communications director for Cartier: “It felt very natural for us for us to ask Sofia to be the director of this Panthère movie,” he said. “She’s really an icon of style, taste and contemporary elegance and we wanted really this movie to highlight the Panthère woman and the Cartier femininity.”

The Panthère will go on sale June 1; the movie will launch on social media and in selected cinemas globally from June. — Limei Hoang