This month, our Spotlight shines on Copenhagen-based womenswear designer Cecilie Bahnsen, whose artisanal, girlish womenswear label was a finalist in this year’s LVMH Prize.

This month, our Spotlight shines on Copenhagen-based womenswear designer Cecilie Bahnsen, whose artisanal, girlish womenswear label was a finalist in this year’s LVMH Prize.

COPENHAGEN, Denmark — Since founding her girlish namesake label three years ago, Cecilie Bahnsen has been influenced by the more traditional notion of femininity. Now four seasons in, the Copenhagen-based designer
is stocked at influential global stockists including Dover Street Market, SSENSE and Lane Crawford. In March, the label was selected as a finalist for the LVMH Prize.

“It’s a combination of a more decadent universe with a more minimalist one,” says Bahnsen about her line’s sculptural aesthetic. “I felt there was space to do a new take on femininity [like a] ruffled dress with boots or trainers,” she adds, referring to her latest Spring/Summer 2018 collection.

Born just outside of Copenhagen, Bahnsen attended the Danish Design School where she met designer Anja Vang Krag, whom she became first assistant to in 2007. Under the Danish designer, Bahnsen worked on freelance projects for Christian Dior as well as the Royal Danish Theatre. “Working with [Anja] was super exciting and [after] seeing the level of craftsmanship, I was determined to get going,” says Bahnsen.

Upon completing her BA in 2007, she took on a design internship at John Galliano in Paris, where she was later hired as a first line assistant and print designer, before applying for the prestigious womenswear MA at the Royal College of Art in London, graduating in 2010. 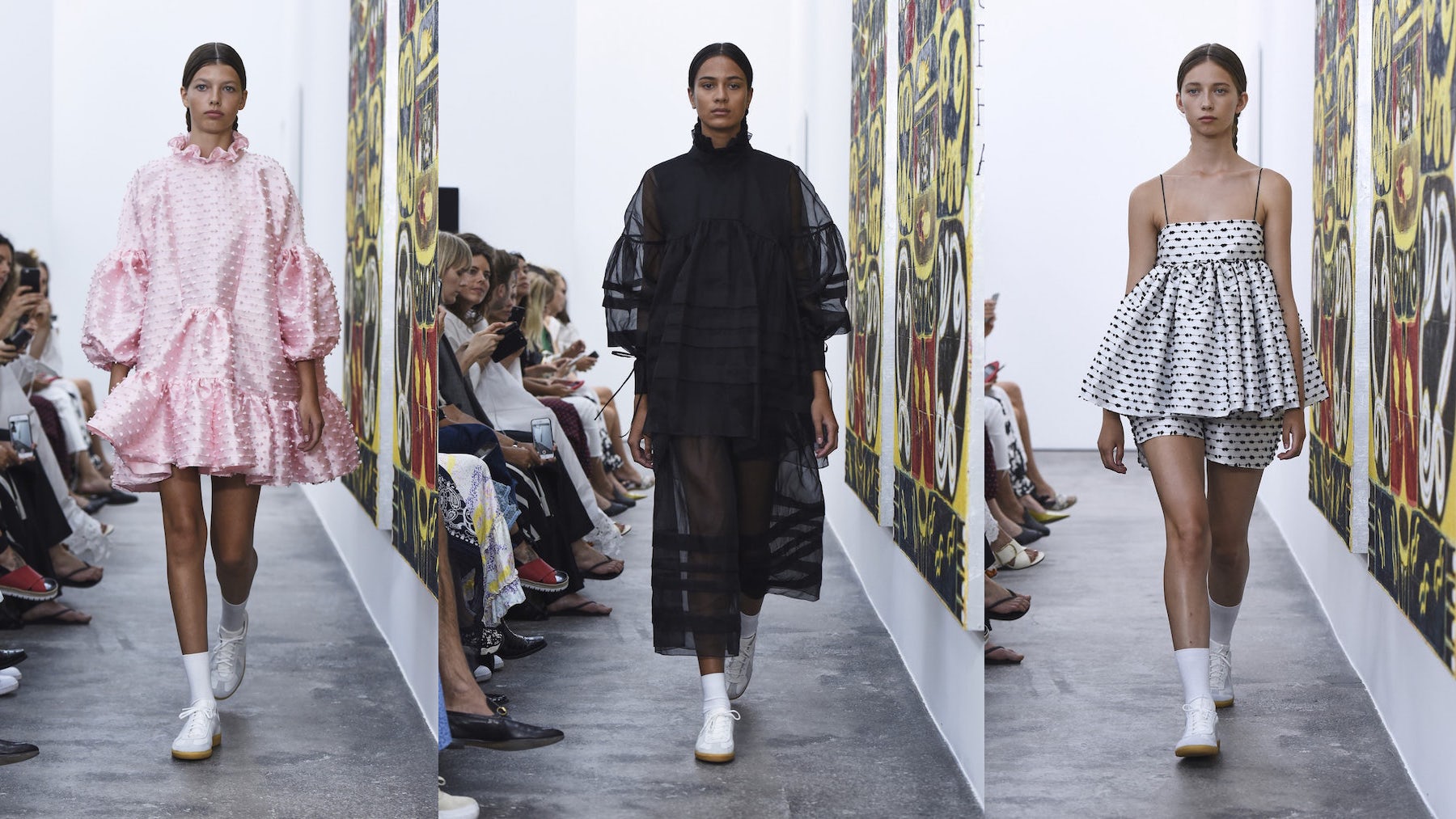 View Collection
“I always knew that I wanted to get as much experience as possible before starting my own company,” says the designer, who became a design assistant at Erdem in 2011. “I learned a lot about craftsmanship, detailing and that you shouldn’t be afraid to be feminine and romantic in your approach, which for me is so important to carry on in my brand today… but also to mix it with the minimalistic Scandinavian aesthetic that I grew up with.”

Having always dreamt of starting her own line, now feeling experienced enough, Bahnsen started designing her brand’s first collection in June 2015, back in Denmark. Her debut Spring/Summer 2016 collection was exclusively stocked in Dover Street Market after she was discovered by one of the store’s buyers in a showroom during London Fashion Week.

By February 2017, she was showing her first runway collection during Copenhagen Fashion Week at the city’s modern opera house — following her Danish Design Fashion Award win, which sponsored her debut show. “Having the unique opportunity to pick the venue, the models and curate the whole universe around the brand was very important,” says Bahsen, who became a finalist for the 2017 LVMH Prize shortly after.

For her second show in August, Bahnsen chose Copenhagen’s Galleri Nicolai Wallner as the setting of her Spring/Summer 2018 collection during which 22 models walked down the runway in the brand’s quilted silk fencing blouses for $830, signature embroidered baby doll dresses for $1,765 and fishnet smocks strewn with velvet ribbon bows for $1,920. The collection was aligned with the designer’s desire to create grown-up uniforms for the kind of girl who “could be Peggy Guggenheim’s niece” at an art gallery or on a school trip.

Despite only having one employee on sales and one design assistant — the brand outsources its production — and each garment being hand-made, Bahnsen is rapidly growing the number of doors her label is stocked in. Between its Spring/Summer 2017 and Spring/Summer 2018 seasons, the brand’s stockists grew from seven to 22. “We’re really running at full speed [but] our focus is looking after our stores and see what we can do to show the story of the brand, like pop-up installations,” explains the designer.

Looking forward, Bahnsen is eyeing international expansion. To start, she is launching a debut pre-fall collection this season, with the introduction of categories like footwear, bags and jewellery to follow further along the line. “What we show on the catwalk would then really be what you can get in the stores,” says Bahnsen. “After, we can hopefully show internationally and [show the brand] in London in September 2018.”