Cartier chief executive Cyrille Vigneron discusses his vision for the world-famous jeweller, starting with the re-opening of its historic New York mansion.

Cartier chief executive Cyrille Vigneron discusses his vision for the world-famous jeweller, starting with the re-opening of its historic New York mansion.

NEW YORK, United States — On the evening of Wednesday, September 7, after five years of planning and two and a half years of renovations, Cartier unlocked the doors of its historic mansion at 653 Fifth Avenue, which Pierre Cartier acquired from the Plant family in 1917 for $100 and a double strand of perfectly matched natural pearls. The necklace, coveted by matriarch Maisie Plant, was said to be worth more than the property, which, at the time, was valued at $925,000.

When, exactly, the store will open to the public is still unknown. Cartier has been waiting on relevant approvals from the local fire department. But last week, for one night, the mansion came alive with a who’s who of celebrities, fashion industry insiders and cultural icons. The host committee alone — which included Graydon Carter, Sofia Coppola, Patti Smith and David Chang — was enough to elicit a mountain of RSVPs from the gold-foiled, embossed invitation.

It’s no surprise that the overhaul of the landmark building, led by architect Thierry Despont, took well over two years to complete. What was once a maze of cramped rooms with only two floors and 8,600 square feet of retail space has been completely rearranged to yield 44,100 square feet of shopping space set over four almost wide open, meticulously organised floors. (The fifth floor of the building, formerly corporate offices, is now a workshop.)

The details of the renovation are downright bedazzling: 43 different fabrics and leathers used on everything from walls to draperies, 30 new chandeliers crafted and 35 unique furniture styles designed by Despont. Then there are the glistening cases of jewels, precious metals and leather accessories, from the popular Love series on Floor 1 to the Princess Grace Salon on Floor 2, where the legendary style icon’s wedding suite is on display, lent to the company by Monaco’s royal family. Store-specific exclusives include a necklace inspired by Plant’s, positioned prominently near the 52nd Street entrance and containing 217 white-and-coloured natural pearls that took nearly two decades to assemble. ”Perhaps it will be gone by the time we open next week,” says an executive passing by the display. 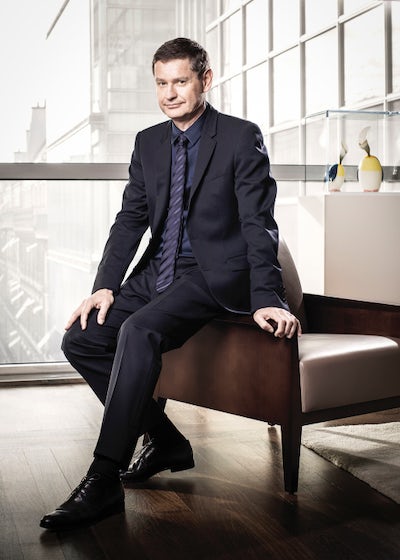 Re-energising Cartier’s brand, which has become somewhat dusty in recent years, is the key reason for the revamp, much as it was the prime driver of the refurbishment of the brand’s Champs-Elysées flagship in 2015, this year’s updates to the Tokyo Ginza and Seoul Maison Cheongdam locations and the ongoing renovation of Cartier’s Bond Street store in London. “The brand is respected worldwide as a leader in jewellery, but there was a perception that it was a bit quiet, having aged to an extent,” explains Cartier International chief executive Cyrille Vigneron, who joined in January 2016 after the resignation of Stanislas de Quercize late last year. “The long-term perspective is to regain [our] energy and find a contemporary way to express it. I think this mansion is a very good example. It’s entirely reinvented in a way that it looks like it has been here forever.”

Cartier remains a star in the hard luxury portfolio of Swiss conglomerate Richemont, accounting for roughly 70 percent of its EBIT (earnings before interest and tax), according to estimates by Morgan Stanley. If Vigneron excels in his new role, he may be pushed to the front of the line to replace Richard Lepeu, Richemont’s current chief executive. Lepeu’s co-chief executive, Bernard Fornas, retired earlier this year, prompting analysts to speculate on a long-term CEO-succession plan for the company. “We see [Vigneron] as one of the potential candidates for the top job at Richemont if he succeeds in turning around Cartier,” Thomas Chauvet, a luxury goods analyst at Citigroup, wrote in a March 2016 note.

In the 2015 to 2016 fiscal year, sales in the group’s jewellery category — which includes Cartier, along with Van Cleef & Arpels and Giampiero Bodino — amounted to €6 billion ($6.7 billion), more than half the company’s €11.1 billion ($12.5 billion) in overall sales revenue. Cartier is also a well-reputed brand, valued at $6.8 billion in 2016, according to Millward Brown’s annual ranking of the top 100 brands in the world. But the value of the Cartier brand has been decreasing steadily in recent years, down from $7.6 billion in 2015 and $8.9 billion in 2014. And while hard luxury — in particular fine jewellery, which drives greater sales for Cartier than watches — has proved to be relatively resilient, depressed consumer confidence and slowing tourist flows afflicting retail at large mean that the category has nonetheless suffered. (Here in the US market, uncertainty around the upcoming presidential election has reduced spending, while a dip in tourism from BRIC countries has put a dent in both foot traffic and sales.)

On September 14, Richemont is expected to announce a double-digit decline in overall sales for the first five months of the 2016 to 2017 fiscal year, according to a recent note from analysts at Morgan Stanley. “Growth is already under pressure from depressed Asian consumption (particularly within the watch segment) and the risks of a slowdown in Europe increase the earnings risk,” the analysts wrote. “In an environment of weaker consumer confidence, the watches and jewellery category [is] likely to be most vulnerable.”

In the past...you would buy something affordable in your 20s, something more paved in your 30s and something more gorgeous in your 40s — you don’t have those patterns anymore.

According to Vigneron, Cartier’s challenges are also linked to the rise of a more complex and unpredictable consumer landscape, reshaped by globalisation. Today, values and spending patterns are different across different markets. For instance, Millennials in the West — where the next generation is less affluent than its parents — shy away from big-ticket items, opting for accessibly-priced, understated pieces that better fit into their less flashy, more casual lives. Meanwhile, in the upwardly mobile East, the opposite is happening. “We see some very young people from China quickly buying very expensive things,” Vigneron says. Then, there is another group that trades up once, but quickly trades down, he adds, likening this dynamic to a person who visits restaurants with three Michelin stars for a year, only to realise that she prefers bistros. “What we considered in the past an initiation path, where you would buy something affordable in your 20s, something more paved in your 30s and something more gorgeous in your 40s — you don’t have those patterns anymore,” he says. “You have all patterns.”

In order to cater to “all patterns,” Vigneron is working to ensure that the right product is available at every entry point to the brand. “As long as we have product lines that are clear in design and [purpose], then they work well in all categories,” he says. “Accessible products work well. Diamonds work well. High jewellery works well.”

The watches category — hit by a decrease in demand from China as well as the rise of smartwatches replacing “everyday” timepieces — presents a greater challenge. According to a 2015 study of the market conducted by Deloitte, “More watch executives are pessimistic about the outlook for the Swiss watch industry than those who are optimistic.”

Vigneron aims to better define the meaning of a Cartier watch beyond the company’s classic Tank style. “It’s a feminine brand. When you’re a jeweller, you mostly address women. We have to reconsider our offer, in some way, to be more specifically geared toward women,” he says. “On the other side, Cartier stands for masculine elegance. Not extreme sports. The more we clarify that, the more we’ll get traction.” The new cushion-shaped, vintage car-inspired Drive watch for men and the paved diamond oval face Hypnose watch for women reflect this.

For Vigneron, physical retail is still of primary importance, though he acknowledges the growing significance of e-commerce, especially in regions of the world that lack Cartier stores and where the brand is distributed through third parties, a practise that the company has been trying to rein in of late. He also says there is scope for multiple stores in certain cities, including New York, which is fast evolving. “There is always a limit of what you can do in a single place, as there is a question of preference and style,” he says. “The way New York is evolving, it will [need] different stores with different atmospheres. If there is a new area becoming more attractive for wealthy clients who want to settle there and stay there for their shopping, then we can consider.”

For now, however, the focus is on 653 Fifth Avenue, where Cartier has stood for nearly 100 years. “I’m sure it will still be here 100 years from now, and it will still be Cartier,” Vigneron says. “There is still room for a brand like ours. Overall, the global wealth is progressing. Overall, people are more encouraged, especially in the US. It’s not a linear growth, but there is growth. If we were not convinced, we wouldn’t have made this kind of investment.”