MILAN, Italy — In 1937, in Milan's Piazza San Babila, a new brand called Valextra was born. Eventually Valextra became known for producing the ultimate in Italian luxury leather goods for only the most wealthy and discerning Italian clients. Valextra was amongst the first to create products that matched the changing lifestyle of this elite class, who were just becoming accustomed to the luxury of air travel.

Fast forward 75 years and Valextra remains under-the-radar, having gone through a period of great financial difficulty. In short, the brand had lost its way, while competitors like Goyard, Hermès and Louis Vuitton were not only much better known, but also financially successful.

Still, many industry tastemakers, with knowledge of and access to everything and anything luxurious, are drawn to Valextra. There is something precious about this beautiful Italian brand, its craftsmanship and dedication to quality. On a recent visit to the Valextra showroom in Milan, I was promptly introduced to Tyler Brûlé, founder and editor-in-chief of Monocle, who was carefully examining the leather bags with his now well-known attention to all the fine little details. A few minutes later, Anna dello Russo, editor-at-large of Vogue Nippon, floated into the showroom with her dog Cucciolina, photographer Giampaolo Sgura, and naturally stylish assistant Viviana Volpicella in tow.

Add to this the news that Valextra is taking over the space in Barneys New York flagship previously occupied by Prada, launching new collaborations with Blackberry, selling Valextra iPad and Mac Airbook covers on Mr Porter, and even (somewhat surprisingly) working on a new bag collaboration with Katie Holmes. The Valextra team is certainly making a concerted effort to broaden the awareness of this legendary Italian brand.

I caught up with President Emanuele Carminati Molina to learn more about his investment in Valextra, the operational challenges he is facing in turning it around, and why technology gadgets like the iPad and Blackberry Playbook may play a key role in the brand's future, just as air travel once did during the brand's golden age.

BoF: Despite its enviable heritage and cult following, Valextra is still somewhat under-the-radar. Can you tell us a little about the Valextra story?


Emanuele Carminati Molina: The Fontana brothers, who founded Valextra, worked with exquisite, precious leather right from the beginning. Over time, they began to show very old Milanese families how to mix traditional leather craftsmanship with a new style, for example, due to the rise of air travel.  Many of the most important articles produced by Valextra were dedicated to travel, such as our famous Avieta, the first briefcase named ventiquattro, or '24 hour' bag. It was so important in terms of design that it won the prize Compasso D'Oro. We are still producing the same briefcase more than 70 years later. This is our story.

BoF: How did you first get involved with Valextra, and why?


ECM: Long after this golden period of Valextra was over, some time back, I learned that Valextra was up for sale. I was surprised to learn that the company was in a bad situation, and that I could have it for not so much money, but that it would require significant investment to make it work.  And so, in three days, without doing any due diligence I bought the company. It was an act of emotion; an act of love. I couldn't help thinking about all the memories I had from my first years of school here in Milano when I first came to know Valextra.

BoF: But you're a business man too. So, what was your goal for Valextra when you bought it?

ECM: My specific target was, in a very short time, to bring Valextra back to the very top of the luxury market in leather goods, because I was sure that this was possible, especially for a brand like Valextra.

BoF: How did you plan to recapture the old Valextra magic?

ECM: First, we had to make a kind of 'new deal.' Valextra had lost its ability to operate at the highest levels of quality following the situation that had arrived from the 1980 - 2000, when Valextra started working for external accounts. They were producing for Dunhill, for Cartier, for Armani, and for a lot of other people, slowly losing the Valextra soul and identity. And so, my first commitment was to rebuild the ability to produce beautiful things with the perfect quality. I went back to former Valextra craftsmen and tried to convince them to come back to work.

It was very difficult, but eventually all of these people came back, not for me, but for Valextra.  It was very important to find these people; to have the right compromise with them; and to start working with the same mind. In 2002, we were ready to start and now you can see with your own eyes what we are doing here.

We have to go very deep in our souls to really understand what we are doing. Everything has to give us emotions; good sensations. That's really important. I appreciate very much what I can find in other stores and I really respect  all the other companies, but only at Valextra do I find real emotion.

BoF: But how will you sustain Valextra's level of  craftsmanship when all of these highly-skilled craftsmen can no longer work?

ECM: This is a very good question. We have about 6o people working in our factory, and soon more than 15 of these people will retire. It's impossible to replace them, with their level of skill and experience. Very few young people have the patience for this kind of work.  Of course, we are trying to teach some more people how to work but, probably we will have to seek help from external laboratories where we can send some of our masters to control and oversee the production, to control the quality. We will always produce only in Italy and always very close to our own company factories. 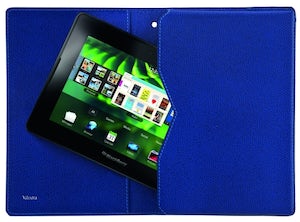 BoF: But you are also optimistically looking ahead with new projects, including a collaboration with Blackberry.

Yes, it all started when we agreed to study and develop smartphone covers for the Curve. RIM [Research in Motion] was impressed by the creativity and style of Valextra and expressed a desire for a deeper collaboration with us. For us, RIM was the the ideal tech partner and we agreed to study a cover for the Playbook, the new BlackBerry tablet.

Respecting our philosophy of interpreting the époque, we have been closely following the evolution of technology products that have become part of our daily lives. We will continue to study and create accessories that may connect in harmony with these tech gadgets. Our objective is not only to dress, but to modify the impact of the object by transforming it from a piece of technology into a symbol of elegance.

The worldwide success obtained by this concept of intertwining elegance with technology, has resulted in the sell out of our covers, which we believe hold a crucial position in our future strategies.