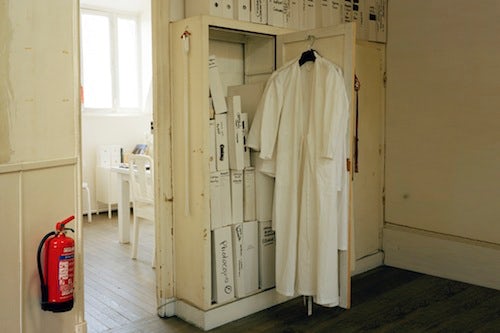 On the eve of Maison Martin Margiela's Spring/Summer 2012 fashion show in Paris, we are pleased to publish our latest CEO Talk with Giovanni Pungetti.

PARIS, France – Our CEO Talks with the chief executives of international fashion brands are usually accompanied by photos of the figures who lead these businesses. Things at Maison Martin Margiela are not quite so simple. While Margiela chief executive Giovanni Pungetti was more than willing to sit down and have a discussion about this most-loved of fashion brands, providing a photo of himself was out of the question.

It all goes back to the philosophy of the company’s founder. Margiela himself carefully avoided being photographed. And for a time, the Maison only answered questions via fax or email, once telling Women’s Wear Daily that “the withdrawal of a designer’s profile creates a space that the garments may fill.”

But while this approach enabled the Margiela brand to build a cult following amongst fashion insiders, the high-concept style and secretive communications strategy seemed to hinder financial stability. Enter Only the Brave, part of the Diesel jeans empire founded by Italian fashion dynamo Renzo Rosso, who acquired the brand in 2002. To some, it was an odd pairing, bringing together a highly-respected conceptual talent with a commercial fashion powerhouse.

At first, the partnership seemed to work well, bringing more structure to the business and allowing Mr. Margiela to focus on the creative process. But, in October 2009 the Maison announced the departure of Martin Margiela from his namesake brand. To this day, the company maintains that Mr. Margiela left on good terms, but fashion observers have always wondered whether the strong (and seemingly opposed) commercial and creative forces could no longer co-exist.

Since then, it’s been all systems go for MMM, which is now designed by a creative team. The business has continued to expand into new geographies and product categories. The retail network was reorganised, a fragrance license with L’Oréal was signed, the leather goods collections was restructured, and an eyewear range was launched.

BoF sat down with Giovanni Pungetti at the Hotel La Maison Champs Élysées, part of which was re-designed by the Margiela team, to learn about Mr. Pungetti's plans for the brand’s future, and to better understand "the Margiela way" of doing business.

BoF: First things first, Mr. Pungetti. I know that Martin Margiela was always secretive, but why must you also be secretive?

Giovanni Pungetti: We don’t have a designer talking, so sometimes we have to deal with this kind of anonymous system. Sometimes we speak in a more evident way, even if I’m saying ‘Please don’t say my name, don’t quote me.’ But someone has to talk. In the end we are only two people talking: the president and shareholder (Renzo Rosso) and me. But we know the press also has some needs, so we cannot be too, too strict in our philosophy.

BoF: How did you first come to work in the fashion business?

GP: It was by chance. My first job was at General Motors in the administrative department. Then I did an MBA, where I discovered marketing and decided to switch my career. I had the chance to join Unilever where I started to do real brand management. I spent eight years there doing classical marketing, going step-by-step until I became marketing manager.

And then, suddenly I received a proposal to join Diesel and I decided to take this challenge. Of course in the beginning it was just jeans, so not the kind of fashion that we are talking about today, but it was a good beginning.

GP: I’m quite provocative in saying this but the reality is a brand is a brand. What is different is managing people. This is completely different; this is another world. Managing the people in a company like Margiela is the key difference.

BoF: What makes it different?

GP: In high fashion companies you work 99 percent with creative people, and managing creative people is like managing artists. In industrial companies you manage other managers. The kind of mentality, the kind of thinking of managers – even if they are a little bit creative – is different to managing an artist. Artists by definition are unmanageable, so you have to try to manage them, try to lead them, try to guide them without managing them and this is the most challenging part.

BoF: It begs the question. After seven years of working together with Mr Margiela, he decided to leave. Can you comment a bit on the nature of his decision to leave, and the impact that has had on the business? He was secretive, but his aura was always there in the clothes, and in the way things were presented and in the way the brand communicated. How has Maison Martin Margiela dealt with departure of its visionary founder?

GP: We have a policy not talk about this. He left. This [was] his decision, and we respect it. The only thing that I can say is that his departure was progressive and did not happen from one day to the next. He was very good in delegating. At the time I started at the company, he was also designing for Hermès. He had three days a week at Hermès – and this was for five years. After the contract with Hermès, his attitude didn’t change. He was not so present in the company and was very, very good in delegating and making people grow behind his vision. This is the only thing that I can and want to say about him.

The brand is so strong. The philosophy of the brand is 360 degrees. The team was able to go ahead without problems. Of course we miss him, but the system that he put in place since the beginning gave us the possibility to go on.

BoF: So what you’re saying is that because his vision was so clear and his philosophy was so embedded in the culture of the organization, that today, perhaps the visionary founder isn’t as required? You need that person at the beginning to set everything in place, but things can continue on without him.

GP: Yes, absolutely. He created a system of work. I don’t want to say that art is only a system of work, but it is a little bit. I think all the artists have a method; not only a vision and natural creativity. He helped us to go on and of course what [we have done] is to reinforce the team in terms of talent, because talent is the key in this job. His right hand, [who] worked with him for 20 years, is leading the team today. We are not a studio in which everybody is doing what he or she wants. There is a person leading the team just as Martin was leading before. In a way, this person was leading the team before, as Martin was in and out.

BoF: Let’s shift focus for a moment. I’m really interested to learn about the expansion of the business, both in terms of distribution and in terms of product. Can you describe what the business was like when you first came into it and how has it changed and grown since 2002?

GP: The company was small. It was about €15m [in revenue] but with all the ingredients already. It had a very strong reputation, strong image and strong customer loyalty, but was very small. There were already accessories; there was already the casual line; there were already retail stores, department stores, and we were already present in nearly all the developed countries. Everything was there, but nothing was [fully] exploited; nothing was developed. The company is about five times as big today, with more than €75m in turnover.

I remember having a conversation with the team and Martin, and I said, ‘Listen guys you do beautiful things, but nobody sees this, so let’s try and show what you are able to do.’ At the time, they didn’t want to be too visible, because the idea was that more visible they were, the less cool they were. For me, this was the key mistake in the company at this time, thinking that only by being invisible could [they] have been successful. This is not true.

So, we did not increase the distribution, but we started to be present in the right stores and also [started] exploiting all the new countries that they were developing. We didn’t launch any new collections, we simply organised and structured the accessories, bags and shoes that were already there, not only offering just a couple of shoes, but a collection of shoes. Not only offering a couple of bags, but a collection of bags. In the end we simply improved and increased the [existing] offer.

BoF: You made it viable as a business?

GP: Exactly, exactly. We do beautiful things, why should we hide them? Why? Even if we want to consider ourselves as a ‘dream.’ We are far away from, some centuries ago, where there were some artists doing things on the last floor and nobody was able to see them. We were trying not to destroy the philosophy of the company. A big, big merit of our shareholder, has been letting us develop the business in our way, not [just] using a 'copy-paste' system.

BoF: So this wasn’t about taking the Diesel approach, saying, ok let’s just do the same thing as Diesel?

GP: I remember when Diesel bought Margiela, everybody was worried that we would launch a jeans line and all that. We [would just] be destroying our philosophy. On the inside this was not a real worry. He [Renzo Rosso] is too clever not to understand that changing the ingredients of the company, would have changed the company itself. So we did it our way.

BoF: You mentioned developing countries before. I understand the Margiela brand has a growing following in China. How do you adjust your strategy for a market that is, at least amongst some consumers, still focused on logos?

GP: We don’t change our strategy for China, we use a consistent approach. Asia-Pacific has always been a key market for Margiela, and we are choosing partners there who understand the Margiela way.

BoF: Speaking of growth opportunities, how does a brand like Margiela exist in the digital space?

GP: The world is changing. The world today is so fast in terms of communication with all kinds of tools and you cannot stay hidden, it’s impossible. We are prudent with regards to digital and we are doing what we need to do, because we have to do it, in our way again. There is always a Margiela way to do things, but we are not [yet] completely exploiting this medium.

For me, this [is] one of the most important revolutions after the industrial revolution, and it was happening at the end of the 90s. So we simply started to say, let’s show what we are able to do.

BoF: But still, you must have lost some of the cult following; that core clientele that was loyal to Margiela for all those years, because they liked that it was ‘invisible’?

GP: Surely we have lost some of them, the fanatic ones that were looking for something only because it was [impossible to find.] Let’s leave them to look for someone else. The world is big enough. We have so many consumers, new clever consumers that understand us.

Today, consumers are very clever, in comparison to when I started in the business. You cannot lie to them. You cannot say things that are not true, you have to be honest, and we always have been honest with them. If you are transparent, honest, they will understand you.