The Other Reason for Chanel’s Exotic Skins Ban

While competitors were busy snapping up farms and tanneries, the French luxury house failed to secure its exotics supply chain, giving it diminished access to top quality materials.

The Other Reason for Chanel’s Exotic Skins Ban

While competitors were busy snapping up farms and tanneries, the French luxury house failed to secure its exotics supply chain, giving it diminished access to top quality materials.

LONDON, United Kingdom — When Chanel announced it was banning the use of exotic skins on Tuesday, many in the industry, including Milan-based supplier Italhide, were taken by surprise. “I haven’t had any sort of indication from Chanel in the past,” said the company’s managing director, Enrico Chiesa. “I’ve written them today because they have quite a few samples from us.”

In recent days, products like Chanel’s Boy Bag in sharkskin, its Mini Flap bag in alligator and its Classic handbag in python have disappeared from the brand’s website, where they were showcased but not sold. (The brand doesn’t sell core products like ready-to-wear and handbags online).

Chanel, by far the largest player in luxury to ban exotic skins, cited difficulty obtaining ethically sourced skins as the rationale behind the surprise move. “In the past three years, it has become more it difficult and complex to be able to source and have the right ethics,” said the brand’s president of fashion and president of Chanel SAS, Bruno Pavlovsky. 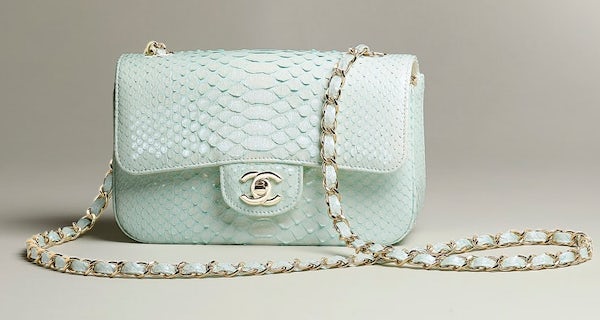 Chanel mini flap bag in python and gold metal, which disappeared from the site | Source: Chanel

Activists have portrayed the move as a watershed moment, like Gucci’s decision to ban fur in October 2017. “The media interest resulting from this is likely to have a major impact,” said Yvonne Taylor, PETA’s director of corporate projects. “Luxury brands know it’s impossible to source exotic skins and have a guarantee of welfare standards,” added PJ Smith, director of fashion policy at Humane Society.

And yet there was likely more to Chanel’s decision than ethics.

Around the start of the decade — when exotic skins made up almost 10 percent of total revenue from handbag sales for luxury brands — key luxury competitors responded to a surge in consumer demand by taking greater control of their supply chains through vertical integration with farms in the form of investment or outright acquisition in a race to secure access to high-quality materials for what are lucrative, high-margin products.

Kering, for example, invested in a python farm in Thailand in January 2017, emphasising in a statement that such moves enabled “improved traceability and management of sourcing and supply chains.” LVMH acquired a 51 percent stake in crocodile skins supplier Heng Long in 2011 and, in 2017, bought Johnstone River crocodile farm, north of Queensland. Meanwhile, Hermès bought crocodile farms in Cairns, Australia and Louisiana in 2013 and owns several tanneries through its subsidiary HCP (Hermès Cuirs Precieux).

Chanel pursued a different strategy, relying on a wide range of third-party farms for its products. The approach may have backfired. “Since Chanel is a big player, but not in control of the supply chain like all of these competitors are, it’s having more trouble in finding the materials it wants,” said Chiesa. “They have to rely on their competitors producing units for the supply of the materials they use.”

“There are companies like Hermès which own their own farms,” added Mario Ortelli, managing partner of luxury advisors Ortelli & Co. “There are bottlenecks of supply and the top tier brands want the most beautiful parts.” Chanel, with less leverage than its luxury peers, was increasingly shut out from the highest quality materials.

This is 100 percent the case of Chanel being a loser in this market and being pushed out.

“This is 100 percent the case of Chanel being a loser in this market and being pushed out by Hermès, Kering and LVMH,” said Christy Plott, one of the owners of American Tanning & Leather, which owns crocodile and alligator farms in Florida.

Then again, products made with exotic skins have traditionally accounted for only a low single-digit percentage of Chanel’s overall business, a much smaller portion compared to competitors like Hermès, where they make up a higher percentage of sales, though still in the single digits, said Ortelli. “It was not that important,” acknowledged Pavlovsky earlier this week.

Lack of financial incentive goes a long way towards explaining why Chanel decided not to snap up farms to protect its supply of exotic skins as competitors took action. And weighing the challenge of trying to compete at a disadvantage against the company’s longstanding focus on differentiating itself with the kind of craftsmanship enabled by the traditional ateliers under its Paraffection subsidiary and the positive public relations coup that can come from renouncing the use of animal products, Chanel seems to have made a sound decision.

"We have never bought any raw-material companies," Pavlovsky said. "We are not experts in that."

“The brands that haven’t used exotics will drop it and use this as a [public relations] opportunity,” predicted Chiesa. “Bigger brands who have put a lot of money, effort and have knowledge into the subject will not. Hermès certainly will not. Gucci will not.”

Luxury Brands Are Snapping Up Farms to Control Their Supply Chains