PARIS, France — In many offices on a Friday afternoon in Paris, you might expect a more laid back atmosphere. But the headquarters of the freshly rebranded Lemaire (formerly known as Christophe Lemaire) are a veritable hive of activity. Temporary dressing rooms have sprouted up in the entrance hall; racks of clothes are here and there. No-one is wearing shoes.

The brand is shooting images for its recently launched e-commerce site. But while the office is busy, somehow the overriding atmosphere remains peaceful (perhaps because everyone is padding about barefoot). There are no loud noises, no abrupt gestures. This is how Christophe Lemaire works. No matter what he does, everything is calm.

Today, Lemaire also announced a collaboration with Japanese retail giant Uniqlo to produce a men's and women's collection, starting with the autumn/winter 2015 season. "We have always dreamt to work with Uniqlo. Uniqlo designs qualitative and made for all garments for everyday life. It is also our approach to fashion, and the philosophy of Lemaire," said the company in a statement.

In 2010, Lemaire was appointed artistic director of womenswear at Hermès, a role he left last summer, after four years, to focus full-time on his own label. “Hermès is not a brand you can manage from afar. I was very involved there, but I needed to be more involved here,” he explains. “To develop Lemaire well, I need to be very involved in the process. I don’t delegate much. Not because I’m a control freak, but because what interests me is doing the clothes, working on details, the construction. I don’t believe in having an army of designers working for me where I’d only validate their work. I need to be at the fittings, to pick out the buttons. I can’t flutter around several projects at the same time.”

There are no rules, that’s one thing I learned along the way.

“It was difficult to do Lacoste and my brand. After a few years, I decide to put the brand on hold. It wasn’t only a financial problem. There were issues with production, wholesale. My head was about to explode. I was doing the job that Sarah, Bastien and I are doing now. And I was doing it wrong. It was a thankless period, but it happened to be quite rewarding for the future.”

‘Team’ is a word of great importance to Christophe Lemaire as he spent many difficult years in need of one. Christophe Lemaire, the brand, first came into being when the designer won the Andam prize in 1990, the year after Martin Margiela. “I dived in without really knowing how to swim. I had success in Japan, but I didn't really have a team,” he explains. The Japanese business helped carry the brand for a few years, but Lemaire, who, in 2001, became artistic director at Lacoste, was ultimately unable to give the business the attention it needed.

Also growing is the team, which includes Sarah-Linh Tran — Lemaire’s partner, who has been co-designing the collections for sometime and taking a bow with Lemaire at his recent fashion shows — and Bastien Daguzan, who joined the company as managing director in October 2013 from Kris Van Assche.

It’s easy to find similarities between the collections Lemaire designed for Hermès and his work for his own label. There’s a sort of timeless elegance and discreet luxury at the core of both brands. But there are significant differences, too. For one, at Hermès, ready-to-wear accounts for a small portion of the overall business. While at Lemaire, clothes are what makes the business work. “We sell the clothes more than the accessories, that’s for sure. It’s reassuring because it means people don’t come to buy into a brand or a buzz,” says Lemaire. “We take great pleasure in designing timeless attire… In the past, I used to put pressure on myself trying to find new inspirations each seasons and do completely different things. But that’s not us.”

Lemaire learned a lot from his time at Hermès. “I learned the importance of having an intelligent relationship between marketing and creation. At Hermès, there is not really a marketing department. We don’t ask designers to come up with product to fulfil marketing needs. The products comes first and once it is validated, we think about how to showcase it, how to communicate. A lot of brands lost their souls by putting marketing first, but marketing is worthless if there are no good products.”

Additionally, Lemaire’s job at Hermès “gave us the confidence to reposition the [Lemaire] brand at a luxury level — we did not hesitate to go for high end fabrics,” recalls Tran. But, most importantly, the position boosted Lemaire’s status. “It served as an accelerator for my own brand. Being head of the womenswear at Hermès gave me a stamp of approval. People who didn’t really look at the brand started to look; people who didn’t really know what to think of us, started to like us.”

Even though the trio are thinking more and more about accessories, they don’t believe the category is essential commercially success. “There are no rules, that’s one thing I learned along the way. I’ve done the opposite of what everyone told me. People told me I was crazy to set up my own atelier in-house and now we know we were right because of the comfort it brings. We know where we want to go, we will follow our instincts — and work rationally. But we won’t plan too far ahead.” 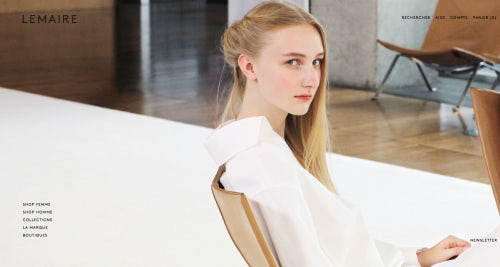 To finance their plans, Daguzan says the company is open to selling a minority stake in the business to an investor: “We’re healthy financially, but yes we will need someone for the development — to add fuel to the gas tank.” According to Lemaire and Daguzan, talks are already underway, but finding the right investor will take time.

Lemaire has suffered from a bad investor relationship in the past. In 2007, while at Lacoste, Lemaire wanted to revive his label — but not on his own — having been “traumatised” from the experience of going solo the first time around. A Japanese investment group offered to finance his return, including a shop in Paris, so he accepted. The idea was to design the clothes in Paris but manufacture in Japan. But very quickly, Lemaire saw the collaboration was doomed. Working long distances with the team in Japan was too difficult. “They had put together a team, there were nice and all, but there were not enough people and they didn’t have the necessary skills I was looking for.” Lemaire broke off the relationship and bought them out. “We came back to where we started.”

Lemaire currently has only a dozen employees and, to support the company’s growth, will also need to scale up its staff. This will take time too. From his time at Hermès, Lemaire absorbed a very particular approach to building company culture. “We want people who know and like the brand and who also want to stick around for a long time. We’re not willing to have someone come and work for us because he or she would think it will look good on his or her resumé. Cohesion is the most important thing. I believe that team work can be seen in the collections. I have seen the absurdity of disagreement, bad blood, people who take all the credit for stuff they haven't done. It makes me sad.”

Lemaire is certainly not a business pursuing growth at all costs. “We could not want to become a huge international brand with 300 retail stores. Maybe it doesn’t interest us,” says Lemaire.“There are other virtuous models at different levels. We don’t want to grow too fast. We don’t want to have too many people working here.”

Editor's Note: This article was updated on 3 March, 2015, to include the news of Lemaire's collaboration with Japanese retail giant Uniqlo.