As the editor-in-chief prepares to exit Glamour after 16 years, she reflects on today's media landscape, feminism and the title's Powered by Women initiative. 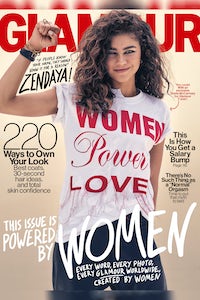 As the editor-in-chief prepares to exit Glamour after 16 years, she reflects on today's media landscape, feminism and the title's Powered by Women initiative.

NEW YORK, United States — On Monday after New York Fashion Week, during which she announced her upcoming resignation from American Glamour at the end of the year, editor-in-chief Cindi Leive was feeling more focused than sentimental.

“I've been in this job for 16 years and checked a lot of my personal goals off the list,” Leive tells BoF, adding that she has worked at Conde Nast for nearly 30 years. “I’m excited to see what somebody else does with this amazing brand.”

Now Leive is focused on finishing her tenure with a bang: the magazine’s flagship event — the 27th Annual Women of the Year Awards — which will take place in Brooklyn on November 13.

“With everything that's happening for women in the world this year, it was already shaping up to be a really epic event... Now I'm really determined to make it more so."

During her time at Glamour, Leive has not only seen a massive disruption in the media business, but also how many women’s interest magazines have become feminist platforms in a way that seemed a challenge even a decade ago, despite Glamour’s history of feminism and activism. Ruth Whitney, the magazine’s editor from 1967 to 1998, started the first column on women in Washington DC and banded women’s magazine editors together in the 1970s to support the Equal Rights Amendment.

“We stand for an idea and that idea is that women matter,” says Leive. “If you look at the brands that mean something in the hearts of young women today, part of the reason they have meaning is that they do something in the world.”

While Glamour’s point of view hasn’t been as loud as Teen Vogue’s activistic stance in the last two years — which in many ways better reflects the hunger for media brands that aren’t afraid to take risks in today’s politicised environment — Leive has ramped up Glamour’s feminist agenda beyond its pages.

Three years ago, the magazine launched its philanthropic initiative — The Girl Project — to further girls’ education around the world. And at the beginning of 2017 as the historic Women's March was gearing up, the magazine announced its Powered by Women initiative dedicated to increasing the number of female contributors in the magazine’s pages. Fashion photography, for example, is a traditionally male-dominated field.

“We’ve made a real concerted effort over the last year to increase the representation of women and all of those roles,” she says. “I think we came up with the idea before we knew what the outcome of the election was.”

The November issue, the cover of which was released Monday, raises the bar: for the first time, all seventeen Glamour editions from around the world have enlisted only female talent to produce the issue. The “sister editors-in-chief,” as Leive calls their network, decided to align earlier this year during a meeting in Paris after worldwide protests on International Women’s Day. "This was our way of getting behind female talent in our own home countries," she says. "Every set that was built, every nail that was pounded, we hired female talent to do it.”

This was our way of getting behind female talent in our own home countries.

Each November cover will also feature the same limited-edition T-shirt designed by Stella McCartney on its cover, which will also be worn by influencers and models backstage at her Spring 2018 runway show in Paris on Monday. “She's a strong woman who is not afraid of other strong women, and that to me is the spirit of what this issue is about.”

The outspoken actress and singer Zendaya is the cover star in seven markets, including the US, along with locally relevant personalities such as Toni Garrn on the German edition and Chiara Ferragni on the Italian edition. The issues will also share content, including a feature produced collectively by the different editors on the forces impacting women in each country, from maternity leave to culture, including fashion trends.

“This is going to be a big moment for the Glamour brand,” says Leive. What about the future of the Glamour brand, at least in the US? “The reason I feel confident about leaving is that there's a team of people here who really believe [in the brand’s commitment to women] and an audience of millions of women who want to see that and believe in it as well,” says Leive.

Leive says future editors-in-chief need to have a “gut level understanding” of digital and social media and understand how to work with brand partners. When she started this job, her interaction with advertisers centred on explaining her editorial vision. Now she focuses on creative ways to co-brand initiatives.

“I think I once described this job as one part ‘Devil Wears Prada’ and two parts Dunder Mifflin,” she says. “You need to be able to both articulate your own strong point of view and to be able to collaborate; those two things together are really key.”