TOKYO, Japan — The perception of Japanese fashion is often rooted in the outlandish, and it’s easy to see why. Tokyo has been home to some of the most extreme subcultures on earth, stretching back to the 90s when Harajuku became the epicentre of a new look that came to symbolise Japan’s fashion-forward youth culture. But much of that has changed and the country’s eccentric street style has since been replaced by the likes of Uniqlo, H&M and other global mass-market clothing, which are now among Japanese shoppers’ top favourite brands.

However, a new fashion school looks to change that.

“Do not be conservative,” says Kengo Kawano, matter of factly. “Be free and colourful.” According to the Osaka-born 22-year-old student, who stands out on the street in his Helen Lawrence sweater and Comme des Garçons Junya Watanabe Man x New Balance shoes along with his distinctive shaggy mullet and septum piercing, it was one of the first things he was taught in class at Coconogacco, a Tokyo-based institution that aims to challenge the traditional education system. 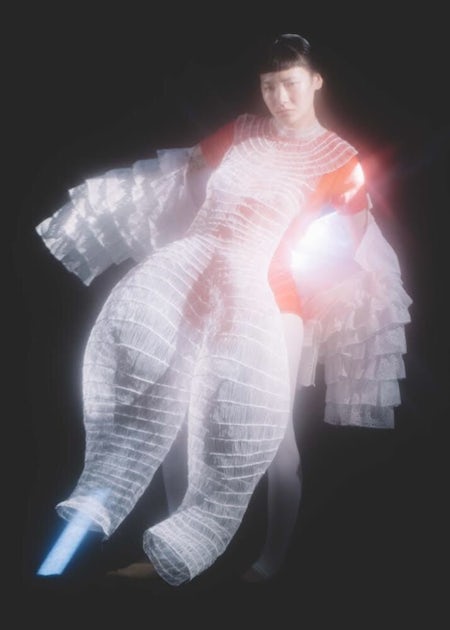 A design by ITS finalist Seiran Tsuno | Photo: Toki

Coconogacco was founded in 2008 by Yoshikazu Yamagata, a year after founding his own brand WrittenAfterwards, which was nominated for the LVMH Prize in 2015, making him the first Japanese contestant to take part in the prestigious award. The designer graduated in 2005 from Central Saint Martins’ BA Fashion course, during which he took a year out and worked as a design assistant for John Galliano in Paris. He also won an award from International Talent Support (ITS), a platform for emerging designers that kickstarted the careers of Demna Gvasalia, Aitor Throup and Peter Pilotto.

On his return to Tokyo after living abroad, Yamagata quickly came to realise how fundamentally different fashion education was in the rest of the world compared to Japan, which prioritises technical training above everything else. It inspired him to start a school of his own. “I wanted to create an innovative place for learning [and] an environment that gives importance to each student to bring out their character and talent,” he tells BoF.

Based in a nondescript building, about 5 minutes walk from Tokyo’s Bakuro-yokoyama station, Coconogacco, whose name translates to “school of individuality,” has since produced some of the most exciting names coming out of Japan, many of whom have since been shortlisted for the LVMH Prize, including Akiko Aoki (one of the most talked about designers at Tokyo Fashion Week this season), Soshi Otsuki, Yuko Koike and Keisuke Yoshida; Hyères prize winner Wataru Tominaga; Novesta creative director Yusuke Koishi; Swarovski jewellery award winner Noriko Nakazato; and ITS finalist Seiran Tsuno.

“Yamagata [encourages] creative liberation and his alternative philosophy has unleashed a new class of designers that wouldn’t come from more established schools like Bunka or Vantan,” says Tiffany Godoy, a veteran of the Tokyo fashion scene and former show host for Japan's national broadcasting channel NHK.

Indeed, Bunka, which originally began as a dressmaking school, focuses on teaching students how to create the perfect stitch and seam, whereas Vantan, which has schools in Tokyo and Osaka, offers introductory courses in fashion design and styling as well as hair and make-up. There is also Esmod Tokyo, an outpost of the French private school. Yamagata, however, believes fashion companies want creative designers, and encourages his students to think freely and more adventurously in terms of ideas generation and experimentation.

“The history of Japanese fashion education comes from when women were expected to attend these schools to learn how to be good housewives,” Yamagata says, noting Japan’s socially conservative society, which for long had relatively pronounced gender roles (women were expected to be stay-at-home wives and be capable of tasks like sewing). Japanese culture is also steeped in concepts like kaizen. The term, which implies a pursuit for perfection and is prevalent in many Japanese crafts like sushi, origami or ikebana, is what individuals often strive for.

“[People say] that Japanese fashion education only focuses on technique and how to make the prefect garment rather than pushing boundaries or creating ‘star’ designers,” notes Ashley Clarke, Mr Porter’s daily staff writer who lived in Tokyo for two years. “There is some truth in that generalisation, but the reason Coconogacco is successful is because it offers an abstract approach that isn’t prevalent in Japan.” One of the biggest challenges Japanese fashion students face is “finding their own voice and having the guts to be creative,” adds Godoy.

One of the biggest challenges Japanese fashion students face is finding their voice and having the guts to be creative.

The idea for Coconogacco, says Yamagata, was inspired by Setsu Mode Seminar, a once influential fashion school founded in 1954 by Setsu Nagasawa, who believed in education through physical expression over theory. His lessons included life drawing nudes, faces and hands (although he always encouraged students to focus on finding beautiful colour panes and composition, rather than trying to achieve realism.) “Nagasawa created many talented artists like Rei Kawakubo and Yohji Yamamoto by providing an environment with such liberties, like an artistic salon,” he explains. Setsu, however, closed in 2017. “It was the most important creative school in Japan after the Second World War. I want to reinterpret [that] in the present era.”

There are currently 100 students enrolled across Coconogacco’s five courses, which range from a “Lecture Course,” where students are expected to develop their knowledge of fashion history and understand how the industry is changing, costing 60,000 yen (about $548.7) per term (each term is four months long and the course can be taken as frequently as desired), to an “Advanced Course” aimed at fostering professional fashion designers and creatives, which Kawano is enrolled in, costing 240,000 yen ($2,194.8) per year. 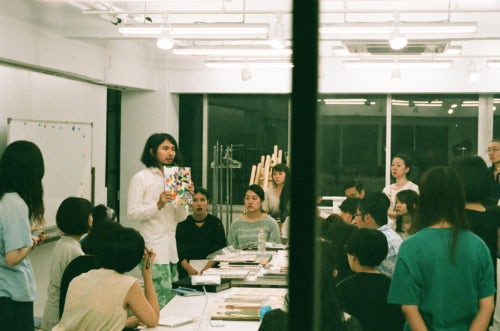 A class at Coconogacco in Tokyo | Photo: Chikashi Suzuki

Teachers and guest lecturers include Mikio Sakabe, a long-time educator at the school, who founded one of Japan's favourite avant-garde brands; Hirofumi Kurino, co-founder and creative advisor of United Arrows, one of Japan's most buzzed about fashion retailers; Hiromichi Ochiai of the luxury streetwear brand Facetasm; and Mihara Yashuhiro, who presents his collections in Paris and has collaborated with Puma.

But Coconogacco also invites guest lecturers outside of fashion. “That’s what makes Coconogacco so special: the wide range of lecturers from artists and philosophers to linguists, physicists and anatomists,” says Maria Nishio, an old friend of Yamagata’s, who now works as a senior lecturer at Central Saint Martins and previously held collaborative short courses between the two schools. “We want students to feel confident about expressing their ideas, vision, feelings and sensitivity. It’s important, especially in Japan, where individual expression may not always be welcomed.”

“The reality is that fashion is not simply about trends; it’s about having social awareness,” agrees United Arrows’ Kurino, who gave lectures on the Advanced Course. “The students of Coconogacco are unique and creatively original, but they’re not professional yet. I try to give them a wider point of view, so they can [better understand] the real world.”

Coconogacco [is] more of a meeting point for designers to come together.

Coconogacco also encourages peer-to-peer learning and collaboration, which is uncommon in a country that shares a similar social and educational hierarchy system to other Eastern nations like China, where teachers are usually given the utmost respect, as they are seen to have more knowledge and experience in both their field of expertise and in life. “I liked [Yamagata’s] idea of informal think tanks,” says Sarah Mower MBE, US Vogue’s chief critic and the British Fashion Council’s ambassador for emerging talent, who met Yamagata through Kurino in 2012. “He didn’t even describe [Coconogacco] as a school, more of a meeting point for designers to come together.”

Yamagata’s unorthodox approach has birthed some of Japan's recent successful exports. “Coconogacco introduced me to new opinion and diverse viewpoints. My classmates were not only fashion designers. Some of them were architects, biologists or [experts in] other subjects, so I was able to get many new ideas and opinions,” says Aoki, who graduated from the Advanced Course and was shortlisted for the 2018 LVMH prize. Today, the designer has 14 high-profile stockists including Lane Crawford and Ginza Mitsukoshi. “I learned how to absorb real world-level information and was able to step out on the world stage and gain recognition,” adds menswear designer Soshi Otsuki, a LVMH prize semi-finalist. 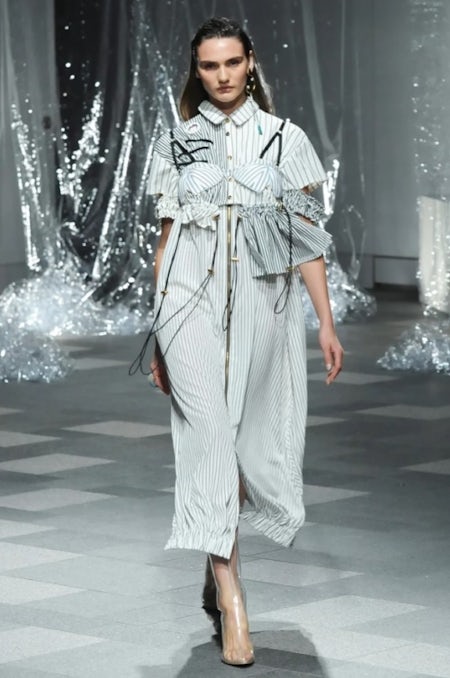 Still, some obstacles remain. Like many other Japanese institutions, Coconogacco’s students and teachers have poor English. “I know how hard it is to be an independent designer and Japanese people are very interested in this, but they do have this extra barrier if they want to export [their business]. They should have a programme of English lessons or people close to them who are bilingual,” says Mower. Some Japanese schools have turned to assistant language teachers (ALTs) from abroad to teach and communicate in English with their students, but this is not yet an option at Coconogacco. “We accept foreign students but at the moment it might be difficult if you don’t understand Japanese,” Yamagata acknowledges.

Many large Japanese fashion companies also still prefer to hire graduates from “big name universities,” says Akiko Shinoda, director of international relations for Amazon Tokyo Fashion Week. “When you apply for a job, that’s the first thing they check: the name of the university.” And while the school is certainly an important rebellious and alternative voice in Japan, it veers on the side of idealism, benefitting budding designers like Kawano, who want to start their own brand, rather than those that are seriously thinking of working for Japan’s strict and conventional companies.

"[Coconogacco] reflects an exciting young generation in Tokyo. But the tradition-minded culture of Bunka [is] better if you want to join a company as a brand designer after you graduate," says Tatsuro Motohashi, founder of the boutique, Xanadu, in the shopping and entertainment district of Shibuya.

“Yamagata has definitely capitalised on the lack of ‘creative’ education in Japan. His own label is very arty, but is it commercially viable? Maybe not so much. Starting the school was a way for him to survive as a designer,” adds Mr Porter's Clarke. However, Shinoda argues that Coconogacco’s “freely planned programme” is essential for the Japanese fashion industry. “The old, big Japanese companies need to have more creative people on their staff. Coconogacco is supplying us with young talented people!”

Looking ahead, Yamagata hopes to increase collaboration between Coconogacco and other fashion schools. “We previously collaborated with Central Saint Martins and we’re launching classes with Tokyo University of the Arts this summer, but I would like to have networks all over the world,” he says. “I hope our students can introduce something different to the world and be a creative player. The most important philosophy at Coconogacco is respect. Respect differences; respect all backgrounds; respect yourself and others.”