LOS ANGELES, United States — T-shirts, hoodies, hats, jackets and other concert souvenirs, emblazoned with faces, logos and album art, have always been part the programme for pop stars. But amid dwindling album sales, driven by massive technological disruption, and the rising importance of live concerts, tour ‘merch’ (as it’s known in the business) has become a more significant part of their business models, setting off a race amongst top acts like Justin Bieber, Kanye West and Rihanna to elevate their offering.

“Concert ‘merch’ has just become part of the multimedia experience and another way for really smart artists to continue to monetise their brands, as more people stream music and the music industry looks for other avenues to bring in revenue,” says Jian DeLeon, streetwear expert and senior menswear editor at WGSN.

"You want to sell so much 'merch' everyday that there’s nothing left to buy at every shelf,” adds Karla Welch, Justin Bieber's stylist, who shaped the Canadian star's current Purpose concert tour look. "I think that’s part of the formula. People want to wear something out of that show that says 'I went to that show, look how cool my shirt is.'"

According to Nielsen, reliable data on the exact size of the market is scarce, but many music industry insiders close to popular music stars agree that concert ‘merch’ is big business. “Artists are like brands, each product that comes out of their overall brand is an extension of it,” says Mat Vlasic, chief executive officer of Bravado, the largest player in the licensed concert merchandise business, which designs, manufactures and distributes concert merchandise for many of the world's biggest stars, who collectively generate billions of dollars from concert ticket and ‘merch’ sales. “It depends on the artist. Some will be more significant than others, but [concert 'merch'] is definitely a key revenue stream for many of them," continues Vlasic.

“Obviously, the sales [of concert 'merch'] are big and significant,” says Jerry Lorenzo, the Los Angeles-based founder and designer of Fear of God, who worked closely with Welch to create some of Justin’s Bieber’s looks for his current tour. “But they're just as important as a branding asset to an artist,” he continues. “It’s the new CD. It’s as important as the sound, a part of the vision."

The approach isn’t an entirely new, of course. For decades, the Grateful Dead, the San Francisco-based band synonymous with 1960s counterculture, generated the majority of their revenues from live performances and associated merchandise sales. (They even encouraged fans to record their concerts and share them with their network, creating demand for live shows and helping them build a passionate community of ‘Deadheads.’) “It’s still a very vibrant, ongoing entity that makes a lot of money off merchandise,” says David Meerman Scott, a marketing strategist and author of Marketing Lessons from the Grateful Dead. 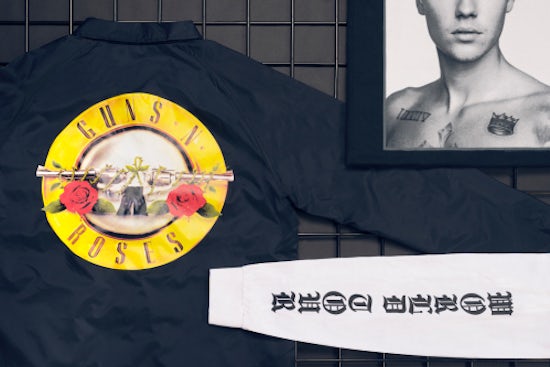 For Bieber’s own tour looks, Lorenzo and Welch aimed for what Lorenzo calls "elevated pedestrian.” According to Welch, the outfits were an "organic" reflection of the artist’s personal style, meaning a casual combination of ripped jeans and long silhouette shirts, including the much-publicised oversized tee printed with the words “Bigger Than Satan” and a picture of Marilyn Manson. “It plays on different levels of emotion,” explains Lorenzo. “You’re connecting to Bieber. If you’re a Bieber fan, you’re getting the feel of the timeless '90s rock god and Marilyn Manson." For the tour 'merch', "we tried to give it a little bit of the same language and the same vibe. What you’re buying at the venue, you’re seeing Justin wearing similar pieces on stage.”

Much like what’s sold on Kanye West’s The Life of Pablo tour and Rihanna's Anti tour, the 'merch' sold at Bieber’s concerts resembles the kind of popular luxury streetwear — oversized sweatshirts, bomber jackets and other items with graphic mashups of familiar, repurposed signifiers — that, these days, has fashion currency with the cool kids on social media platforms like Instagram and Snapchat. “Even if they’re loud and they’re colourful, because the (graphics) are something you’re accustomed to, it’s not as in your face,” says Lorenzo.

Mark Riddick, an illustrator famous for his artwork for heavy metal bands, designed the "Bieber" and "Purpose Tour" logos, which appeared alongside sans serif block letters and images on many of the pieces sold on Justin Bieber’s current tour, including t-shirts and outerwear, such as denim and camouflage jackets. Later this year, Bieber’s team plan to launch a higher-end line to complement the existing assortment.

"It's all tied to an experience that you might have had at a show. In fashion and in everything, people want to be attached to that real feeling, to that real emotion. People want to express that,” says Lorenzo.

Vlasic, who creates “a new retail experience” for each venue on each tour in order to attract customers in “20 to 30 seconds” says the wider fashion industry, locked in a debate on "fashion immediacy" and direct-to-consumer fashion shows, has a lot to learn from the business of concert 'merch.' “To be that reactive is something the fashion business can learn from. Some of these [tours] are probably doing bigger business [in merchandise] than major retail store on a per-day basis.”