To be sure, there are clearly advantages to launching titles that are tailored to specific languages and cultural traits. “In Brazil or India, they prefer local heroes and local models on the pages of Vogue; in Japan, they love to look at big international stars,” says Karina Dobrotvorskaya, president of new markets and editorial director of brand development at Condé Nast International. “Vogue Arabia obviously has to keep in mind some modesty rules when it comes to showing the body. Vogue Ukraine is fascinated with art and culture. A generic approach rooted in lowest-common-denominator global thinking doesn’t work.”

“Although we live in an extremely international and cosmopolitan environment, there are certain cultural nuances we take into account, as well as specific dress codes that are an integral part of the culture,” adds Manuel Arnaut, editor-in-chief of Vogue Arabia.

National titles are also advantageous for major brand partners. “In terms of credits within the fashion content, national editions are not only to feature local brands and local themes, but also the international brands. Their product and the way they communicate with their clients is different in China than in Russia,” says Valéria Bessolo Llopiz, senior vice president and international director at Elle. “Even the big luxury names adapt their product. For example, in China, you have specific collections.”

But brands are also looking for advertising products with international reach. “There’s an increasing appetite for adverting solutions across multiple regions,” explains Dobrotvorskaya. Condé Nast International has established a commercial team in London as a single touch point for brands interested in running advertising campaigns across markets.

Hearst, too, increasingly sells advertising on a pan-regional or international basis. David Carey, president of Hearst Magazines, attributes this shift, in part, to the fact that dominant platforms like Google and Facebook — which together attracted one-fifth of total global advertising spend last year — are “singular, global businesses.”

I would suspect that the local content will shrink somewhat as the global content increases; that feels reflective of both advertiser trends as well as consumer interests.

Operating a slew of standalone national editions, with their own parallel cost structures, is also expensive and in today’s hyper-competitive media landscape, legacy publishers are looking for efficiencies by sharing content across portfolios that have traditionally been fragmented by brand and geography. “In the last year, we’ve created an enhanced content management platform for print content that makes it easier for the international editions to work with one another,” explains Carey.

Certainly, when it comes to online news stories, celebrity style galleries and trend pieces, which are more commoditised, there are huge opportunities for content sharing across titles. Sharing high-end print content can also be advantageous. Carey cites a recent “Gucci’s Urban Garden story” as an example of top-tier editorial content that ended up running in 25 international editions of Harper’s Bazaar: “If you’re going to invest in a great piece of content like the Gucci flower garden, it makes sense for you to have that great creativity seen by as many people as possible.” 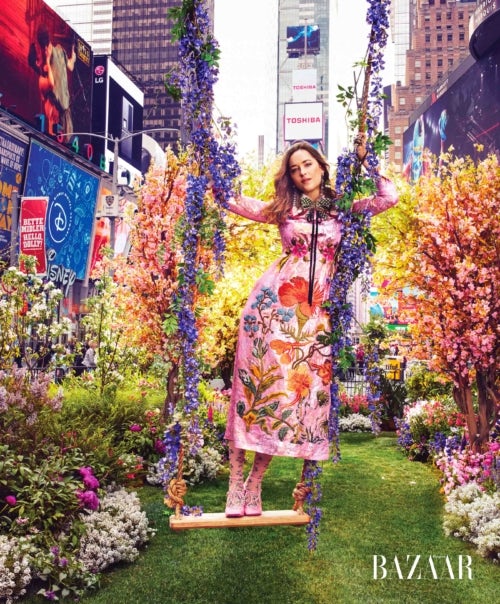 Sharing content across international editions is something Harper’s Bazaar has been doing since 2012 when ex-Vogue Paris editor Carine Roitfeld was appointed global fashion director at the magazine, where she creates what Carey calls “drum-roll” content, which is syndicated across all 32 Harper’s Bazaar editions worldwide.

“International content is very key for us as an international brand,” adds Bessolo Llopiz, who heads a team creating content for all 46 international editions of Elle, noting that international pages are a big attraction to both celebrities and brands. “[We once] did 35 covers with one shoot. It’s a tremendous power to negotiate who you want,” she adds.

“Since the world is becoming more and more global, we believe that we will see more collaboration between our brands in different countries,” says Dobrotvorskaya, who adds that Condé Nast is “investing heavily” in a centralised editorial hub in London which “will produce content which is interesting on a global scale” for the international editions of Vogue.