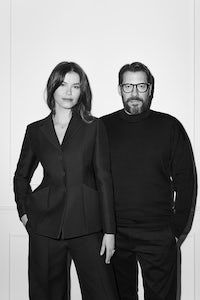 PRAGUE, Czech Republic — Condé Nast International (CNI) is launching Vogue in the Czech Republic and Slovakia. Published under a license agreement with V24 Media, the inaugural Czech print edition will debut in August this year with the September issue, alongside a digital platform.

The print magazine will be published in Czech (allowing for both Czech and Slovakian consumers to read the magazine) and the majority of revenues will supposedly come from print, but "events will also be a strong source of revenues," Karina Dobrotvorskaya, president and editorial director, brand development at CNI, told BoF. While V24 Media co-founders Michaela Seewald and Fabrice Biundo will spearhead the strategic vision for the magazine, key editorial appointments are yet to be confirmed.

The announcement closely follows the launch of Vogue Poland, which debuted earlier this month with its March issue. The Czech Republic and Slovakia edition will be the title's 24th.

The economy of the region is stable and all the ingredients and market dynamics are in place.

"There's a strong appetite for luxury fashion and beauty," CNI chairman and chief executive Jonathan Newhouse said in a statement. "The Czech Republic and Slovakia is a dynamic market with a huge appetite for luxury goods and an interesting and thriving fashion scene," added Dobrotvorskaya. "The economy of the region is stable and all the ingredients and market dynamics are in place. It is the right approach to launch Vogue Czech Republic and Slovakia after Vogue Poland."

Certainly, the prospects in the market are promising. BMI expects the Czech Republic's GDP to grow 3.3 percent this year, while noting that incomes and household spending patterns are aligning more and more with Western European markets. The benefit is falling to retail sales, with BMI reporting that consumers are spending more of their household earnings on premium goods. Credit Suisse's 2017 Global Wealth Report identified the Czech Republic as a "notable case of emerging wealth," with the number of high net worth individuals "predicted to rise substantially over the next five years." This is significant for the growth of a media brand like Vogue, as traditionally its advertisers consist mostly of luxury brands.

The country boasts a large manufacturing sector too, which has bolstered job creation and wages over the past three years — fashion-focused manufactures include Elega and Tonak, which produce premium leather bags and hats respectively. "It is quite lucky in connection with manufacturing [because] they have CzechInvest," explained Hungarian-based fashion journalist Emese Dobos-Nagy. CzechInvest, a government agency that helps domestic manufacturers connect with foreign business partners and provides capital investment, could help as well, says Dobos-Nagy. "In Hungary, the companies are so alone. The situation is so much better in the Czech Republic."

And while growth in the region's footwear and apparel market is modest — currently valued at $2.77 billion, it is expected to reach $3.03 billion by 2022 according to Euromonitor International — Vogue is arriving at a time when the appetite for luxury is rising. "We feel it is the right moment in terms of the maturity of its fashion market. Consumers have been waiting for a luxury publication to reflect this maturity," said Dobrotvorskaya.

It is the right moment in terms of the maturity of its fashion market. Consumers have been waiting for a luxury publication.

The Czech Republic is also home to a dynamic design scene, with Prague Fashion Week — launched in 2010, with Mercedes-Benz signing on as a principal partner in 2013 —  helping to give home-grown talent more visibility. Prague-based fashion journalist and editor Kateřina Čuprová says up-and-coming brands that are gaining wider traction include Laformela and Chatty, as well as local industry favourite Jakub Polanka.

This is something on which the new Vogue edition hopes to capitalise. "My vision for Vogue Czech Republic and Slovakia is to provide a platform for local fashion designers and artists to present their own unique style and approach that is inevitably a reflection of contemporary Czech and Slovak culture," said Michaela Seewald, co-founder and director of V24 Media, in a statement. "I am convinced that the talent here has the potential to have material impact on the fashion world."

And while the Czech edition of Vogue is launching into a media market where global fashion magazine rivals have been present for over two decades — Elle launched in the region in 1994, while Harper's Bazaar arrived two years later in 1996 — the Vogue name does evoke prestige and authority. "Vogue is the fashion bible," asserted Dobrotvorskaya. "Historically, Vogue launching into a new market strengthens the fashion landscape."