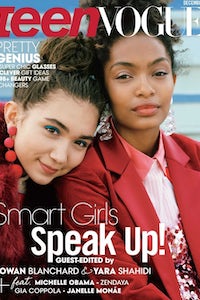 The December 2016 issue hit newsstands one week after the presidential election and was the year’s best seller | Source: Courtesy
Share
Comment
By Lauren Sherman November 2, 2017 12:40

The legacy publisher is set to embark on another round of layoffs. The move, which will trigger the departure of approximately 80 employees, is linked to the overall reorganisation that has been underway at the company for more than two years, as well as new plans to reduce the newsstand frequency of several publications and the elimination of Teen Vogue's print product altogether.

According to sources at the company, other titles set to shrink their print presence include GQ, Glamour, Allure and Architectural Digest (down from 12 issues to 11), Bon Appétit (down from 11 to 10) and W and Condé Nast Traveler (down from 10 to 8).

A Condé Nast spokesperson declined to comment on the reports, although sources at the company indicated the publisher will continue to invest in Teen Vogue's digital platform, which accounts for the majority of the media brand's revenue.

However, the majority of Condé Nast's overall revenue still comes from physical magazines and the company's leadership has gone to great lengths to try and preserve print's "crown jewel" status within the organisation.

In August 2016, Teen Vogue reduced its publishing frequency to four times per year. At the time, editor Elaine Welteroth said that the team — which she led in tandem with digital editorial director Phillip Picardi and creative director Marie Suter — was "reimagining how to engage [readers] more meaningfully in print."

The first two quarterly editions of Teen Vogue averaged 22,590 single-copy sales, according to the Alliance for Audited Media, versus an average of 47,689 per issue in the first half of 2015. As of October, Teen Vogue's average monthly unique visitors for the year were 8.27 million, according to ComScore, up from 1.4 million when Picardi took over the site in April 2015.

While the publisher's marquee brands Vanity Fair, Vogue, Wired and The New Yorker (as well as Brides) will continue publishing their print products in their current cadence, it's telling that recent success stories within the company — most notably, Bon Appétit — are pulling back, facing up to the fact that the medium is just not resonating in the same way it once did with consumers and advertisers alike. (According to data presented in early October by Michael J. Wolf, founder and chief executive of technology and strategy consulting firm Activate, the average American spends only 4 percent of their media consumption hours with print, compared to 20 percent on personal computers and 28 percent on mobile).

In response, Condé Nast has begun to launch new digital-only titles, some under the umbrella of a legacy brand and others standalone. Them, a mission-driven, multi-platform LGBTQ-focused publication was launched last month by Picardi, who also oversees digital for Allure and Teen Vogue.

“Over the past year, we’ve been reimagining what a title looks like to better reflect today’s culture and how audiences are interacting with content,” Condé Nast artistic director and Vogue editor-in-chief Anna Wintour told BoF in October. “As we launched new titles like The Hive [at Vanity Fair] and Healthyish [at Bon Appétit], or rethought existing ones like Teen Vogue and Allure, we’ve seen tremendous response.”

This latest news marks yet another juncture in a period of major transformation at Condé Nast, which began with the promotion of chief marketing officer Pamela Drucker Mann to chief revenue officer in September (following the departure of former AOL executive Jim Norton) and will continue with editorial appointments at two key titles — Glamour and Vanity Fair — that will likely be announced by the end of the year. (Glamour editor-in-chief Cindi Leive and Vanity Fair editor-in-chief Graydon Carter both announced their resignations in September.)

According to sources, the publisher — led by Wintour and chief executive Bob Sauerberg — has cast a wide net for both roles, with Glamour's new editorial head likely to be announced after its Women of the Year Awards, which take place on November 13. Recent names bantered around for that role have included Anne Fulenwider, editor-in-chief of Hearst's Marie Claire, and Amy Odell, director of digital editorial strategy at two other Hearst publications: Redbook and Cosmopolitan.