Today, BoF can exclusively reveal that British contemporary brand Whistles is launching its first physical presence in the US with Bloomingdale’s, continuing an international expansion strategy rooted in department store partnerships.

LONDON, United Kingdom — British contemporary fashion label Whistles is set to launch in the United States with a shop-in-shop, opening today, on the second floor of the Bloomingdale’s flagship on New York’s 59th Street. The move is part of a broader expansion strategy, kicked-off two and half years ago, that has seen the company partner with a number of premium department stores to dip its toes into international markets, including France, Germany, Russia and China.

Since chief executive Jane Shepherdson, who made her name at Topshop, took the helm at the then-ailing middle-market womenswear retailer, Whistles has undergone a successful reboot, becoming known for its modern silhouettes and casual but on-trend pieces at affordable price points. But without cash-rich backers and turnover still significantly below that of many rival contemporary brands (in 2012, sales totalled £48.6 million, or about $82 million, according to data from Companies House) Whistles faced a strategic quandary: how to expand into global markets without massive capital outlays?

“We had decided that we would test the brand within a premium department store in all of the territories that we felt appropriate,” Shepherdson explained. Previously, Whistles has partnered with high-end department stores to enter a number of new markets, launching in Paris with Printemps, in Berlin with KaDeWe, in Munich with Oberpollinger, in Hamburg with Karstadt and in Moscow with Podium and Tsvetnoy Market. Of the brand’s most recent foreign foray into international markets — a move into mainland China in August 2013 in partnership with upmarket department store Lane Crawford — Shepherdson declined to provide specific results, but said she was “very, very pleased” with the performance. “We’re one of their best brands.”

Whistles maintains a wholesale relationship with Lane Crawford and its Russian partners, said Shepherdson, citing the regulatory and bureaucratic complexities of doing business in the Russian and Chinese markets. While not particularly advantageous, the model allows the company to test the waters in foreign markets before making larger capital expenditures. In Europe and the US, however, Whistles operates a more favourable concession model, whereby the company earns larger sales margins and has more control over image and stock.

“We’ve set ourselves up to be incredibly responsive [in Bloomingdale’s],” explained Shepherdson. “So if a certain part of the range sells very well, we’ll put back on what’s not selling and replace it with pieces we think will sell. The learning curve is so steep [in the US] that we need to be in total control of our business there.” 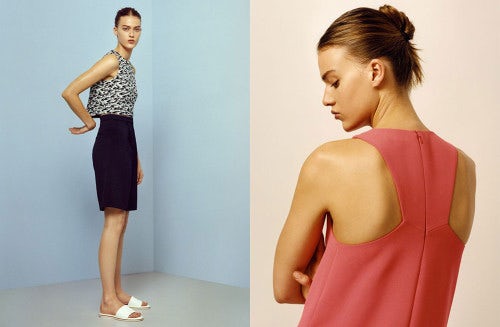 Whistles’ entry into the vast and varied US market comes at a time when similar European brands are also eyeing opportunities in America. COS and & Other Stories, both owned by Swedish apparel giant H&M, are set to open this year in New York. But Shepherdson is confident that there is enough demand to go around.

“What has transpired is that the markets that the brand is working the best in have turned out to be Hong Kong, Paris, Moscow — which typically have a lot more competition but also have a real appetite for fashion,” she explained. “I do think the Americans are quite similar to the way we dress here; sort of [a] slightly sporty, minimal aesthetic. It kind of feels right. I don’t think there is anyone else doing it on the same fashionable level.”

Although the company currently ships to the United States, the concession in Bloomingdale’s will mark its first brick-and-mortar presence in the country.

Indeed, if consumers respond favourably to the company’s initial American foray, the brand is set to pursue similar trials on the West Coast, where Shepherdson believes Whistles’ casualwear will strike a chord: “Cashmere tracksuits, things like that, will be great for us.”

While the US is set to be the brand’s focus for the next few years, Shepherdson is also eyeing Australia. “Australia does incredibly well for us online. And has the highest conversion — it’s usually at number one or two each week for actual sales.”

Shepherdson declined to disclose Whistles’ current sales figures, but said like-for-like sales continue to grow at double-digit rates for the second consecutive year. Accessories and shoes sales have doubled and are set to double again this year. The company’s new menswear collection, which will sit in the same segment of the market as Whistles’ womenswear, will arrive in stores in September.