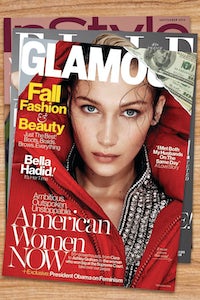 NEW YORK, United States — It’s undeniable that print, as a medium, is in decline. The majority of editorial content is now being consumed digitally and most publishers have acknowledged that the future of the content industry lies online. Indeed, Hearst, Condé Nast and Time Inc. have each announced plans to significantly boost their digital offerings. In many cases, that means trimming the budgets of their print magazines.

But instead of doing away with the print product altogether, publishers are getting creative. Set against a challenging backdrop of falling advertising sales and circulation figures, they are experimenting with a range of ways to cut costs, including pooling staff and sharing content across multiple titles.

Last month, Condé Nast’s Glamour magazine was reported to be undergoing a restructuring, which saw the loss of a number of its staff, including editorial operations and members of its photo and copy desks. The magazine will now share operations and social media staff — as well as copy, research and production departments — with fellow Condé-owned publication Self.

Similar changes are also taking place at Time and Hearst, the publishers of titles like InStyle and Harper’s Bazaar respectively, which have implemented “resource sharing” — creating one central hub of staff to work across multiple titles — for the past few years to help reduce overall costs, in addition to other measures aimed to bolster balance sheets, like raising the cover price of its magazines.

We’re not afraid to set aside long-held orthodoxies related to geographies, structures and the way things were done in the past.

"We are a content company with a platform mentality, and for several years now, we’ve been following a philosophy we call ‘unbound,’” David Carey, president of Hearst Magazines, told BoF. “We focus on constantly improving the earnings of our print and digital properties, and we’re not afraid to set aside long-held orthodoxies related to geographies, structures and the way things were done in the past.”

But can these methods save fashion magazines from what many see as the inevitable decline of print publishing?

“Advertisers follow the eyeballs,” said Alex de Groote, media analyst at Peel Hunt. “There is a long running structural trend in falling print circulation and copy sales, and as that declines or becomes less meaningful then the advertising eventually follows suit. A print publisher makes money two ways really, in a nutshell. Circulation and advertising,” he continued. “Circulation trends are in a decline generally. The only thing you can really do to offset that is to put cover prices up.”

Indeed, rising cover prices can be seen at Condé Nast’s GQ, which recently announced that from October it would increase its newsstand price to $6.99, with March, September, and December issues increasing to $7.99, according to its publisher and chief revenue officer Howard Mittman. "The print market is shifting and changing at a dramatic rate, but the one constant that remains is consumers still understand and appreciate quality,” said Mittman in a statement. Earlier this year, American Vogue also raised its cover price to $6.99, one dollar above its previous price.

Print advertising sales for this year’s September’s issues — traditionally one of the most important months for fashion magazine ad print sales — are very low, according to an industry source, though determining precise performance has become a lot harder since the US Association of Magazine Media (MPA) stopped releasing annual ad page counts last year. The organisation now measures audiences across multiple platforms and formats to provide what it says as a more comprehensive and accurate picture of demand for magazine brands.

In its latest report covering June 2016, InStyle, Marie Claire and Glamour reported year-on-year drops in audience viewing for combined print and digital editions of 3.8 percent, 2.5 percent and 10.5 percent respectively, though Cosmopolitan, Self and Vogue grew by 0.8 percent, 9.7 percent and 7.1 percent over same period. In Britain, only 60 magazines grew sales last year, out of the 442 titles audited by the ABC (Audit Bureau of Circulations), an industry body for media measurement. Across the magazines the ABC surveyed, circulation was down 4 percent year-on-year in the last six months of 2015.

Meanwhile, fashion and luxury supplements — the glossy, advertisement-heavy magazines that are distributed free as part of a newspaper — are thriving. Over the last decade, supplements such as T: The New York Times Style Magazine, WSJ at The Wall Street Journal, and How To Spend It at The Financial Times have bucked the downward trend in print media, consistently growing their advertisers, upping their page-counts, rolling out more editions and turning a profit.

Of course, these newspapers in particular benefit from their wider reach amongst a valuable audience of older and more affluent readers, who are exactly the high-end consumers luxury brands often aim to target. Also supplements are still relatively new, and thus have much leaner cost structures (and less content) than a traditional glossy. That said, the circulation and sales of print newspapers in general are also declining, leaving the future of fashion supplements in doubt.

With increased competition in the market not only from newspaper supplements but, perhaps more significantly, online platforms like Instagram and Snapchat, fashion magazines will have to rely more heavily on sponsored content, advertorials and consumer events to drive revenue and even out the heavy costs of running traditional print publications, including everything from renting office space to hiring staff to actually producing and distributing a paper-based product. Many, in turn, may choose to discontinue their print editions, or shutter them completely. Indeed, last year Condé Nast closed men’s style magazine Details. Lucky also appears to have folded quietly, despite attempts to reduce its print presence to a quarterly issue and then shift to a singular online platform — it’s website, Lucky Shops, now redirects to Glamour.com.

That said, de Groote acknowledges that print may not disappear any time soon, even as its reach and influence shrink. “The generation that really love print, they are going to be alive for another 40 years, they will keep buying it,” he said. “But ultimately, over time, those people will get older and the next generation will probably come through. Culturally [the next generation] is less interested in print.”

Of course, the shift away from print also comes with opportunity for legacy publishers who can innovate and adapt to changing media habits by leveraging the existing brand equity of their titles to build strong digital products. “Everybody is facing the same pressures,” continued de Groote. “Nobody can withstand this structural change to the industry. It gives rise to opportunity but its very disruptive to existing models. It will bottom out eventually, but it will take a little while yet to do that.”