This month, our Spotlight shines on Cottweiler, a British menswear label determined to bring refinement to the streetwear category, who will present their first runway show on Saturday at London Collections: Men.

Cottweiler’s roots go back a decade to when designers Matthew Dainty and Ben Cottrell met while studying fashion at the University of West England, in Bristol. In a class dominated by girls, the two gravitated towards one another and quickly cemented their friendship during a school trip to Paris, where they decided to ditch the school’s extra-curricular activities and plunged headfirst into a local techno club. “That attitude continued throughout our studies,” says Dainty, who was born in New York but spent his formative years in Essex in the UK. “We would separate ourselves from the class and work in our own world.” 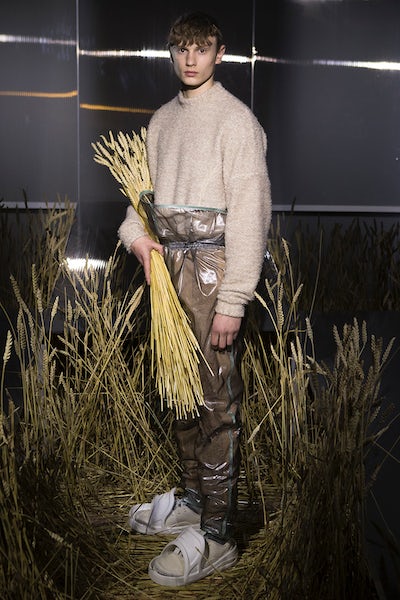 After graduation, the duo worked for larger brands but kept their label Cottweiler — a portmanteau derived from Cottrell’s surname and Dainty’s mother’s maiden name — under the radar for several years. “We knew we wouldn’t be able to produce the quality or have longevity by going straight from university into trying to do production and meet deliveries and fabric minimums. [And] we wouldn’t be able to afford it,” says Dainty, who worked for Kim Jones on his collaboration with Umbro, while Cottrell cut his teeth on Savile Row for six years at Ozwald Boateng.

Cottweiler’s commercial breakthrough came in 2012 when the designers began selling their wares to UK retailer Primitive London. Word of mouth soon led the buying team of Mitsuhiro Kubo, owner of the Japanese streetwear boutique GR8, which stocks brands such as Astrid Andersen and Rick Owens x Adidas, to discover the label. “I still remember the first time I saw them,” Kubo reminisces. “Immediately after seeing their first collection, I felt that I got a clear understanding of what East London has to offer.”

Dainty remembers the encounter well too.  “Before we knew it there were five Japanese buyers in our studio, trying on everything, and they ended up buying the whole collection,” he says. “We started our first season in [fashion agency] Nana Suzuki’s showroom in Paris with four stores and within a few seasons we grew to 30 stores. With her help, we’ve been able to manage our growth carefully and be selective about where we are stocked.”

Cottweiler’s concept-led design, made from performance fabrics like waterproof wools, thermal and moisture-wicking fabrics, windproof membranes and bonded materials, sets the menswear label apart. In contrast to conventional sportswear, which is often covered in logos and branding, the designers were adamant about keeping their luxurious designs logo-free. “I had some experience in branding for other designers and quickly ended up hating pointless logos that spoilt a perfectly good garment,” says Dainty.

According to Daryoush Haj-Najafi, senior editor of the UK edition of Complex, Cottweiler is the type of brand that speaks eloquently to a new fashion generation. “Snobs see all sportswear as a form of class tourism but for the Cottweiler fan and a generation submerged in post-internet aesthetics, an almost-transparent mesh or an iridescent liquid black track suit is seriously beautiful,” he says.

Today, Cottweiler is stocked by 26 international retailers, including Boon the Shop in Seoul; Joyce in Hong Kong; Nordstrom in Chicago, Dallas, San Francisco, Seattle and Washington DC; Ssense in Montreal; Machine-A in London; KM20 in Moscow; and Opening Ceremony in Tokyo, New York and Los Angeles. It has also won the support of musicians like FKA Twigs and Skepta. “The brand has become something of a cult favourite,” says Jesse Hudnutt, men’s buying director for Opening Ceremony.

For Spring/Summer 2017, Cottweiler envisioned a future European community representing a new Mediterranean. “The inspiration originally came from an archaic Cycladic sculpture that was passed down to Matthew from his grandmother, who was from one of the Aegean Islands,” says Cottrell. “This sculpture became the starting point for our research into the importance of the Mediterranean, past and present.”

For this month’s Spotlight, Cottweiler has designed a custom BoF logo that shows the 3D mapping of a conch shell to symbolise the brand’s amalgamation of nature and technology. “We’re especially interested in clothing like chemical protection-wear and safety-wear for builders. We like to combine some of these highly functional aspects with softer, more natural aesthetics, which is why we often clash nature with technology,” Cottrell explains.

Looking ahead, the duo hope to continue presenting seasonal collections but without succumbing to the pressures of the fashion industry. “We want to be here for a long time. We aren’t interested in trends, fads or gimmicks,” says Cottrell. “We want to be able to build a following [of consumers] who appreciate the quality and the concept behind what we do. We feel that’s relevant and that’s why the process is long and gradual,” agrees Dainty.