LONDON, United Kingdom — It's been almost 20 years since Nike debuted its successful "NikeiD" initiative, which allows consumers to configure their own sneakers with thousands of possible colour and material combinations. The service leverages what product strategists call "mass customisation," a mode of production that combines some of the benefits of traditional craft production with the efficiency of modern-day manufacturing.

Mass customisation offers value to both brands and consumers. For consumers, it offers greater product uniqueness and deepens emotional engagement with both products and brands. "You create a relationship and a dialogue [with customers] so that they return time and time again," said Vashi Dominguez, founder of customisable luxury jewellery brand Vashi.

Plus, customisation is increasingly what consumers who are more used to personalised digital experiences on platforms like Instagram and Facebook have come to expect: "Pivitols and Millennials expect to be able to change things," explained Hal Watts, co-founder and chief executive of fashion-tech company Unmade, which uses digital manufacturing files so that unique and small-run orders can be made at the same cost and speed as mass-produced items. "They want to be involved in the conversation of the brand and what the evolution of the product is."

Millennials expect to be able to change things. They want to be involved in the evolution of the product.

Then, there's the practical issue of fit: "Every body is unique," argued Joseph Pine, a strategist and author of the book "Mass Customization: The New Frontier in Business Competition." "Fashion retailers should understand that the best way to show off your garment is if the clothing actually fits the body perfectly."

Mass customisation can also boost business productivity by better aligning supply and demand, eliminating waste. "If you mass customise, you don't produce product until the customer says 'This is what I want,'" said Pine. "There is so much money lost to inventory that's produced and nobody wants. Brands would have higher margins because they wouldn't have to put things on sale."

And yet luxury fashion — a sector born from a bespoke tradition — has been slow to seize the opportunity in mass customisation. A recent report by business intelligence firm L2 found that out of 48 high-end luxury brands surveyed, just 21 percent offered any kind of customisation services at all.

Of the luxury houses that do offer product customisation, most have stuck to simple applications like monogramming and charms. Louis Vuitton, for example, has offered its Mon Monogram service since 2008, allowing customers to add initials and coloured stripes to core styles (last summer, the brand also introduced the option of selecting a range of "patches" reminiscent of heritage travel stickers). Dior launched a bag customisation initiative last year, which allows customers to personalise the Lady Dior model with up to three badges.

Some have gone further. Back in 2011 Burberry introduced Burberry Bespoke, a robust trench coat customisation tool. But the service quietly folded at the end of 2014 and was replaced by a simple trench coat monogram service. Prada has been operating made-to-order services since 2003, giving clients the option to choose the materials and colours of items such as bags and wallets. But today, it's most far-reaching offering, the made-to-order pumps project — which allows customers to select the heel height and colour palette of a shoe, with an option to add initials to the metal of the sole — is only permanently available at the Galleria Vittorio Emanuele II Milan store, the Epicentre store in Aoyama, Tokyo, and in the Middle East. No customisation options are currently available online, however, Prada Group's strategic marketing director Stefano Cantino noted that the brand's services are "in constant evolution."

Gucci's DIY service, which launched in 2016, goes beyond simple product initialling. Men's eveningwear pieces can be adapted with various fabrics, buttons and linings, while women can opt for a unisex bomber or denim jacket where embroidery and patch options — all instantly recognisable as part of Alessandro Michele's Gucci lexicon — can be applied; bags and shoes can also be modified. But while the offering is relatively impressive, Gucci DIY is only available in select locations, with no online presence. Last year the brand partnered with e-tailer MyTheresa to launch the service on its website, but it was confined to monogramming initials on the popular Ace sneaker and was only available for two weeks.

"If you think about all the accessible luxury that there is with shiny gold initials on, it still doesn't mean anything," observed designer Anya Hindmarch, whose namesake brand offers a spectrum of customisation services that range from embossing shoppers' own handwriting onto leather goods, to made-to-measure bespoke and its "Build a Bag" tool, where customers select the colours, straps and accessories for their tote via an online interface or in store. "Anyone who is a real luxury customer is a bit tired of that." 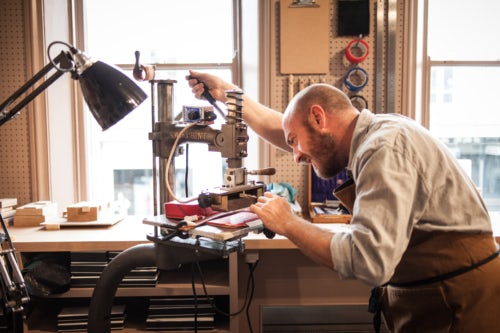 Like Gucci's efforts, Hindmarch's configuration of permanent services is pretty unique in the luxury space. "It's so much part of our DNA," she mused. "So, we've found ways of doing it, but there's a lot of thinking and complexity and work that goes into making it so it's manageable."

Pine attributes fashion's inertia in the space to its inventory-led, mass-production mentality. "What companies need to do is develop a pull mind-set that says we pull out from the customer their individual wants and needs, and then we go and produce it on-demand," he said. "The number one notion they have to leap over is that of, 'I have to have inventory.'"

Deciphering how much creative control to surrender to consumers is another hurdle to navigate. On the one hand, brands are right to be hesitant about handing over design power to the customer: a specific creative point of view is integral to the identity of a luxury brand, and, without the hand of the designer, poor design choices could lead to a final product that is not aligned with the brand vision — or a creation that the customer regrets.

Equally, presenting too many design options can overwhelm customers, leading to abandoned efforts for fear of making the wrong choice. This is the "easiest mistake mass customisers make," said Pine. "Fundamentally, customers don't want choice, they just want exactly what they want."

To strike the balance, brands must be careful about designing the customisation experience itself by setting clear parameters for the consumer to play within. "They need to turn that world view they're creating from one individual product to one of architectures of products, in which they still get to say what the possibilities are," said Pine. "You want to feel like you're having a conversation with the designer," agreed Unmade's Watts. "That you're changing things, but that they've clearly set the intent and, whatever you do, you're going to end up with a beautiful product that is their design and creative content."

More challenging still is operationalising a mass customisation model: scalable, timely production remains difficult, as does creating a high-quality customisation interface that consumers can easily interact with. "Front end is crucial to making this work," stressed Pine. "And then on the back end, you need the processes and the technology to be able to cut things individually and efficiently."

There are platform players, however, utilising new technologies to provide solutions that will help luxury brands overcome these front- and back-end operational hurdles, with the potential to transform the way the luxury industry approaches the customisation opportunity.

On the front end, e-commerce platform Farfetch understands the need for an effective, photorealistic design tool. "Luxury and fashion are extremely visual. It's an experiential industry, that's exactly why the rendering is absolutely key," asserted founder and chief executive José Neves. Last November, Fendi partnered with the platform to develop a customisation software that would allow shoppers to personalise its Kan I F style bag. 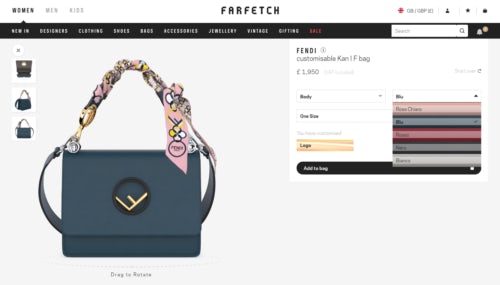 "Mass customisation is the next phase of the internet," former Fendi chief executive Pietro Beccari, now chief executive at Dior, told BoF. "People want to play around and create things themselves. They see the life of a creative person and they want to play God for once. They want to be the one choosing things that make them feel even more part of the world that they like."

Thanks to the collaboration, Fendi's customisation service will also benefit from heightened global exposure. “Fendi is now customisable for Chinese consumers, for Korea or Japan or Russia or Latin America; it’s immediate global reach,” explained Neves. “That’s an advantage you get by being on Farfetch, really capturing that multi-brand consumer that may not have heard about the Fendi customisable bag.” This is significant given that multi-brand stores account of 78 percent luxury goods purchases online, according to a recent report by Deloitte.

On the manufacturing side, Watts' company Unmade is helping solve the issue of scalable, efficient production of unique products. Unmade technology takes all the data from an e-commerce order and transforms it into a digital manufacturing file, which connects to a factory machine to create the product from scratch. The complexity of processing unique orders is eradicated as there are no manual steps between point of order and machine manufacturing; the machine is custom controlled for each unique product, while similar unique orders are grouped, keeping costs down.

"Unlocking that data flow and being able to connect the supply chain more efficiently is what will enable customisation and on-demand manufacturing to be used far more broadly," Watts explained. "That's really where we see the future of our business," he added, "in being the platform that communicates between brands and factories and consumers a lot more efficiently."

For a lot of the industry who are not as technologically savvy [or] don't have the finance to invest in this kind of initiative, a platform is going to be essential.

Fundamentally, platforms such as Farfetch and Unmade give brands instant access to the necessary technology to enable an efficient and scalable mass customisation process worthy of a luxury customer experience — something that would require significant time and capital investment were they to go it alone.

"A couple of big brands have tried to solve it themselves, but that has required huge resources," said Watts. "I think for a lot of the industry who are not as technologically savvy and many who don't have the finance to invest in making this kind of initiative, a platform is going to be essential."

Neves has no doubt that we're at an inflection point for mass customisation within luxury. "I think it hasn't taken off yet because the technology wasn't there," he said. "As technology develops so that visual customisation evolves, and the supply chain adapts, we will make progress towards an industry that is customisation led."

Will Mass Customisation Work for Fashion?

Finding the Luxury in Mass Customisation