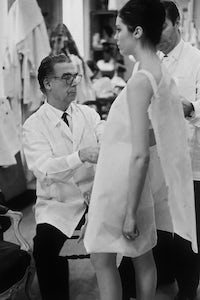 GETARIA, Spain — Balenciaga's final words when he closed his couture house in 1968 are reputed to have been, “It's a dog's life.” Whether they were or not will never be proved either way now, but they don't quite have the ring of truth to me. When we consider that the life and work of the couturier, whose name, even 43 years since his death, regularly tops any list of “greats” in 20thcentury fashion, it seems unlikely, bearing in mind that he took his work very seriously, Balenciaga could not look back on his career and find something to make him happy. Certainly, with hindsight, it seems that everything he did in the early 50s until he gave up was studied, intellectualized — even perfect. No wonder Cristobal Balenciaga is still rightly described as “the designer's designer.”

Born in 1895 in the Basque fishing village of Getaria, he was one of three children whose mother, after the early death of her husband, supported the family by working as a seamstress. There is, of course, reason for caution when trying to assemble facts from over 100 years ago, especially for the very poor: there are no scribes for the humble, as there are for the great. For that reason we have the well-worn, but never officially authenticated tale that Balenciaga was a precocious child, fascinated by his mother's work and always by her side. Reputedly his first introduction to fashion, as opposed to the basic clothing which his mother wore came about because he admired the Drecoll tailleur of a local aristocrat, the Marquesa de Casa Torres, one day in the street and told her so. She then — so the legend goes — invited him to copy it.

Was it clever PR to suggest the tale in order to soften the public perception of his persona? What is undoubtedly verifiable is the fact that Balenciaga did not like the press and had, so little time for their judgement that whilst a collection was being presented he would close himself in his study and begin working on his ideas for the next season, apparently indifferent about what they might write.

Cristóbal Balenciaga was the consummate professional — a total perfectionist. Although he was susceptible to young men and, like Dior, had lovers, his heart was given to cloth and line. He created marvellous evening gowns, for which the French word “frou-frou” is barely adequate. But it was his dedication to tailoring that gave him a mastery untouched by any other couturier, with the exception of Charles James, for whose technical skills and endless experiments Balenciaga had a great admiration, much like he admired Christian Dior. One may add Hubert de Givenchy, with whom he had a close creative relationship, as well as Carmel Snow, editor of Harper's Bazaar and Diane Vreeland as occasional acquaintances, but that was about the extent of his critics, colleagues and friends he admired.

Private, introvert and, on the surface at least, austere, it is a truism that Balenciaga dedicated most of his working hours to perfecting and simplifying his cut and line. Like Madame Vionnet, he didn’t sketch and always began with the cloth. Hardy Amies once said to me that the couturier's job was to do honour to cloth and it is the perfect description of Balenciaga's life-long obsession. Many years ago, I was told by a friend of his, that whenever Balenciaga could not sleep, he could be discovered sitting by a window, folding the fabric of the bottom of the curtains over and over until the problem was solved.

And, if it wasn't solved, no matter how interested in the idea, it never came to fruition as a garment. Nothing but a totally successful realisation of the dream was ever seen by anyone but his staff and assistants, including André Courrèges, who once compared working with Balenciaga to being like a novice undergoing training for holy orders. A fitting comparison, as clothing was once described by a journalist as Balenciaga's religion, although he was a devoted Catholic and clearly gained much inspiration from the church. It isn't hard to imagine him, as a teenager in Spain, looking at sculptures of Christ on the cross, surrounded by saints and angels, and taking a keen interest in the drape and fall of the garments.

Balenciaga opened his first dressmaking establishment in San Sebastián before World War I, and a second in Madrid in the 1920s. They were called Eisa, a shortened version of Eisaguirre, his mother's maiden name. He made frequent buying trips to Paris, purchasing clothes from legendary names of the time including Chanel, Vionnet, Lelong and Schiaparelli that, on his return, were carefully taken apart so that he could examine the techniques and special 'tricks' that any great designer has as part of a garment’s unique DNA.

It is important to remember that, like most of his contemporaries, Balenciaga was self-taught. In those days of no fashion colleges or educational establishments apart from the ones educating often illiterate young women in how to sew — a role also taken by churches, where the nuns taught their skills to village girls so that they could make at least some money for their often poverty stricken families — tailoring and dressmaking were learned by practical experience, not theory.

One of the reasons why Chanel did not include Balenciaga in her denunciation of other homosexual couturiers such as his contemporary, Dior (all of whom she accused of designing clothes that insulted women by dressing them in fussy fashions), was because she admired his technical skills. She accepted that he could cut and sew better than anyone else working in Paris — and may even have known that every Balenciaga collection contained one garment entirely made by the maestro himself — although which one was never specified.

Were he to return Lazarus-like to the fashion world of today, Balenciaga would be bewildered by how young the current age of fashion is. He designed for a very specific woman. Expected to be of a certain age, certainly no younger than 25 and with no upper limit, provided that she was still able to move with energy, grace and a certain hauteur. He never wanted his clothes to be seen on stick thin figures. As one of his vendeuses (saleswomen) reassured a client who confessed to having put on a little weight since the last fitting, “Oh! Monsieur is quite happy with a woman with a stomach,” although as all fittings in the atelier were performed in monastic silence, and Balenciaga did everything he could in order to avoid meeting his customers face-to-face, hardly ever fitting any of them himself, it is hard to imagine how she would know.

The diaries and correspondence of the time make one consistent exception to this rule. Although he would socially meet women such as Bettina Ballard, the influential Vogue editor based in Paris, it would seem that it was only Carmel Snow, editor-in-chief of Harper's Bazaar who was treated as a friend on her twice-yearly visits to the Paris shows. In fact, there is evidence that his famous collar, small like a child’s shirt collar and standing proud on the back of the neck, was originally designed with her in mind.

How to sum up this protean figure and his achievements? His work has been called sculpture, architecture, and even furniture. It has been praised for its “austere simplicity.” But that is only to look at the later work. His clothes from the late ‘30s and early ‘40s often look over-decorated in their opulence today, and they were not alone. It was not until Dior's “New Look” of 1947 that Paris gained its new, elegant voice — and so did Balenciaga. By the early ‘50s, Dior and Balenciaga were the twin leaders of Paris fashion, but Balenciaga's retreat into anonymity had begun. He was the first couturier to step outside the Chambre Syndicale system when in 1956, annoyed by American copyists, he shared his collection one month after the official Paris dates. It was not perversity; it was to preserve the integrity of his designs. Givenchy followed and even Yves Saint Laurent took up the fight, briefly banning press from his shows.

Balenciaga was an obsessive. His garments were not designed to please his customers, but to please himself. Nothing left the premises without his approval. He never sprang surprises as other couturiers did, with new ideas every season. All of his collections were a work in progress, a continuum to explore and develop ideas and ways of using fabrics, many of which he cut himself, using either hand with equal skill. But it was only in 1952 that he produced his own game-changer. Described by Carmel Snow as “the semi-fitted look,” it was tailored at the front, but full and billowing at the back. It was the beginning of the one-man revolution that led to the sack dress, the tunic and shift, and eventually to the Baby Doll and mini skirts of Courrèges and Mary Quant as well as the space-age fantasies of Pierre Cardin. On that evidence alone, Balenciaga can, with justification, be called the father of late 20th century fashion. At the height of his powers in the ‘50s and ‘60s, Balenciaga dressed every woman of style from the Duchess of Windsor to Marella Agnelli. Diana Vreeland told me that when he closed his business, Mona Bismarck, one of his most faithful clients, locked herself away in her Capri villa for three days, unable to imagine life without his clothes. Lunacy or loyalty, it certainly says something about what his clothes gave to women, even though his prices were the highest in Paris. But worth it, surely, to be dressed by the man who Cecil Beaton claimed had “created the future of fashion.”